The Champion of Slavonic Peoples: the Andrija Kačić Miošić collection in the British Library

Andrija Kačić Miošić (1704-1760) was a Franciscan friar, reader in theology and philosophy at religious schools in Venetian Dalmatia, and a national poet. He wrote three works in his lifetime, all printed in Venice: Elementa peripatethica juxta mentem subtilissimi doctoris Joannis Duns Scoti in 1752, a philosophical textbook derived from the works of John Duns Scotus; Razgovor ugodni naroda slovinskoga (‘Pleasant Conversation of the Slavonic People’); and Korabglicza (‘Little Ark’), a collection of biblical stories and Slavonic chronicles from the beginning of the world to his time which was his last work, published in 1760. The most important of these, for which he is best known, is Razgovor ugodni, an epic history of the Slavonic peoples in prose and in 136 epic poems, first published in 1756 with a definitive second edition in 1759. 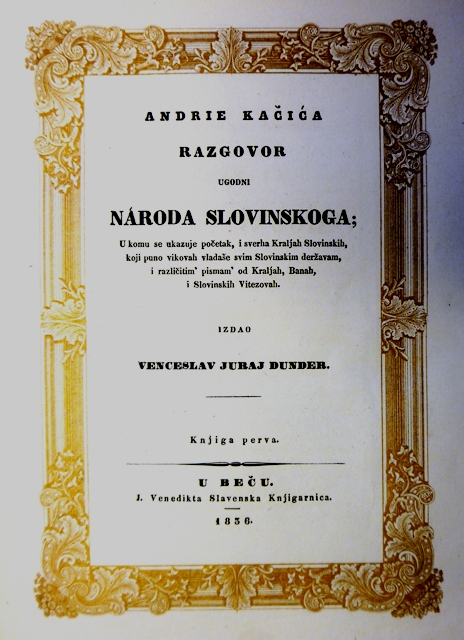 The significance of Razgovor ugodni lies not in its literary merit but in the influence it had on generations of Slavonic people in the Balkans. Kačić Miošić wrote mainly in the Ikavian (ikavica) variant of the Štokavian dialect in Latin script, a language which the common people could read and understand as their own everyday spoken language. The Štokavian dialect became the foundation of the literary languages developed in Bosnia and Herzegovina, Croatia, Montenegro and Serbia in the 19th century.

Razgovor ugodni aimed to instruct and inspire the people of the Balkans by their glorious past and to instil the values of national heroism and confidence in the struggle against the Turks. Kačić Miošić wanted the people to remember who they were and where they came from as the important legacy of their honourable past. His poetry did not aim to achieve literary heights, nor did his prose strive for historical accuracy based on documentary evidence. He drew mainly on the available Latin, Italian and Croatian printed sources, as well as on the scarce historical records, but his true inspiration came from his enthusiasm for the Slavonic peoples, especially his admiration for their common efforts in the long struggle against the Turks in the Balkans over a period of two centuries. Kačić Miošić travelled extensively to learn at first-hand about this struggle from people who had orally preserved their national tradition, myths and legends and passed them on for generations. His poetry celebrates the unity, endurance, dignity and faith of the Slavonic peoples and their allies against their oppressors and laments those who have not yet set themselves free. 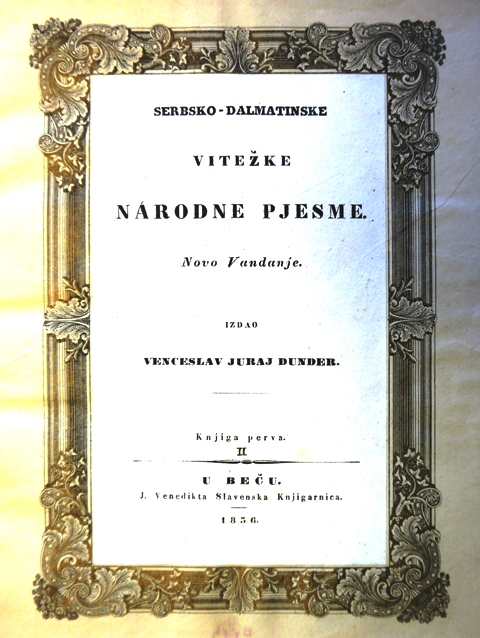 Razgovor ugodni was therefore inspired by the idealised history, folk tradition and myth of the Slavonic peoples which Kačić Miošić presented passionately to his readers in stylized decasyllabic verses modelled on national folk poetry. No book before or since has seen more editions in Croatian literature. It was referred to as ‘the people’s songbook’ and became an all-time favourite, printed in 64 known editions from 1756 to 2011. Kačić Miošić was the first Croatian writer to whom a monument was erected, in Zagreb in 1891. Razgovor ugodni was printed in 12 Cyrillic editions from 1807 to 1939. 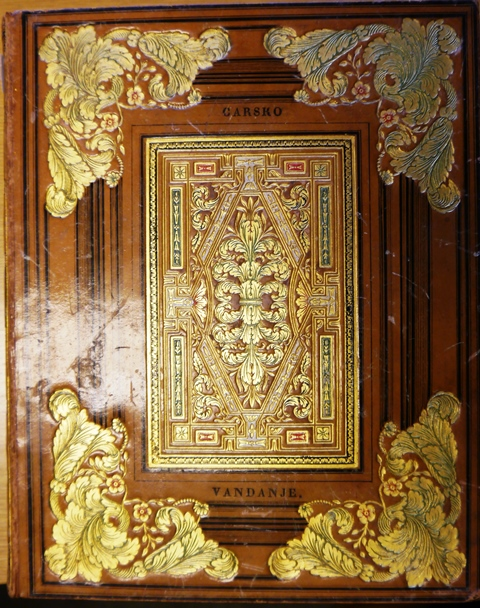 In 1836 one Venceslav Juraj Dunder (a pseudonym for Vjekoslav Babukić published the 10th edition of Razgovor ugodni in Vienna as ‘Novo Vandanje’. An elegant and richly decorated two-volume bibliophile copy of this edition named ‘Carsko Vandanje’, (the imperial edition), was beautifully printed on fine paper with gilded edges, and decorated with an ornament on each page. The volumes were bound by C. G. Müllner’s workshop in Vienna in calf leather, blocked in colours with gilt and black tooling with leaf corner-pieces. (For a more detailed description see the British Library database of bookbindings.)  This ‘imperial edition’ was not a complete edition of Razgovor ugodni. It includes 58 poems from the definitive 1759 edition. 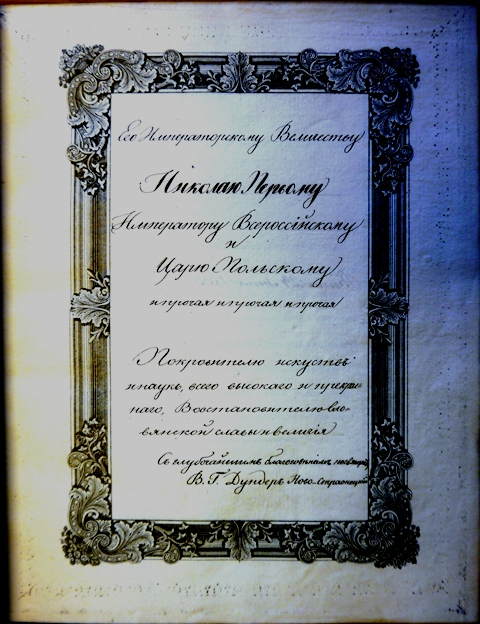 Manuscript inscription in Russian with a dedication to Nicholas I, Emperor of Russia. RB.23.b.7396, volume 2

This unique copy of Razgovor ugodni was produced as a presentation copy for Tsar Nicholas I of Russia. In the period of national revivals in 1830-40s Kačić Miošić was celebrated and reprinted as a national poet whose vision was the Slavonic peoples’ interdependence and the common purpose of unity and collaboration for cultural and political progress, freedom and emancipation. It is evident from this presentation copy that Dunder shared Kačić Miošić’s sentiments and his understanding of the mutual Slavonic ties and goals. 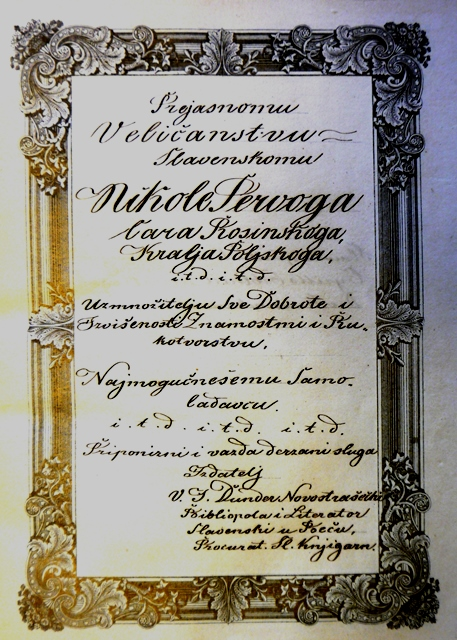 There are three manuscript inscriptions in the second volume on ornamented flyleaves. The first is in Russian, dated 24 June 1835 and recommending the book to the Tsar as a learned work created in the “Slavonic homeland.” The second is a Croatian dedication to the Tsar, and the third is Dunder’s six-page discussion of the “Serbo-Illyrian language” and the correct reading of the new orthography. 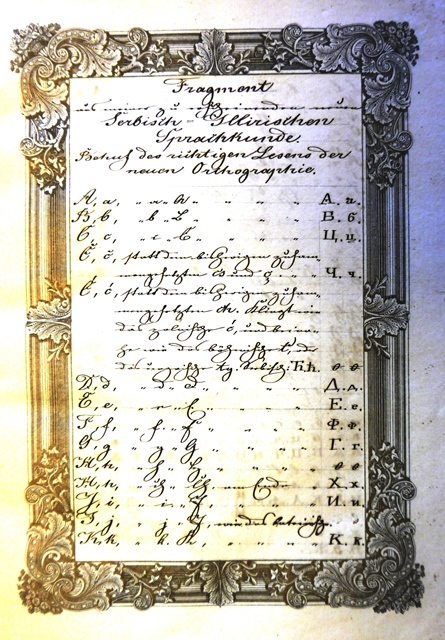 Dunder’s text on the new Serbo-Croatian orthography which he promoted, RB.23.b.7396, volume 2 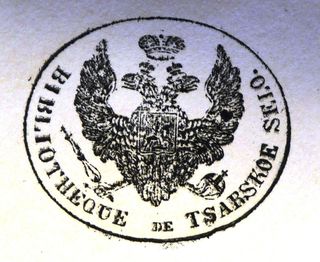 Both volumes bear the stamp “Bibliothèque de Tsarskoe Selo” (left) which reveals the book to have been part of the private library of Tsar Nicholas I at Tsarskoe Selo near St Petersburg. It must have left the Russian Imperial Library in or before 1933 as it was advertised for sale on 20-21 June 1933, with other treasures from Austrian and Russian Imperial libraries, by the auction house of Gilhofer and Ranschburg. It is entry no. 227 in the catalogue of the sale (11910.t.27.) and images of the front cover and spine of volume one are shown in plate 21. The book was valued at 160 Swiss francs. The Zagreb daily Obzor reported on the auction and appealed to the public to raise 2000 Yugoslav dinars for the purchase of “the lavish edition” of Kačić Miošić.

The British Library holds a significant collection of Razgovor ugodni collected over a period of over 160 years, from 1847 to the present day. This comprises nine 19th century editions of Razgovor ugodni, seven in Latin and two in Cyrillic scripts:

Zagreb, 1851; 11303.l.25. A inexpensive edition called “Pjesme” (Poems) printed in the spirit of Kačić Miošić to be affordable by ordinary people;

Zagreb, 1862; 12265.cc.6. Another inexpensive edition with Babukić’s introduction revealing that he had prepared Razgovor ugodni for publication in Vienna in 1836 under the pseudonym “V. J. Dunder”

The first of the two Cyrillic editions that the library holds (011586.f.74.) printed in Zemun in 1849-50 in two volumes with the title  Србско-народне витежке пјесме (‘Serbian-folk chivalrous poems’), is a selection from Razgovor ugodni.  The other (012265.e.5/81.) was printed in Pančevo in 1890 in the Braće Jovanović bookshop’s popular series Narodna biblioteka (National library) and was presented together with 250 books from this series to the Library by the Serbian Legation in 1920.

Trieste [i.e. Dubrovnik], 1831 (from the National Library of Austria)

Dubrovnik, 1839 (from the National Library of Austria)

Vienna, 1836 [vol. two only] (from the National Library of the Czech Republic)

Zadar, 1851 (from the University of Wisconsin – Madison)

Venice, 1782 (from the National Library of the Czech Republic)

Dubrovnik, 1833 (from the National Library of the Czech Republic)