A minor by-product of the Charlie Hebdo controversy has been the realisation that even in their less controversial cartoons the cartoonists made sure the figures they were lampooning were recognised because they were clearly identified in a caption. 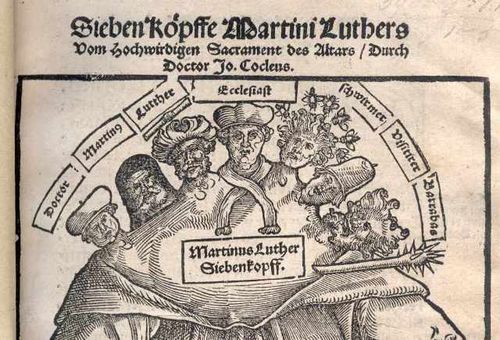 Classical and medieval rhetoricians distinguished simile (which makes clear what is being likened to what) and metaphor (which doesn’t). Quintilian says:

In general terms, Metaphor is a shortened form of Simile; the difference is that in Simile something is [overtly] compared with the thing we wish to describe, while in metaphor one thing is substituted for the other.—Institutio Oratoria, 8.6, 8–9.

The same distinction obtained at a higher level between “full allegory” and “mixed” (Quintilian 8.6.44-53): full allegory doesn’t tell you what it means (El espíritu de la colmena or The Prisoner being modern examples which have perplexed me over the years) while mixed prefers labels and personifications (like Pilgrim’s Progress, with Mr Worldly Wiseman and the Slough of Despond).  Calderón wrote two versions of La vida es sueño: a comedia with characters called Segismundo, Clotaldo et al., and an allegorical auto sacramental, where these become Man and Wisdom.

My granny had a hat which my mother used to say made her look like the poster “Keep death off the roads” (I have to point out in filial piety that the resemblance was limited to the hat.) The relationship between image and word here is a subtle one:  we understand easily that the spooky lady is Death with a capital D, but we also need the prompt from the text.

In modern (and early modern) times it’s seen as bad form to use words to explain an image: as Cervantes has it:

“Thou art right, Sancho,” said Don Quixote, “for this painter is like Orbaneja, a painter there was at Ubeda, who when they asked him what he was painting, used to say, ‘Whatever it may turn out’; and if he chanced to paint a cock he would write under it, ‘This is a cock,’ for fear they might think it was a fox.” (Don Quixote, II, lxxi).

A common exchange from my childhood was:

“What are YOU looking at?”
Dunno: the label’s dropped off.”

Doubtless an allusion to Quintilian.