Shevchenko: a voice for unsung heroines

We all have in our hearts some lines of poetry which struck us like lightning when read for the first time. For me such lines were the beginning of Taras Shevchenko’s poem Maryna: “Nenache tsviashok v sertse vbytyi / otsiu Marynu ia noshu” (“Like a nail driven in the heart, / I carry this Maryna with me” [translated by Peter Fedynsky])

As a teenage girl in Ukraine I could not stop thinking about Maryna and her tragic fate. Shevchenko wrote this poem in 1848 –  his second year of exile as a private soldier near the Aral Sea.  Memories and stories from his childhood and two recent visits to Ukraine (before his arrest, imprisonment, trial and condemnation to 10 years of soldiering) flooded his imagination. 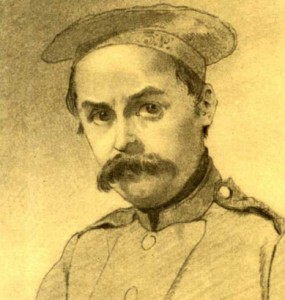 Shevchenko. Self-portrait as a soldier, 1847 (From Wikimedia Commons)

The tragic story of Maryna, a newly-married young woman, who was spotted by a lusty landowner during her wedding and consequently made one of his many mistresses, would not leave him day or night and so it needed to be told, as well as stories of other women, usually serfs, by whose fate he was touched and with whom he empathised so much. In fact it is very hard to find in the whole of world literature another poet who would express his empathy for women so warmly and in such a passionate way as Shevchenko. As we have just celebrated International Women’s Day  and now are commemorating Shevchenko Days (9-10 March) it is appropriate to say something more about the women in his poetry.

As the literary critic Myroslav Shkandrij noted in his blog “Shevchenko’s Relevance Today” :

[…] perhaps no other great poet has been so woman-centred. The fate of his female characters dominates his poems and stories. The deceived and abandoned girl, the enslaved, wronged or suffering woman are recurrent images, and their stories provide the basic narrative of many works. Yes, this feature of his poetry can be interpreted as a trope – a metaphor for the situation of the Ukrainian people -- but it is also a metaphor for the situation of all the vulnerable, voiceless, and subaltern.

The best known and most translated poem by Shevchenko is Kateryna (the British Library holds translations into many languages, including one into Esperanto: Katerino, Paris, 1912; RB.23.b.6700). Shevchenko dedicated it to Vasily Zhukovsky, the famous Russian poet who contributed so much towards Shevchenko’s own emancipation from serfdom in 1838. The heroine of the poem, Kateryna, is a village girl who fell in love/was seduced by a Russian officer when soldiers of the Russian imperial army stayed in her Ukrainian village. The officer leaves. Kateryna gives a birth to a boy and is ostracised in the village. Her strict conservative parents throw her and the baby out of their house. Kateryna tries to find the officer and commits suicide after his rejection.  Generations of Ukrainian women, many of whom could not read and write themselves, shed tears about the fate of Kateryna and knew many lines from this poem by heart. Shevchenko, being a very gifted painter,  also painted his heroine. 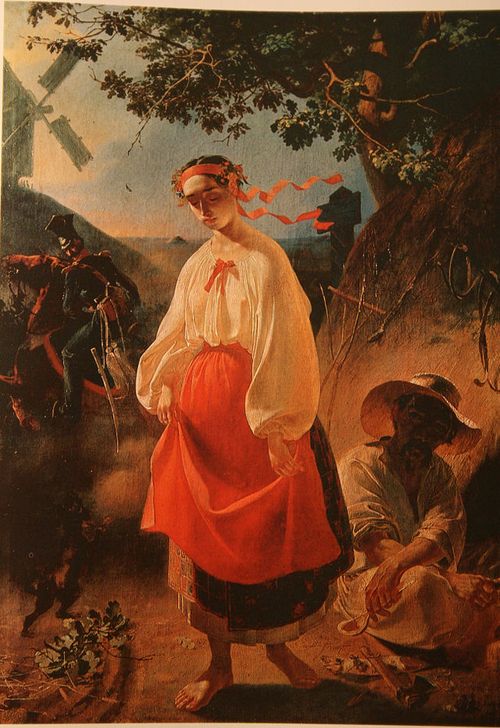 Shevchenko was orphaned very early: his mother died when he was nine years old and his father when he was twelve. As an orphan and a serf in the estate of the rich land-owner Pavel Engelhardt  he was separated from the rest of his family at the age of thirteen and  taken to St Petersburg.  Yet the fate of women serfs was often even harder. In St Petersburg Shevchenko composed his first ballads based on the rich Ukrainian folklore: Prychynna (‘Bewitched’, 1838), Dumka (‘A Thought’, beginning  “What good are my dark brows to me…”, 1838), Topolia (‘The Poplar’, 1839) and others. In Topolia a young girl in love, whose "dearly cherished"  Cossack  "went away and perished", is transformed into a poplar by the depth of her sorrow. Her story is well-known, so "the chumak on his journey sees it,/ Bows his head before it; /The shepherd with his reed-pipe sits / On the gravemound on the morning, / Sees it and his heart is aching..." (translated by Vera Rich).

After writing a lot about Zaporozhians and the great Cossack past of Ukraine Shevchenko returned to the fate of women during his two journeys to Ukraine (1843 and 1845-1847), when he, already a free man himself, observed the fate of servant women in his  poems Naimychka (The Hireling, 1845), Malen'kii Mar’iani (To little Maryanne,  (1845) and others.

He continued to write and paint in exile. Here is one of a few works by Shevchenko depicting Kazakh girls: 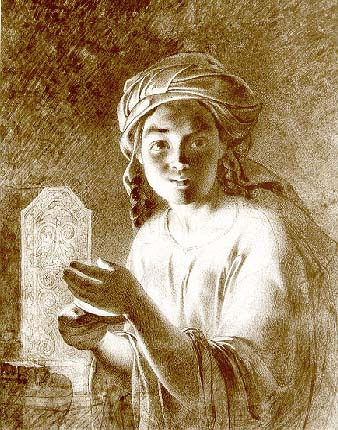 One of the best- loved  of Shevchenko’s poems in Ukraine is his Son (The Dream), written after he returned from exile.  It describes the dream of a serf-woman in summer:

She reaped the wheat in serfdom’s labour;
Worn–out;   for the rest she did not come
To the sheaf - she made her way there
To feed Ivan, her little son….

She falls asleep, and in her dream she can see:

She saw, in dreams, her son Ivan
Grown up, of handsome, manly carriage,
Wealthy, betrothed, and now his marriage
To a free bride – he a free man,
No more the lord’s, they lived in freedom…
(Translated by Vera Rich)

This poem was dedicated to the  bright young Ukrainian writer Marko Vovchok, whose debut (the publication of  Narodni opovidannia  [ ‘Folk stories’]  in 1858; we hold the second edition from 1861; 12590.g.2) Shevchenko greeted with great enthusiasm. 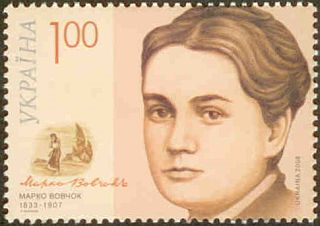 Portrait of Marko Vovchok  (stamp of Ukraine) From Wikimedia Commons

The poem was written in 1858. The Emancipation reform  in the Russian empire happened a few years later.  Shevchenko did not live to see it.  On 17 February 1859 he dedicated another poem “To Marko Vovchok” in which he called her “My light, / You are my holy star in truth / You are for me the strength of youth.” Marko Vovchok lived a long life and became one of the classic writers of Ukrainian literature, many of whom are women. They all acknowledge Shevchenko’s poetical skills and his profound humanity which makes him a poet so much loved by every new generation in Ukraine.