The Serbian Typhus Epidemic - 100 years on

The devastation caused by the influenza pandemic at the end of World War One is well known; what is less well known is that many parts of Europe were badly affected by diseases throughout the war. One of the first of these was an epidemic of typhus and relapsing fever which started in Serbia at the end of 1914 and killed upwards of 150,000 people in a population of around four and a half million.  Both diseases shared similar symptoms – a high temperature, rashes and constant itching - and were spread by the same means – lice. They were also highly infectious and often occurred together. While the exact start date of the epidemic was disputed, sources agreed that it ended in June 1915. Even in this short time the epidemic was still devastating in a small country where the diseases spread rapidly. 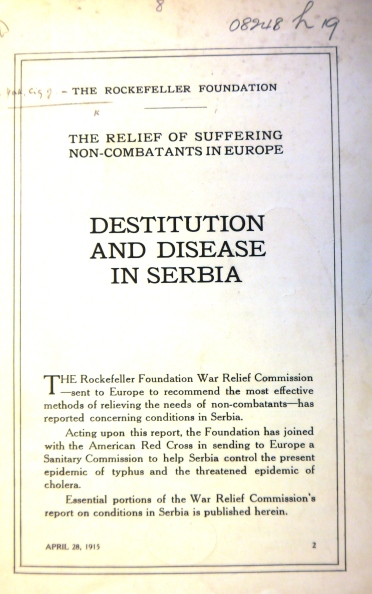 The documents listed below are the key contemporaneous accounts of this epidemic. The differences in emphasis are dramatic, ranging from the appeal for assistance from the Rockefeller Foundation to Minkine’s more clinical account of the epidemic, and from the self-promotion of the Hunter and Strong reports to the critical soul-searching analysis by Serbian doctors in 1925, edited by Stanojević. 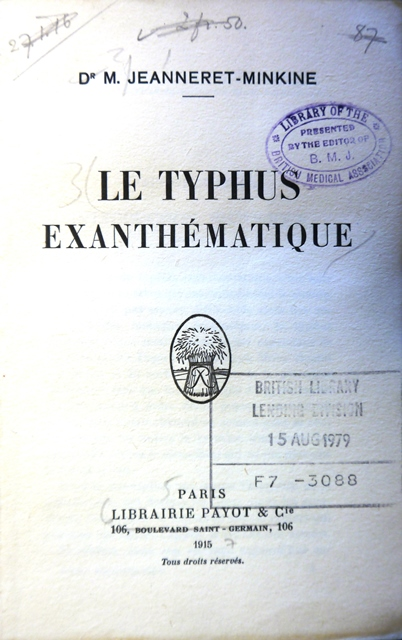 In contrast to the first of these accounts to be published (that of the Rockefeller Foundation) where the Serbs were portrayed as helpless victims, by the time of the Stanojević analysis there was an active desire not just to understand the causes of the epidemic, but to prevent any future recurrences. The Hunter and Strong reports, published immediately after the war, emphasised the actions taken by their respective groups to relieve the epidemic, but without clear advice about what ‘weather-proofing’ was needed for Serbia to remain disease-free. 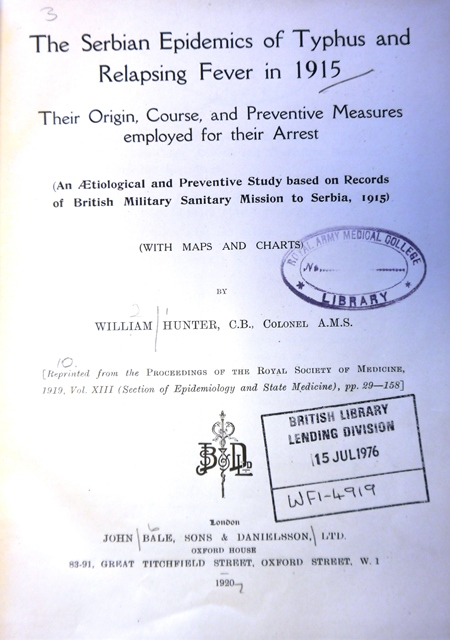 The fact that the epidemic took place during a war, which made ascertaining the facts especially difficult, explained some of the differences between the accounts. These sources reveal why typhus was such a feared disease even after it was found to be preventable; in 1909 it was discovered that the disease was caused by body lice, although the cure was not known until after the war. 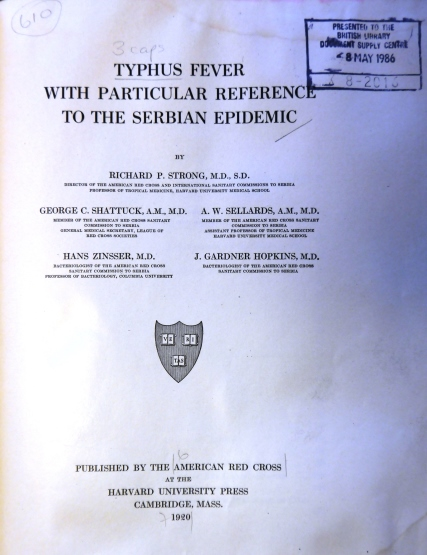 In a parallel with the recent Ebola crisis, the international community was scared that the disease would spread. They realised that an epidemic was not just the concern of one country, but had global implications. A number of countries, particularly in Europe, implemented new and stricter quarantine laws in 1915, specifically citing the risk posed by Serbia. 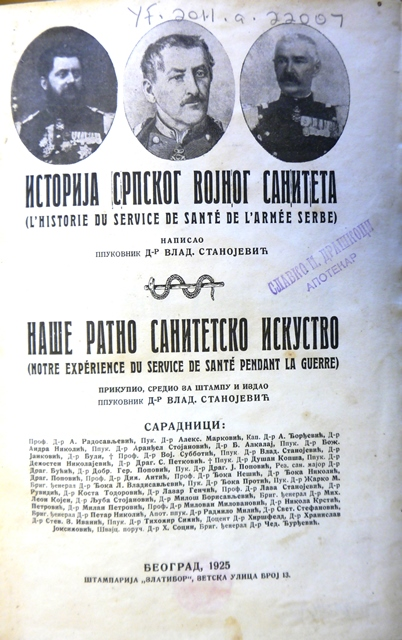 Despite the dramatic and tragic losses, the typhus and relapsing fever epidemic taught some useful lessons. The epidemic was ended very quickly by the standards of the time. It was a good example of the international community coming together in a common cause, and it demonstrated a key principle in terms of epidemic management, namely that prevention was cheaper than relying on a cure that had not been invented.

The Rockefeller Foundation, The relief of suffering non-combatants in Europe: Destitution and disease in Serbia (New York, 1915).  08248.h.19.

Thanks for this. Did you know that a Scottish lady doctor, Dr Elisabeth Macbean Ross died in this epidemic, after volunteering there? I first got to know about her because she also worked in the Zagros Mountains in Persia with the Bakhtiari tribe (see my article http://www.tandfonline.com/doi/abs/10.1080/03068374.2011.539322#.VREzWeasWSo
and my soas site http://www.soas.ac.uk/gallery/bakhtiari-kuch/eet/ross/ and a blog posting : http://www.carolinemawer.com/whats-new/bakhtiari-old/ladies-in-bakhtiariland-and-the-constitutional-revolution/) but I also know that she is commemorated - I think annually in Serbia: http://www.kragujevac.rs/Commemoration_in_honor_of_dr_Elizabeth_Ross-125-2-4078
In Persia, she is reported to be one of the few Edwardian ladies to have had her corsets removed by brigands - because they wanted the whalebones!
Please dont hesitate to contact me if you want to know more. I dont know what you have in BL about her - my source were elsewhere. Maybe you have her book?
Best wishes
Carolline Mawer
caroline.mawer@gmail.com

Thank you very much for your lovely comment and the information about Dr Elisabeth Macbean Ross. Your interest and comment are appreciated very much.

Thank you for your post on this tragic event in history. It is an epic story that is all but forgotten.

I am trying to write a comprehensive account, but my ability to access serbian documents is limited. Is the serbian account above translated into english anywhere to your knowledge?

Are there any photos inside?