One of the “myths” of the 1917 October Revolution and Bolshevik takeover of power is that it was the turning point for women’s equality in Russia. In fact, women gained some rights, such as the right to vote and to run for public office, following the February 1917 Revolution. The February Revolution actually began on International Women’s Day, when masses of female workers and soldiers’ wives took to the streets in Petrograd.

The campaign for women’s suffrage and equality in Russia, and indeed across much of the world, was gathering momentum by the early 20th century. In Russia this fight is documented in the various women’s journals that emerged during this period, particularly after the 1905 Revolution, from the “bourgeois” to the working class.

Continuing with the European Studies blog’s women theme this week in honour of last Sunday’s International Women’s Day, this post highlights a few of the journals we hold here at the British Library and the various women’s groups and parties they were affiliated with. 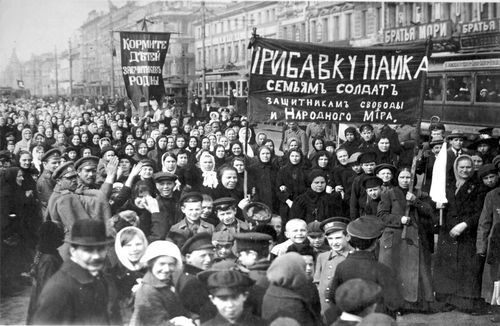 Photo of Russian women demonstrating in February 1917  (From Wikimedia Commons )

Inspired by her work with the poor, children and prostitutes, in 1904 Dr Mariia Pokrovskaia  founded a journal, Zhenskii vestnik (The Women’s Messenger), to highlight the problem of women’s inequality. Zhenskii vestnik was the first Russian journal dedicated exclusively to the woman question and it ran until 1917. True to her medical background, the journal even contained a health section. Although Zhenskii vestnik was still deemed bourgeois by Bolshevik activists such as Alexandra Kollontai, Pokrovskaia sought to bridge the gap between educated and working class women.

One of Zhenskii vestnik’s main rivals was the journal Soiuz zhenshchin (Union of Women). Established by the Russian Union for Women’s Equality, the largest and arguably most militant feminist group operating in 1905, Soiuz Zhenshchin ran from 1907 until 1909 and was under the editorship of feminist journalist Mariia Chekhova. The journal included a wide range of articles, stories and information, from news of women’s movements abroad to a translation of Oscar Wilde’s short story The Nightingale and the Rose. Among its contributors was the journalist and politician Ariadna Tyrkova-Williams, introduced in my last blog post as the school friend of Lenin’s wife Nadezhda Krupskaia.

After Soiuz Zhenshchin collapsed in 1909, Zhenskii vestnik once again became the only “feminist” journal. A number of journals with a feminist slant did however emerge in the years leading up to the 1917 revolutions, the most successful of these being Zhenskoe delo (The Women’s Cause). These journals tended to include the odd article addressing women’s issues but took the form of more traditional women’s magazines. 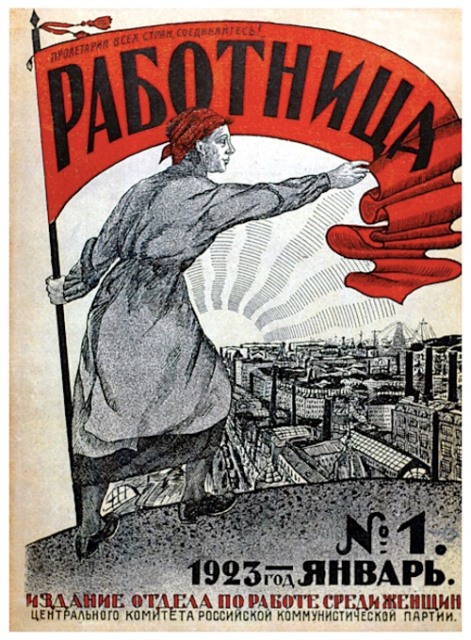 As briefly mentioned above, Bolshevik revolutionaries were critical of what they saw as the “bourgeois” women’s groups which were mainly run by women from privileged backgrounds. On Women’s Day 1914, Lenin and a group of Bolshevik women published the first Russian socialist women’s journal, Rabotnitsa (The Woman Worker). However as historian Rochelle Goldberg Ruthchild points out, although it was addressed to women the journal “took pains to deny any links to feminism” (An Improper Profession; p. 183).  Rabotnitsa was revived in 1917 and became one of the main Bolshevik publications.