Every Day is Fools’ Day

Today being the first of April someone is probably going to try and make a fool of you, whether by making you act foolishly (trying to pick up the coin glued to the floor, bending to tie your perfectly-fastened shoelace) or by playing on your credulity with spoof news stories like the BBC’s famous spaghetti harvest – or the BL’s own unicorn cookbook.

A successful April Fool’s Day trick makes both joker and victims laugh; the victims are only temporarily fooled and appreciate the joker’s skill in catching them out. But in the late mediaeval literary genre of ‘Narrenliteratur’ (fool literature) the authors depict folly not as a brief moment but as a part of the human condition, identifying many different kinds of fools and folly in contemporary society.

One of the best known works of this kind, and an early modern European bestseller, is  Das Narrenschiff (‘The Ship of Fools’) by the German humanist Sebastian Brant. Originally published in Basel in 1494, by 1500 it had already gone through 13 German editions. A Latin translation formed the basis for French, Dutch and English editions in the late 15th and early 16th centuries. 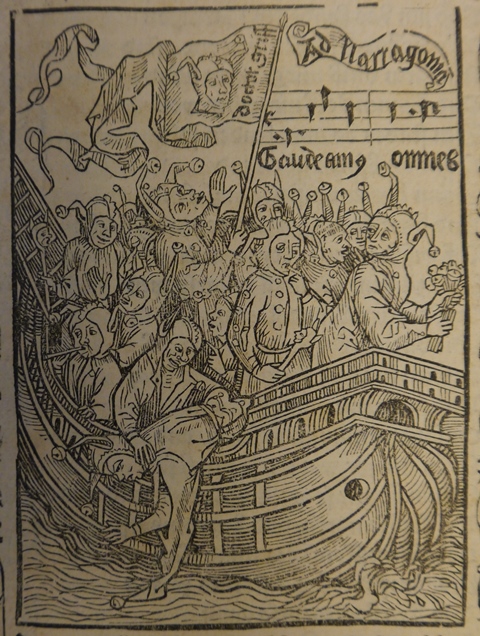 Brant describes various kinds of fools who fill the eponymous ship on its journey to ‘Narragonia’, a land of fools. First among them is the pseudo-scholar who surrounds himself with books that he can neither read nor understand. His picture is one of the most famous in the book, and very popular with bibliographers (one hopes with a degree of self-deprecation!). Others include slavish followers of fashion, those consumed by self-love or pride, believers in astrology, and those who eat, drink or pursue sports and games to excess. 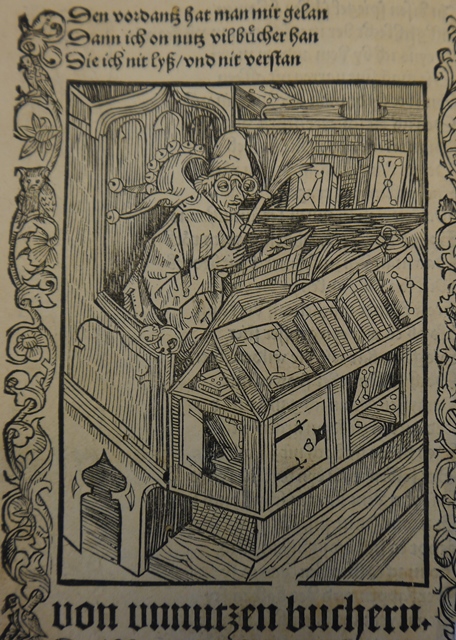 The book collector with his useless library

Some of the book’s instances of folly are still the subject of complaints (just or unjust) today: students who should be working hard but who spend their time in dissolute pursuits, parents who set their children an bad example, those who waste time pursuing long and complex legal cases. I always think that the fool who takes all the world’s troubles on his shoulders and falls under the weight [below] is a salutary example for todays’s overstretched workers. 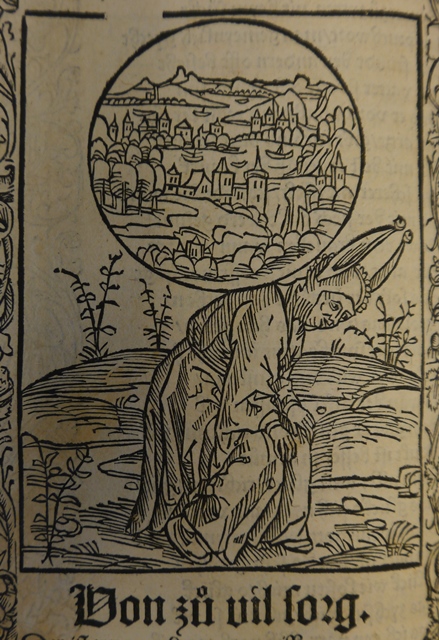 Other examples are more firmly of Brant’s own time. He castigates those who mock God, fail to observe holy days or bring their hounds and falcons to church. He classes all non-Christians (and Christian ‘heretics’) as fools. And one of his earliest examples of a fool is the parent or teacher who spares the rod and spoils the child; the woodcut shows his children turning on each other as he sits blindly by: If Brant’s book has a moral and didactic purpose, the pill is sweetened by his lively rhymes in ‘knittelvers’ form and the woodcut illustrations. Many readers no doubt simply enjoyed the book as an entertainment and, rather than seeing themselves in Brant’s ‘mirror of fools’  and mending their ways, identified the follies of their neighbours and felt smug. 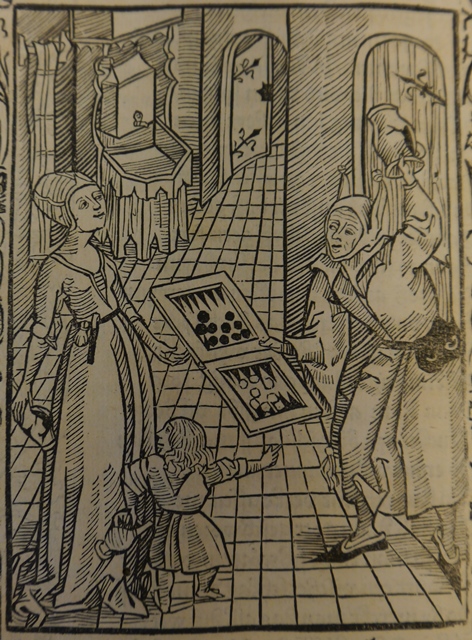 The foolish parents who set their child a bad example

But like the successful April Fool’s joke, Brant’s examples can make us wise by making us appreciate our own gullibility. As he states his introduction, “Wer sich für eyn narren acht / Der ist bald zů eym wisen gemacht” (“He who recognises himself as a fool will soon become a wise man”).

So  if anyone catches you out today, just accept that it’s made you a little bit wiser.