Grimms’ tales in Translation (and in the British Library)

Perhaps one of the British Museum Library’s worst 19th-century acquisition decisions was not to  buy the first edition of Kinder- und Hausmärchen by Jacob and Wilhelm Grimm when it appeared in 1812. Probably the title put the selectors off, fooling them into thinking that these ‘Children’s and Household Tales’ were intended purely as a domestic entertainment, a ‘mere’ children’s book, a genre we don’t generally buy from overseas. Even the second edition, the earliest that we hold, was not acquired on first publication in 1819 but later in the century; the first volume has a brief manuscript  dedication from Wilhelm Grimm to a previous owner.

While the Grimms did not necessarily want to exclude children from their audience, their primary goal was to collect and record German folklore for an academic readership, and both the first and second editions include a volume of scholarly notes on the stories and their origins. 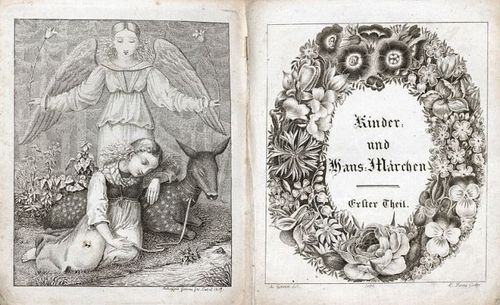 However, as more and more editions were published, the tales were made more child- or family-friendly. Already in this second edition Wilhelm Grimm had started the process of sanitising and Christianising the stories. The frontispiece to the first volume hints at this process with its rather sentimental illustration of the story ‘Brüderchen und Schwesterchen’, which shows an angel watching over the eponymous brother (transformed into a deer) and sister as they sleep. (Like the portrait in the second volume of Dorothea Viehmann, the tailor’s wife named by the Grimms as a source of a number of stories, the picture is by a third Grimm brother, Ludwig.) 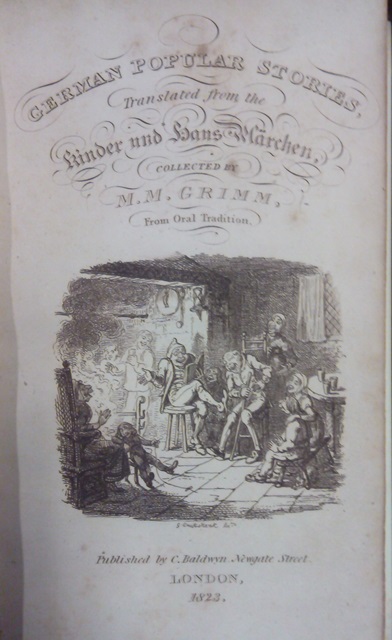 The Grimms’ tales were soon translated into many languages, and the British Library’s holdings of the tales are overwhelmingly English translations published in Britain, the majority aimed at a young audience. These range from more or less direct translations, through re-tellings as picture books or ‘easy readers’, to reimaginings or ‘subversions’ of the tales. Some in this last category are in fact aimed at adults, like the stories in Angela Carter’s The Bloody Chamber. And plenty of works of modern German literature which we hold also play on the Grimms’ stories for an adult audience, for example Elfriede Jelinek’s Prinzessindramen and Günter Grass’s Der Butt – ‘translations’ of the stories in a different sense.

Another form of translation –in the sense of interpreting the stories in a different medium – is illustration. Again, most of our illustrated versions of the stories are English translations for children, featuring a roll-call of fine artists including George Cruickshank (the Grimms’ first English illustrator), Walter Crane, Arthur Rackham, Mervyn Peake and Maurice Sendak. 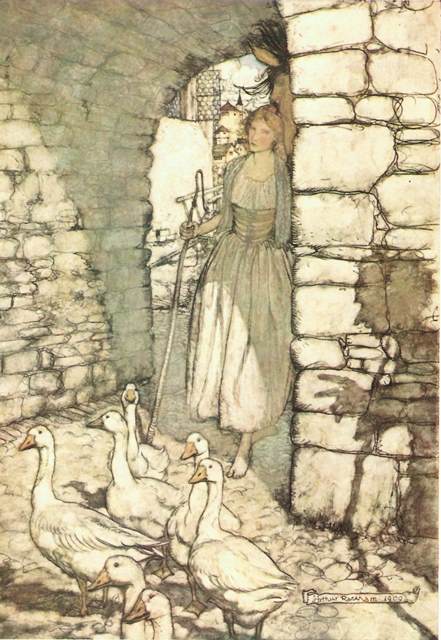 To return to actual translations, despite our general policy of not buying foreign children’s literature, a search in our catalogue reveals children’s editions of the Grimms’ tales in many languages, acquired in various ways. Among European languages we have versions in Czech, Dutch, French, Russian, Spanish and Ukrainian, as well as the auxiliary languages Esperanto and (more unusually) Volapük, all testifying to the international influence and reach of a collection intended to highlight and preserve a national tradition.

This piece is based on the author’s contribution to a lunchtime talk given in the John Ritblat - Treasures of the British Library Gallery on 13 May, the second in a series organised with the British Academy as part of their Literature Week 2015 and to coincide with European Literature Night. The Library’s copy of the 1819 Kinder- und Hausmärchen is currently on display in the gallery with items related to the other talks. The final talk, on African Folklore and the Tales of Anansi, will take place on Friday 15 May.