Scholarship will always be indebted to George II, one of Britain’s least scholarly kings. In 1757 George boosted the reputation of the fledgling British Museum by donating some of the most precious books owned by his predecessors – 2,000 manuscripts and some 9,000 printed books. This donation, known as the Old Royal Library, has since passed to the British Library, where the manuscript portion is now known as the Royal Collection.

Among these manuscripts is an inconspicuous paper volume, written in a beautiful  late 16th-century Secretary hand. It contains the (then) only known, yet unfinished copy of the elaborately titled A Relation of the State of Polonia and the Provinces United with that Crowne, Anno 1598, familiar to historians as the most detailed English account of the Polish-Lithuanian Commonwealth. 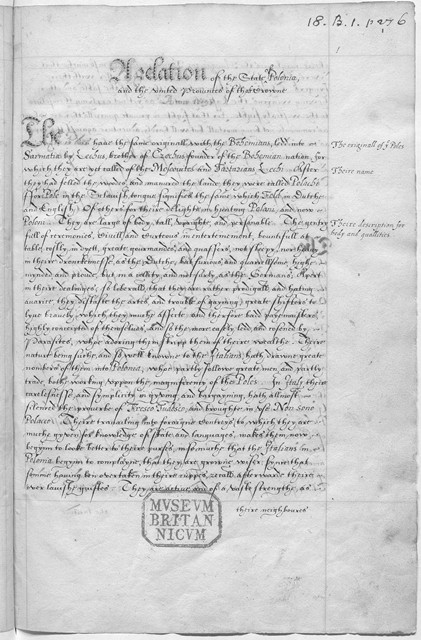 The title-page of A Relation of the State of Polonia and the Provinces United with that Crowne, British Library Royal MS 18 B. i.

Because 16th-century Poland-Lithuania stretched into what is now Ukraine, Belarus, Russia, Moldova, Romania, Slovakia, Latvia, and Estonia, A Relation of the State of Polonia has become an important source for many Central and Eastern European historians. But  the work  also marks a milestone in the history of English travel writing: it is a highly sophisticated account of Poland-Lithuania’s politics, law, administration, culture, and diplomatic relations, together with risk assessment – not unlike the country profiles contained in the CIA’s World Factbook. 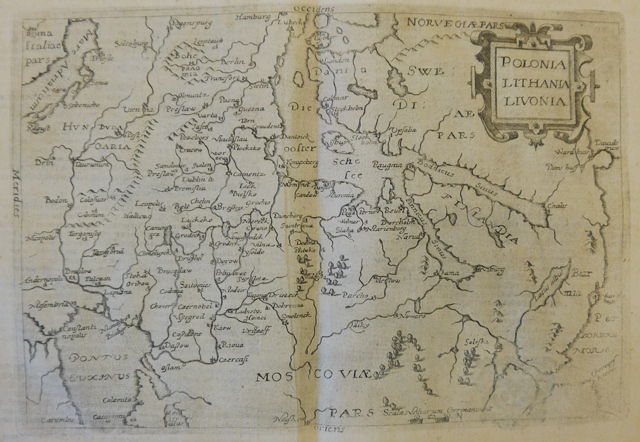 Such a wealth of knowledge called for a well-connected author, and scholars were quick to suggest George Carew, a career diplomat who was sent in 1598 to negotiate with Poland’s Sigismund III Vasa. Others put forward the Scot William Bruce (c.1560–after 1613), a professor of the civil law at the Zamojski Academy. Whereas Bruce’s authorship can be firmly excluded on the grounds of language and religion, Carew’s involvement is largely speculative.

In 2013 I decided to re-examine  the British Library manuscript, in the hope of finding evidence – any evidence – that would point towards the work’s author. It turned out that the text and the notes in the margin were written at different times: the events mentioned took place in 1598, but the marginal notes were added between 1602 and 1603. I also discovered that the paper came from Poland: I traced the watermark to the Olkusz paper-mill near Cracow, and it appears in two books printed in 1596 and 1597 by the court printer Jan Januszowski. With these new clues, I started to look for an Englishman who was in Poland between spring and autumn 1598, passed through Cracow, and had reason to update the text between 1602 and 1603.

That’s when I found John Peyton (1579–1635), son of Sir John Peyton (1544–1630), Lieutenant of the Tower. Peyton was in Cracow in the spring of 1598, and wrote a letter to his father detailing troop movements (I have since been able to prove that the younger Peyton was a spy in the employ of Queen Elizabeth’s spymaster Robert Cecil). Peyton’s trail led to a manuscript (Kk v. 2) in Cambridge University Library. This gathers Peyton’s travel accounts, including one on Bohemia with an eerily familiar title: A Relation of Bohemia and the United Provinces of That Crowne. Anno 1598. What’s more, the collection contains the copy of a letter, sent to King James’s secretary, in which Peyton explains that his ‘discourse of Polonia’ is missing because he had ‘presented [it] to the king at his Majestyes first comming to London’ (fol. 6r.). I realised that the British Library manuscript must have been presented to James I during his coronation in the summer of 1603.

The discovery of Peyton’s authorship of this important text meant that the existing entry in the Oxford Dictionary of National Biography  needed radical expanding: at this time, John Peyton only figured as a paragraph in the entry for his more prominent father. The Dictionary’s editors responded enthusiastically to this find, and invited me to prepare a new, standalone entry for the younger John Peyton,  for publication in one of the ODNB’s regular online updates.

I started looking for other copies of the text, trawling through countless 18th- and 19th-century auction catalogues. The quest proved rewarding: a copy entitled A Relation of the Kingdom of Polonia, and the United Provinces of the Crowne, by Sir John Peyton changed hands at least five times between 1751 and 1898, when the trail went cold after a Sotheby’s action. Anthony Payne,  a former Director of Bernard Quaritch booksellers, located an annotated copy of the 1898 catalogue, which revealed that the book had been acquired by one of the Munich-based Rosenthal brothers – I later discovered that the buyer was Jacques Rosenthal. The ‘lost’ manuscript has since been acquired from an anonymous seller from Prague by St Andrews University Library  (I discuss this new manuscript, ms 38902, in the journal The Library).

But why would Peyton go through the expense of producing a lavishly written and gilded copy, which is then left unfinished? I found out that Peyton was among those waiting at Elizabeth’s deathbed in March 1603, on his father’s orders. When the queen died, Peyton raced to Edinburgh to break the news to James VI. He arrived second, but the king bestowed estates on Peyton and knighted him, publicly referring to Peyton as his ‘first knight’. The British Library copy was a well-timed coronation gift for James, its completion was interrupted by Elizabeth’s death. But the marginal notes and the change in the title from ‘Kingdom’ to ‘State’ (as an afterthought as is visible in the image), reveal that Peyton’s marginal notes furnished James with details about the then 200-year-old union of Poland and Lithuania – the only existing parliamentary union at the time. Unsurprisingly, James kept bringing up this type of union between England and Scotland over the next few years, and the Polish-Lithuanian Commonwealth was frequently discussed in British constitutional debates.

This post is based on the author’s research on medieval and early modern travel writing and on his identification of John Peyton’s authorship, first published as ‘John Peyton’s A Relation of the State of Polonia and the Accession of King James I, 1598–1603’ in the English Historical Review.