With the Eurovision Song Contest celebrating its 60th anniversary, and still regularly attracting around 200 million viewers, this year presents a great opportunity to look beyond the glitz of modern Eurovision and consider the changes in European culture, society and politics which it reflects.

We must thank the Italian members of the European Broadcasting Union  for the idea of the contest, originally conceived to help promote peace and harmony in a Europe still recovering from the Second World War. Since that first contest in 1956 in Lugano, Switzerland between seven participating countries, it has expanded to include as many as 43 entries in the record year of 2008;  now qualifying rounds are required before the grand finals. 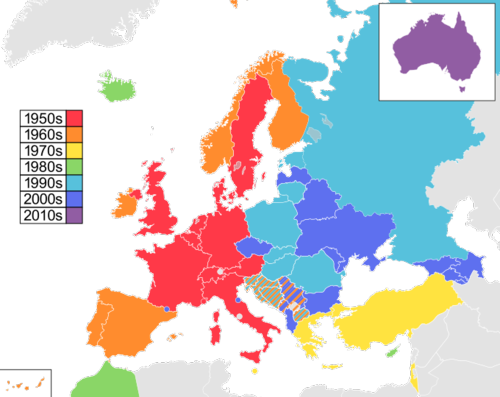 How amazed those Italian broadcasters, whose stated mission was to “stimulate the output of original high- quality songs in the field of popular music by encouraging competition between authors and composers through the international comparison of their works,” would be to see the power of YouTube, enabling viewers to compare in seconds the first ever winner, Switzerland’s Lys Assia singing Refrain, with Conchita Wurst’s winning Rise like a Phoenix for Austria in 2014.

As a child of mixed heritage growing up in a small, monocultural English city, I loved the reporting of votes from the national juries even more than the songs – seeing the glamorous multilingual presenters, usually framed by an iconic national landmark first gave me a sense that I fitted in somewhere as a European and really inspired me to study foreign languages. Have you ever wondered what goes on behind the closed doors of those national juries? Wonder no more! Via the EU Screen portal you can now see the terribly solemn 1976 Belgian jury deliberating at length over a nice cup of tea and contributing to one of the highest scores ever for a winning entry – the UK’s Brotherhood of Man’s inimitable Save Your Kisses for Me.

Everyone will have their favourite Eurovision moments and associations, but there is far more to this event than sequins, folk-costumes and cheesy songs. On one level, Eurovision can be viewed as consolidating nationalistic stereotypes, but by encouraging viewers to encounter Europe in their living rooms it can also be seen as contributing to a sense of a common European identity. It is family viewing for today’s European family in all its diversity – gay and straight, old and young – all sharing the same experience but bringing their own readings to it. This European identity is then projected further afield with many enthusiastic viewers around the world – the contest is so popular in Australia that in this  anniversary year Australia’s Guy Sebastian will be a guest participant. Winners of the 2015 second semi-final, with a range of national flags on stage and in the audience (photo from  EUROVISION/EBU, © Andres Putting (EBU))

Through the prism of Eurovision we can also see the changing shape of Europe. In the 1990s there was a rapid expansion of participants from Central and Eastern Europe and the former Soviet Union.  The socialist countries had previously held separate song contests, with only Yugoslavia breaking the mould by joining Eurovision in 1961. Viewers behind the Iron Curtain watched the annual Sopot Music Festival from Poland or its short-lived offshoot, the Intervision Song Contest. The Sopot Festival was the brainchild of Władysław Szpilman, the Polish Jewish musician immortalised in Roman Polanski’s film The Pianist, bringing singers from around the world to perform, initially at the Gdańsk shipyards, then moving along the coast to Sopot. Intervision/Sopot also attracted huge audiences not least because guest artistes such as Boney M were invited to play in the intervals.

By the 1990s participating in Eurovision was often a way for the new entrants to assert sovereignty, contribute to nation-building and project a particular national image around the world. Take for example Ukraine’s 2004 winning entry Wild Dances, performed by Ruslana  and featuring a version of the dances, costumes and rituals of the Hutsul people from western Ukraine, which then came to represent universal Ukrainian folk traditions for international viewers.

Eurovision also brings its viewers face to face with key political issues facing contemporary Europe. One can learn much about regional and cultural alliances by observing voting patterns, or about  linguistic politics within Europe, such as the rapid rise of English as a lingua franca, demonstrated by the fact that so many entries are now sung in English in order to reach the widest possible audience.

But perhaps one of the key reasons for Eurovision’s enduring success is the way in which it has come to symbolise diversity and tolerance, far exceeding the original hopes of the EBU. It can be seen to represent a certain stability and unity in the face of an increasingly fragmented Europe.  To quote Conchita Wurst, who was welcomed in November 2014 by UN Secretary General  Ban Ki-Moon as an ambassador for human rights, “The Eurovision Song Contest is about love and respect for different languages, cultures and people, who in the end have more in common than differences” 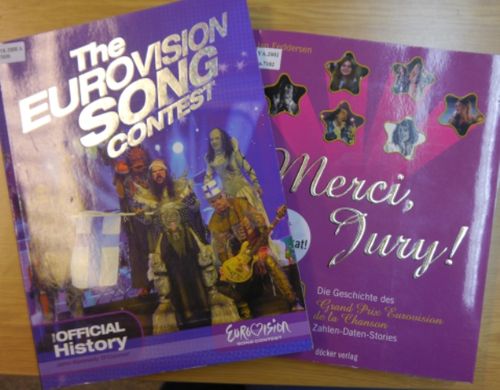 The British Library catalogue lists a huge range of resources relating to the Eurovision song contest – from books and academic articles, to audio and video recordings and archived websites. Some appear in unexpected places such as the article “ How does Europe Make Its Mind Up? Connections, cliques, and compatibility between countries in the Eurovision Song Contest” published in the scientific publisher Elsevier’s serial Physica A. (Vol. 360, No. 2, 2006, 576-598; British Library 6475.010000). However, not every author feels the love which Conchita Wurst refers to, as shown by S. Coleman’s article “ Why is the Eurovision Song Contest Ridiculous? Exploring a Spectacle of Embarrassment, Irony and Identity” in Popular communication (Vol 6, No. 3, 2008, 127-140; 6550.310000)

But whether they come to love or to mock, millions across the continent will be  sitting down this Saturday evening to watch the contest once again.

A song for Europe: popular music and politics in the Eurovision Song Contest / edited by Ivan Rakoff and Robert Deam Tobin (Aldershot, 2007) YC.2007.a.15111