Basque, or Euskera, as the Basques call it, is a pre-Indo-European language now spoken in four provinces of northern Spain and three in France, on either side of the Western Pyrenees. It once extended over a much wider area, but how much wider is a matter of conjecture, as indeed is the prehistory of the language and people. In spite of perceived similarities and lexical coincidences between Basque and an extraordinary number of languages, living and dead, from across the world, only surviving fragments of Aquitanian, a language once spoken in South-Western Gaul, have been shown to have meaningful coincidences with Basque. Aquitanian can thus reasonably be regarded as an ancestor or close relative. Today Basque is an isolate, and the only surviving pre-Indo-European language in Western Europe.

Basque is a difficult language for speakers of other Western European languages. For example, the relationship of subject and object is quite different from what we are familiar with in English, or Spanish, and from what we may recall from Latin with its nominative (subject) and accusative (object) cases. Wikipedia  tells us that:

The auxiliary verb accompanies most main verbs, agrees not only with the subject, but with any direct object and the indirect object present. Among European languages, this polypersonal agreement is only found in Basque, some languages of the Caucasus, and Hungarian (all non-Indo-European).

So in Basque we have the sentence ‘nire aitak Mireni liburu eman zion’ (‘my father gave the book to Miren’) where the auxiliary (zion) recapitulates the relationship between ergative, direct and indirect objects. 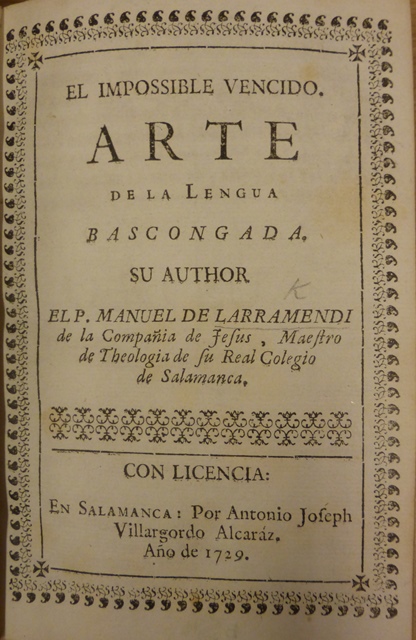 The present-day Basque Country, or Euskal Herria, straddles France and Spain and within Spain it is divided between the Comunidad Autónoma del País Vasco and the Comunidad Foral de Navarra.  The three French provinces (Labourd, Basse Navarre and Soule), together with Béarn, make up the department of the Pyrénées Atlantiques.  The Comunidad Autónoma del País Vasco comprises the three provinces of Alava, Gipuzkoa and Bizkaia. In Spain the language is spoken most widely in Gipuzkoa, Bizkaia and the northern parts of Navarra. The number of Basque speakers in France is declining and the majority of speakers are elderly. However, usage among young people has increased according to figures from 2011. 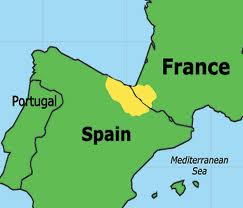 The Basque Country is also divided linguistically: according to Louis-Lucien Bonaparte’s dialect map (London, 1869; Maps 18649.(4.)), the language can be classified into eight dialects. The situation in the late 20th century has been described by Koldo Zuazo as consisting of five dialects.
Since the late 1960s concerted efforts have been made to create a standardized form of Basque, known as batua (= unified; < bat = one).

In the aftermath of the Spanish Civil War, the use of Basque was forbidden in education and public life as part of General Franco’s quest to impose national unity. At its most harsh, his regime forbade even the speaking of Basque in public. By the late 1960s the situation had eased somewhat and private schools, ikastolak, which had been functioning in secret, were now tolerated. The Spanish Constitution of 1978 gave Basque co-official status in the Comunidad Autónoma del País Vasco and in some areas of Navarra. The introduction of the teaching of Basque in state schools by the autonomous Basque Government has saved the language from what would almost certainly have been total extinction. Basque imaginative literature has re-emerged and the works of prominent writers such as Bernardo Atxaga and Kirmen Uribe  have been widely translated.

The most recent survey of the state of the language (V Encuesta Sociolingúística, 2011) has permitted broadly positive conclusions. Nearly 60% of people in the Comunidad Autónoma del P.V. now have some knowledge of Basque, an increase of 14.5% over the past 30 years. The percentage of fairly competent speakers now stands at 36.4% of the population, a roughly similar increase. Strangely, one worrying aspect of the survey is that the use of Basque in the home has dropped very slightly.  However, the broad conclusion of the survey is that the future of Basque – in Spain – lies with the Basques themselves.