The War Poet who wasn’t: Simon Gregorčič and the Soča Front

May 24th marks the centenary of Italy’s entry into the Great War. In previous blog entries related to this event, I have focussed on the Isonzo/Soča Front, which bore the brunt of the first Italian military operations.  For today’s entry, I return there again, to write about a character who played a significant role in that action, but who had died almost a decade before war broke out. 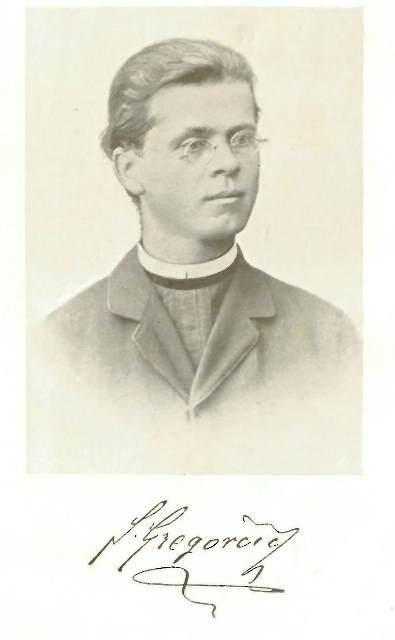 Simon Gregorčič is one of Slovenia’s best-loved poets, and a significant figure in the 19th-century struggle for national rights. He was born in 1844 in the village of Vrsno, nestling beneath Mount Krn very close to the then Austro-Italian border, and the local landscape and lifestyle imprinted itself profoundly on his work. His family were peasant farmers who raised sheep in the pastures of the Soča valley, but young Simon had been born at a time of fast-rising literacy. He went to the grammar school in the regional capital Görz/Gorica (now Gorizia, in Italy), and then studied to become a priest; yet, apart from a brief period at the University of Vienna, he never really went far from his beloved Valley.

He worked as a chaplain in Kobarid, not far from his birthplace, where he had a formative love affair with a young teacher and promoted the cultural life of the little town. During subsequent appointments, Gregorčič began to publish poetry, each of his four books called “Poezije”, with its number. For these, which he promoted in public readings, he became a local celebrity in his own lifetime. His style was profoundly musical, full of feeling and even sensuality – for this Catholic priest had quite a number of intense relationships with women.  He wrote about social injustice, Slovene rights, the landscape that surrounded him. Among his best-known poems – and one of the few which have been translated into English - was  ‘Ash Wednesday Eve’, in which he warned the rich and proud among his congregation of their mortality while inviting the poor and dispossessed, including his relatives, to take their place in the Church and celebrate “Resurrection morn.” Its theme may sound gloomy and didactic, but the poem is so beautifully written that it evokes the twilight falling over his native Valley, its little churches lit up amid the dark peaks, spilling smells of incense into the night air as the people hurry in from near and far.

Gregorčič’s most famous poem of all is ‘Soči’ – ‘To the Soča’- describing the river’s progress from its mountain source to the plains of Trieste. At the beginning the turquoise water (it really is!) is fast and vigorous, “like the walk of the highland girls”, and its refrain runs, “You are splendid, daughter of the heights!” (“Krasnà si, hči planin!”). But when the river reaches the exposed plain it grows sluggish, sensing its vulnerability. Gregorčič foresaw a day when it would be filled with blood, surrounded by a “hail of lead”, and would need to burst its own banks to “draw the foreigners ravenous for lands to the bottom of your foaming waves.”

Simon Gregorčič suffered lifelong ill-health (probably tuberculosis) and died in Gorizia in 1906. His funeral procession from the city to his grave in the village Smast was a huge public event. Nine years later, Gorizia, along with Trieste and the whole Soča Valley, would be among Italy’s chief targets in its attack on the Austrian Empire. Simon Gregorčič  was summoned from the grave to spur on the Slovene troops in defence of their homeland: he was shown on postcards greeting the Emperors Franz Joseph or Karl when they visited the battle-torn region, or looking protectively down upon the river with the military commanders Archduke Eugen or Svetozar Boroević von Bojna alongside him in the sky (pictures above). Sadly prophetic, the words of ‘Soči’ featured widely, particularly the verse urging the river to drown the foreign invader. 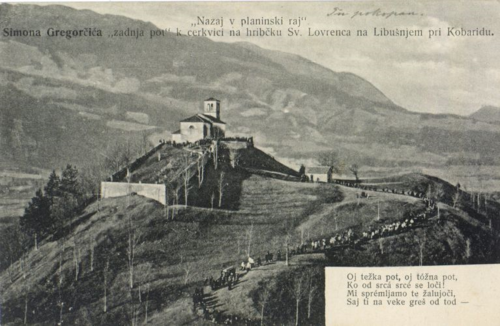 Austria’s one major victory in the awful stalemate was 1917’s infamous Caporetto (the Italian name for Kobarid). The town which lay so close to the poet’s heart was symbolically the site of a total rout of the Italian invaders. A bust of his friend, the composer Hraboslav Volarić, symbolically watched from a corner of the square.

They would, however, return victorious a year later, and Kobarid stayed under Italian rule until 1945. Volarić’s bust, along with other symbols of Slovene culture, was badly damaged by fascists, but in 1945 the town became part of Yugoslavia. The bust was replaced, and a full-length statue to Gregorčič  erected in 1959 on the opposite side of the main square.

Naturally, Simon Gregorčič’s birthplace is now a tourist site, and hikers can follow his route and inspiration through the villages and meadows around.

With particular thanks to Jože Šerbec of the Kobarid Museum.