A reluctantly modern voice from the 17th-century Russian storm: Archpriest Avvakum and the Life written by himself

Many have maintained the Life of the Archpriest Avvakum, written by himself [Zhitie Protopopa Avvakuma, im samym napisannoe] (ca. 1670) to be the first modern work in the history of Russian literature, for its harshness, bitterness and powerful imagery, which seem to have been handed down through unknown paths to later writers, such as Pushkin and Tolstoy:

And I came up, and she, poor soul, began to complain to me, saying, “How long, archpriest, are these sufferings to last?” And I said, “Markovna! Till our death”. And she, with a sigh, answered, “So be it, Petrovich. Let us be getting on our way”. 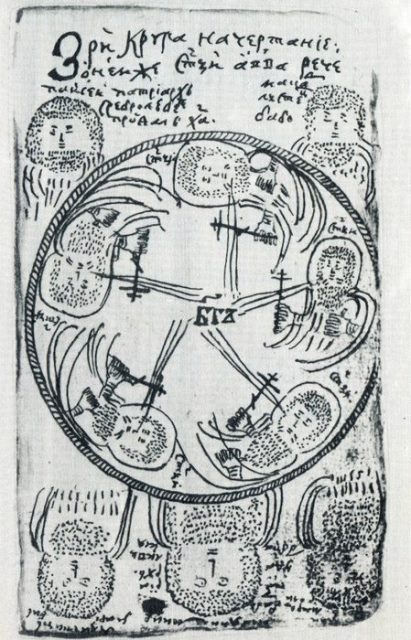 An autograph drawing by Avvakum, from f. 2 of  the 1675 Pustozerkii sbornik I.N. Zavoloko MS (Pushkinskii dom, St Petersburg). The British Library has a facsimile edition with a  transcription of the MS (Leningrad, 1975; shelfmark: 2702.a.59).

Avvakum Petrov lived and wrote in the second half of the 17th century, a politically and religiously stormy period, which opened with one of the deepest political crises in Russian history (the interregnum known as the ‘Time of Troubles’, 1598-1613) and culminated with probably its deepest religious one, the Great Russian Schism (1653). In this context, Avvakum was a representative of the first generation of religious dissidents who opposed the liturgical reforms of  Patriarch Nikon (1605-1681) in the Russian Orthodox Church, which created a split not only within the Church, but on a wider scale between large parts of the population and higher ecclesiastical hierarchies.

Though most probably an unconscious talent, or maybe just not capable of producing a finer product of art, due to a lack of higher education (as suggested by one scholar), Avvakum nonetheless produced an impressively ‘modern’ piece of literature.

His accomplishments in the literary use of the language are such that Dostoevsky numbers him alongside Pushkin as one of the Russian writers who cannot be properly translated into any European language. But while in Pushkin’s case this is due to his  exploring and exploiting the potential of the language to the full, Avvakum is a different kind of innovative writer. To contemporary eyes, one of his achievements was the ability to disentangle himself from the ‘anonymity’ of the Middle Ages, so that writing an autobiography would represent an extraordinary innovation itself. However, we may consider this to be its main innovative feature only if we weigh it with the rules and structure of the hagiographical genre, which Avvakum’s work superficially follows. The idea of a writer as an original author, and not only as a compiler or as the ‘hand of God’, was in fact already gaining acceptance at the end of the 17th century — for instance in the work of Symeon of Polotsk,  to name one of its best-known representatives.

Avvakum is instead still deeply mediaeval in his theoretical conception of writing. Although he produced an innovative literary work, he still pursued the old Russian aim of being dushepoleznoe [‘useful for the soul’]:

Avvakum, archpriest, was bidden by the monk Epiphanius, in that he was my ghostly father, to write down my life, that the word of God should not be given over to forgetfulness, and for this reason was I bidden by my ghostly father to write for the glory of Christ our God. Amen!

But to reach this aim he used a language shaped after his vernacular, with vivid and rough images and expressions, only at times interrupted by Church Slavonic, when the subject matter ‘required’ it:

And you, for God’s sake, who read and listen, do not despise our popular speech, for I love my native Russian tongue, I am not used to embellish my discourse with philosophical verses, because God does not listen to our refined words, but it’s our deeds that he wants … There is nothing much to ponder over:  our Lord does not look for words in Latin, Greek, Hebrew, or in any other language, but he wants Love and other virtues; for this reason, I shall not concern myself with rhetoric and I’m not ashamed of my Russian language. Despite the pride and love he shows for his ‘simple’ mother tongue, unprecedented in the history of Russian literature, the way he weaves together the unrefined, rough tones of the physical or everyday descriptions, and the stern or even prophetic voice of some more solemn passages, is not a ‘literarily conscious’ one. And yet, this is paradoxically one of the reasons why Avvakum’s Life is considered a remarkable literary achievement and a fascinating case study.

For nearly 200 years, the manuscript of Avvakum’s Life circulated privately in Old Believers  communities. It became more widely known only in 1861, when the Russian historian N.S. Tikhonravov published the first ever printed edition. 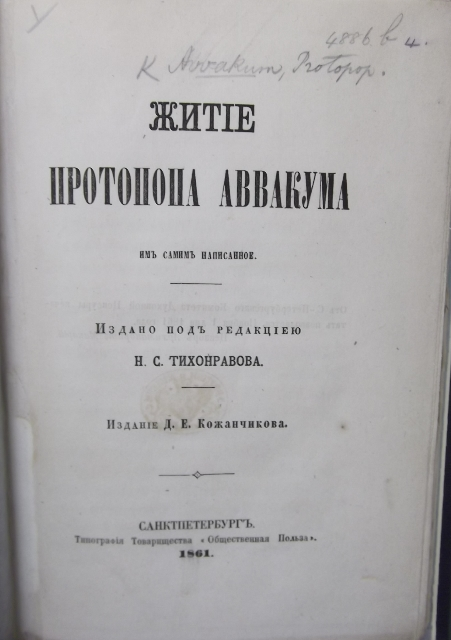 The Life of the Archpriest Avvakum by Himself, translated from the Seventeenth Century Russian by Jane Harrison and Hope Mirrlees, with a Preface by Prince D.S. Mirsky, London : The Hogarth Press, 1963. X.108/431.