Basque Books in the British Library

The first book in the Basque language was printed in Bordeaux as late as 1545.  It is a collection of poems by the vicar of St.-Jean-Pied-de-Port, Bernat Etxepare, entitled Linguae Vasconum Primitiae (‘First fruits of the Basque language’). Only one copy survives, in  the Bibliothèque national in Paris. Subsequent printing in Basque, both in France and Spain, was not extensive. So how it is that so many books in Basque are now in the British Library’s collections?

In fact books in a wide variety of languages, including Basque, were in the foundation collection of Sir Hans Sloane, who owned copies of three editions of Jean Etcheberri de Çiboure’s Noelac eta berce canta esperitual berriac (‘Carols and new spiritual songs’; Bordeaux, 1645; Bayonne, 1699; Bayonne: [1700?]; British Library 1064.a.30.(30), (2), (1) respectively). He also possessed the third edition of Etcheberri’s Eliçara erabiltceco liburua (‘A book to carry to Church’). 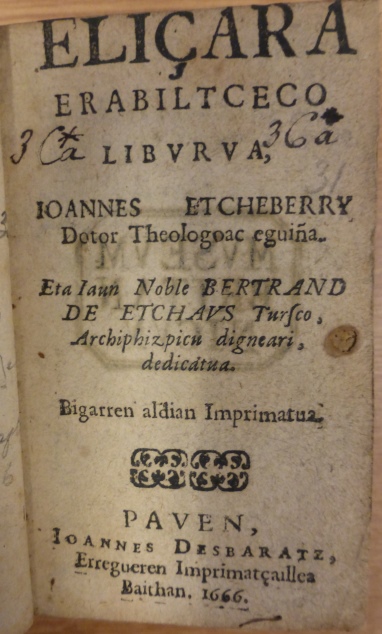 The King’s Library contains a copy of what is arguably the most iconic book in the Basque language, Joannes Leiçarraga’s New Testament, printed in 1571.  For the Basques this text is their Tyndale and King James versions combined. 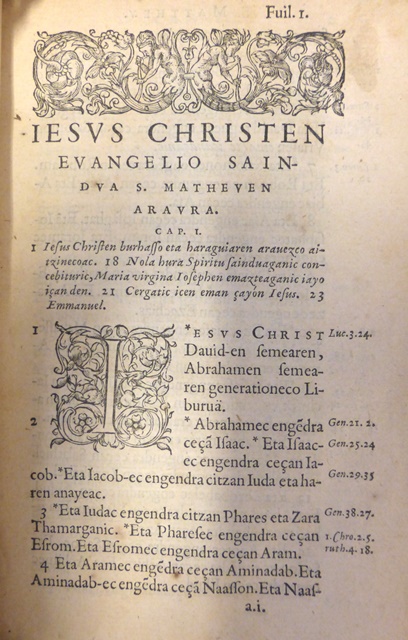 In the second half of the 19th century, purchase became the main means of acquiring foreign books. Thanks to Antonio Panizzi, Keeper of Printed Books from 1837 until 1856, the British Museum Library secured sufficient funds to acquire contemporary works of foreign scholarship systematically. These included books about Basque, as about other foreign languages.

The increase in acquisition budgets also allowed the Museum to bid ambitiously at book sales.  One of the most important for minority language material was the 1873 Paris sale of the Bibliothèque patoise of  French bibliophile Jean Henri Burgaud des Marets (1806-1873), which included  more than 300 works relating to Basque. Of these the Museum purchased 130, mostly religious works, but also periodicals, books of music, travel writing, and scholarly works on the Basque language and region. Most were printed in the 19th century, but a number were from the 18th, e.g. Basque versions of  The Imitation of Christ (Bordeaux, 1720; IX.Basq.7.) and  St Francis de Sales, Introduction à la vie dévote (Toulouse, 1749; 886.d.2.)

The Museum received important donations material from two scholars of Basque during the late 19th and early 20th centuries. The first was Napoleon I’s nephew, Prince Louis-Lucien Bonaparte, who spent much of his life in London.  He commissioned translations of the Song of Songs and of St Matthew’s Gospel into several minority languages and dialects, most notably Basque.  These  were used to compare dialects and as a result Bonaparte produced his dialect map of the seven Basque Provinces (Carte des sept provinces basques, 1863; Maps 18649(4)). Bonaparte’s basic divisions have largely stood the test of time.

The second donor of Basque books to the Museum was the irascible and obsessive Oxford Bascophile Edward Spencer Dodgson (1857-1922).  A pupil of Resurrección María de Azkue, the first director of Euskaltzaindia, the Basque language academy, Dodgson devoted most of his life to studying Basque language and bibliography. This latter interest extended to collecting Basque books, most of which he donated to the British Museum.  These fall into two broad categories. The first were cheap, popular, small-format books in Basque. Their subject-matter goes beyond the usual works of popular piety to include translations of episodes from Dante’s Inferno and Cervantes’ Don Quijote, a popular tale, and various dramatic works.  The second group consists of Dodgson’s own publications: works about Basque, notably the verb, and his editions of earlier works (e.g. those of Rafael Mikoleta and Agustín Kardebaraz). Basque language courses, readers and conversation manuals can also be conveniently included in this group.

A conspicuous feature of Dodgson’s donations are his manuscript annotations. These indicate how, when and where he obtained a particular book, what he paid for it or who gave it to him. Other notes are corrections, including intemperate comments on the authors’ linguistic incompetence. Inside a copy of Tomás Epalza’s El euskara ó el baskuenze en 120 lecciones  he wrote: ‘The author of this collection of bad Basque and silly Castilian is Thomas Epalza of Bilbao’. He corrected the text in many places. In a second copy he wrote: ‘This book is of very little value.  Its lightest mistakes are misprints. These are very numerous indeed.’ 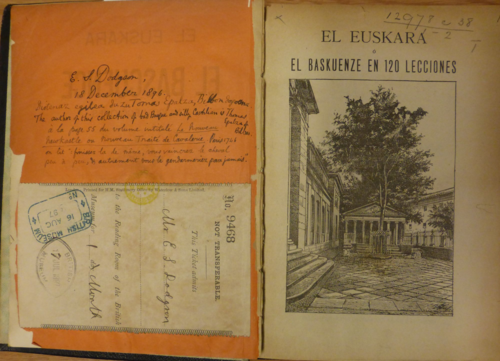 The British Library’s early Basque holdings were thus built up in part fortuitously and in part strategically. That collection strategy has been maintained, with some variation. Today, the Library focusses on works about the language, editions of classic texts in Basque and a selection of contemporary literature (including in Spanish translation).

Posted by Olga Kerziouk at 4:37 PM