Back to Belsen: Using the British Library’s Newspaper Collections

The British Library’s online and microfilm newspaper collections are an invaluable resource for the cultural historian. In a year of significant anniversaries related to the Second World War – from the liberation of Auschwitz and Bergen-Belsen concentration camps to the rescue of 338,000 Allied troops from Dunkirk and the atomic bombings of Hiroshima and Nagasaki – these archives can provide an indirect glimpse of events as they unfolded.

Submerged in the mythological narratives, hackneyed rhetoric and clichéd images that have accumulated in the intervening decades, we are in danger of losing touch with the reality of these events. The reports, photographs and readers’ letters found in the newspapers can enable us to reconnect with that reality through the words of those who were living through it.

The liberation of Bergen-Belsen by British troops in April 1945 was one of the most momentous events of the war’s final months. Using online, word-searchable archives of the Daily Express and Daily Mirror alongside microfilm archives of the Evening Standard, three of the most widely read newspapers in 1940s Britain and all available to access in British Library reading rooms, I’ll take a closer look at reaction to this shocking event.

On 19th April 1945, the Daily Express printed some of the earliest photographs taken at Belsen after its liberation. These were evidence, the paper asserted, ‘of the vileness of the creatures we are fighting’ and of ‘the depths of sadistic brutality to which the German has reverted’. In other words, the unexpected and horrific revelations were taken as proof that anti-German wartime propaganda was rooted in truth, that Germany was a nation of barbarians.

Readers’ letters published in the Daily Mirror and the Evening Standard a few days later echoed these sentiments. ‘The evidence of the German maniacal guilt is for all the world to see’, wrote one, while another claimed, ‘The only decent German is a dead German’, echoing a popular wartime phrase. A Mirror reader suggested conducted tours of the camps for anyone who thinks ‘there are still any good Germans. Perhaps then they would change their minds’. 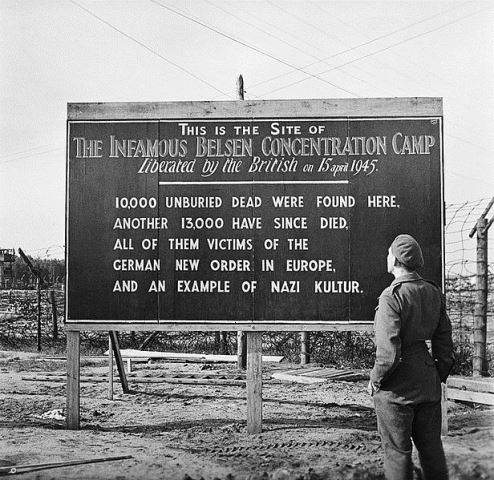 Sign erected by British forces at the gates of Bergen-Belsen after the liberation (Photograph BU 6995 from the Collections of the Imperial War Museum, via Wikimedia Commons)

Such reactions are perhaps unsurprising after six years of total war and a vigorous Ministry of Information propaganda campaign designed to arouse hostility among Britons towards the whole German nation, not just the Nazi elite.

What is more unexpected is the number of obstinately liberal voices that made themselves heard in the midst of a conservative clamour. The Very Rev. W. R. Inge, previously Dean of St Paul’s Cathedral, argued in the Evening Standard against the wholesale denunciation of Germany. Germany is ‘a nation of decent people’, he claimed, and we must attempt to understand how they came to ‘acquiesce in these atrocities’. Others, such as cartoonist David Low, emphasised the number of German nationals imprisoned and killed in the camps, while a reader in south-west London demanded the end of ‘the nonsensical generalisation, so dangerous for the future peace of Europe, that Gestapo, Nazis and Germans mean all the same thing.’ 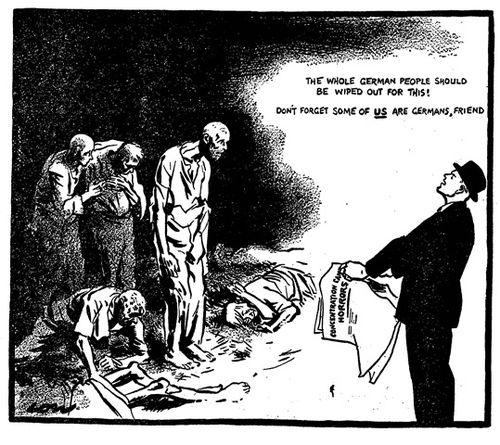 ‘Don’t forget some of us are Germans’: Cartoon by David Low, Evening Standard 19 May 1945 (© Solo Syndication, image from British Cartoon Archive. Reproduced with kind permission)

These brief examples offer a glimpse of the fascinating and diverse public debate in Britain in the days surrounding the liberation of Belsen. With the resources available at the British Library, we can push the clutter of history aside and return, through the words of journalists and readers, to this and thousands of other momentous events across the world and throughout history.

Judith Vonberg is a PhD student in Cultural History and freelance journalist. You can read and follow her own blog here: https://judithvonberg.wordpress.com