In a village of La Mancha, the name of which I have no desire to call to mind, there lived not long since one of those gentlemen that keep a lance in the lance-rack, an old buckler, a lean hack, and a greyhound for coursing. An olla of rather more beef than mutton, a salad on most nights, scraps on Saturdays [‘duelos y quebrantos los sábados’],  lentils on Fridays and a pigeon or so extra on Sundays, made away with three-quarters of his income ...( I, i)

Duelos y quebrantos is defined in early texts as an omelette made with brains.

By examing early cookery books, Professor Barry Ife concluded that it may have been eating cat flesh that made Quijano/Quixote lose his senses.

Quixote’s experiences with cats were not happy ones:

Chapter XLVI: Of the terrible bell and cat fright that Don Quixote got in the course of the enamoured Altisidora’s wooing

[...]  Don Quixote had got so far with his song, to which the duke, the duchess, Altisidora, and nearly the whole household of the castle were listening, when all of a sudden from a gallery above that was exactly over his window they let down a cord with more than a hundred bells attached to it, and immediately after that discharged a great sack full of cats, which also had bells of smaller size tied to their tails. Such was the din of the bells and the squalling of the cats, that though the duke and duchess were the contrivers of the joke they were startled by it, while Don Quixote stood paralysed with fear; and as luck would have it, two or three of the cats made their way in through the grating of his chamber, and flying from one side to the other, made it seem as if there was a legion of devils at large in it. They extinguished the candles that were burning in the room, and rushed about seeking some way of escape; the cord with the large bells never ceased rising and falling; and most of the people of the castle, not knowing what was really the matter, were at their wits’ end with astonishment. Don Quixote sprang to his feet, and drawing his sword, began making passes at the grating, shouting out, “Avaunt, malignant enchanters! avaunt, ye witchcraft-working rabble! I am Don Quixote of La Mancha, against whom your evil machinations avail not nor have any power.” And turning upon the cats that were running about the room, he made several cuts at them. They dashed at the grating and escaped by it, save one that, finding itself hard pressed by the slashes of Don Quixote's sword, flew at his face and held on to his nose tooth and nail, with the pain of which he began to shout his loudest. The duke and duchess hearing this, and guessing what it was, ran with all haste to his room, and as the poor gentleman was striving with all his might to detach the cat from his face, they opened the door with a master-key and went in with lights and witnessed the unequal combat. 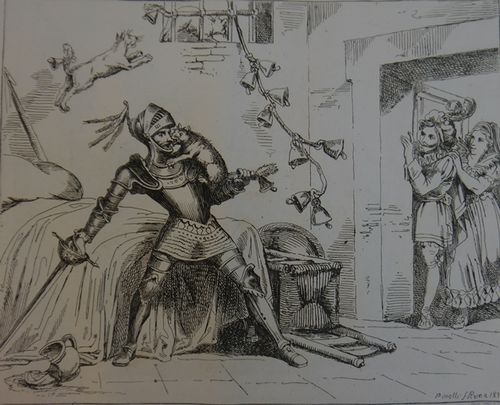 The duke ran forward to part the combatants, but Don Quixote cried out aloud, “Let no one take him from me; leave me hand to hand with this demon, this wizard, this enchanter; I will teach him, I myself, who Don Quixote of La Mancha is.” The cat, however, never minding these threats, snarled and held on; but at last the duke pulled it off and flung it out of the window. Don Quixote was left with a face as full of holes as a sieve and a nose not in very good condition, and greatly vexed that they did not let him finish the battle he had been so stoutly fighting with that villain of an enchanter.  (Book II, Ch. 46)

But look at the below picture from the 1830s. The dog at Quixote’s feet in straight from the text.  But where did the cat at his elbow come from? 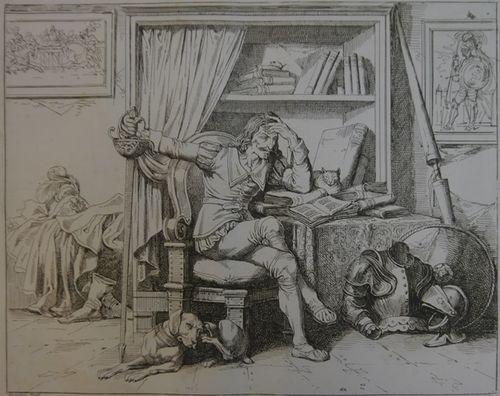 As I see it, not being much of a cat lover, the idea that a cat is a cosy companion to reading is a comfy 19th-century notion.

You probably know of Pangur Bán, who features in the ninth-century Irish poem:

I and Pangur Bán, my cat
'Tis a like task we are at;
Hunting mice is his delight
Hunting words I sit all night.
[...]
'Tis a merry thing to see
At our tasks how glad are we,
When at home we sit and find
Entertainment to our mind. [...] (Robin Flower’s translation)

But Pangur serves as a metaphorical parallel to the reading scholar rather than a literal reading companion.