Lisbon, 20 June 1647: assassination of king of Portugal foiled by miracle

John, Duke of Bragança, came to the throne of Portugal in 1640, putting an end to sixty years of Spanish rule under Philips II through IV, the ‘dominação filipina’.  Alongside his political life, he was also a composer and musicologist.

Luso-Hispanic relations remained tense for a good while, and when an attempt was made on the King’s life in 1647, Father Francisco Brandão had no doubt who the culprits were: Castile.

The opportunity was the King’s attendance at the Corpus Christi procession at Lisbon cathedral on 20 June 1647.  The culprit, Domingos Leite Pereira, “unworthy of having been born in the noble and loyal town of Guimarães”, set out for the capital armed with a musket (“espingarda”) with twelve bullets and two phials of poison to make the shots even more deadly.  He set himself up in a good position to fire, and had two horses ready for his escape.  But at the sight of the pious monarch, he was overcome with “a happy stupor”, threw down his weapon and escaped. 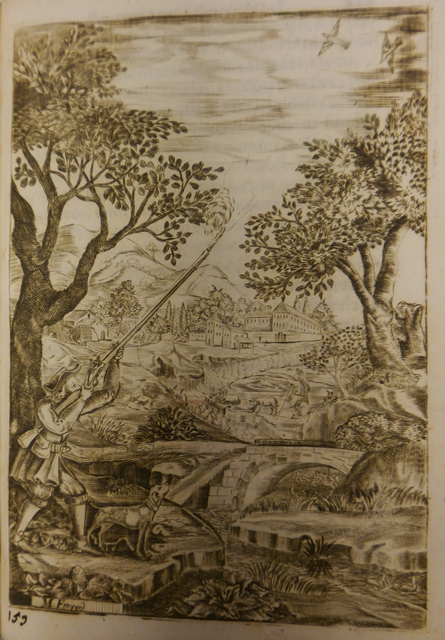 Brandão’s account has been digitised by the Biblioteca Nacional de Portugal.

The British Library has just acquired another pamphlet on the assassination attempt, a self-styled Mercurius gratulatorius (celebratory newsheet): 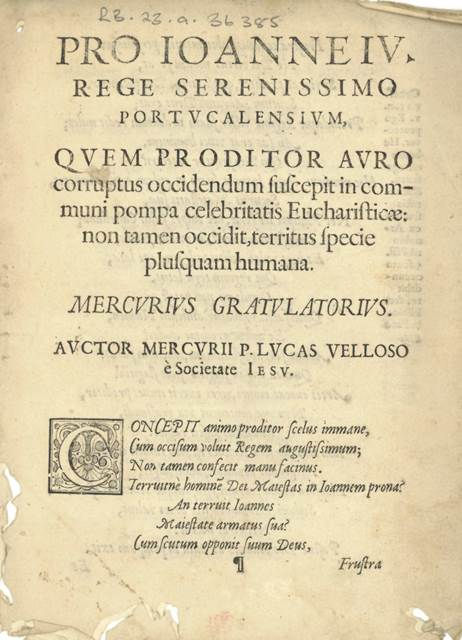 Velloso is not narrative but elegiac: though he gives the detail that the traitor was corrupted by gold (“proditor auro corruptus”) he does not name him or give the date of his attempted crime.  He describes the criminal as being not happily stupefied but terrified, either by the majesty of God apparent in the king, or by the king’s majesty itself.  Brandão in contrast describes in great detail  the route of the Corpus procession through the streets of Lisbon.  If challenged, Velloso would doubtless have quoted Aristotle: “poetry is more philosophical and more elevated than history, since poetry states more universal things whereas history states particular things” (Poetics IX).

This is a rather modern concept of the miraculous: a sudden change of heart is a more subtle miracle than the speaking babies and reattached limbs of medieval tradition.

Stop press: while working on this post I discovered that the BL has another pamphlet on this topic:

Previously wrongly dated to 1642 in our catalogue, it has now been corrected to 1647.

Macedo is light on facts but knows his Scripture: he ranks the miracle of the king’s deliverance with the sacrifice of Isaac, David’s victory over Goliath and the conversion of Saul to St Paul.