The Passion of Christ considered as an uphill bicycle race… and what should women wear?

[Jesus got away to a good start.

In those days, according to the excellent sports commentator St Mathew, it was customary to flagellate the sprinters at the start the way a coachman whips his horses … Jesus, then, got off in good form, but he had a flat right away. A bed of thorns punctured the whole circumference of his front tyre.]

The playful pataphysician Alfred Jarry published ‘La Passion considérée comme course de côte’ (‘The Passion of Christ considered as an uphill bicycle race’) in April 1903 in the satirical Le Canard Sauvage, three months after the inaugural Tour de France was advertised in the newspaper L’Auto, as ‘la plus grande épreuve cycliste du monde entier’ (the biggest cycling challenge in the whole world). Extreme competitive cycling, still relatively new at this point, becomes an ordeal of epic proportions – tantamount to the suffering of Christ, or at least to something never before experienced by man. Late 19th- and early 20th-century French literature absorbs the new image of the bicycle into its pages, as the Realism of Zola and others attempts to present the preoccupations of contemporary society in parallel, and the alternative literature of Jarry sees symbolic potential in the new machine. 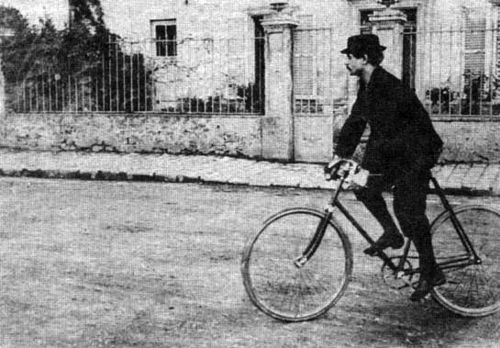 Jarry’s last novel Le Sûrmale (The Supermale; 1902), thematises the bicycle once more, using it to transport a narrative exploration of man’s virility, power and death. André Marcueil, the protagonist, undertakes the impossible 10,000 mile cycle from Paris to Irkutsk, powered by perpetual-motion-food, a substance which allows constant muscular regeneration during activity – and which allows Marcueil the energy for a record-breaking sexual performance on the way (89 ‘conquests’, for those who might be interested). Jarry’s perpetual mover is an ‘coupling of man and machine’, to use Paul Fournel’s description of five-time Tour-winner Jacques Anquetil in his 2012 book Anquetil tout seul. As Freud might have it, the man(-machine) has become a kind of ‘prosthetic God’ – returning us, then, to the demiurgic realm of cycling where we began.

Indeed, cycling, according to French thinkers, can elevate man to the point of transcendence. Roland Barthes, in ‘Le Tour de France comme épopée’ (‘The Tour de France as Epic’, from Mythologies), suggests that, ‘The Tour too, at several points, brushes against the inhuman world: on the Ventoux, we have already left the earth, there we are next to unknown stars’. Cycling is self-discovery for the anthropologist, Marc Augé:

The first stroke of the pedal is the acquisition of a new autonomy, the great escape, palpable freedom, the movement of the point of the toe, when the machine responds to the body’s desire and almost pre-empts it. In a few seconds, the marked horizon frees itself, the landscape moves. I am elsewhere. I am an other, and yet I am myself like never before; I am what I discover. (Eloge de la Bicyclette)

But perhaps all this continental abstraction detracts from a more concrete freedom afforded by the bicycle, one which might temper the Supermale’s authority over it. In Emile Zola’s Paris (1897-8), Marie is confounded by some women upholding dress codes while cycling:

Can you understand that? Women, who have the unique opportunity to put themselves at ease, to fly like a bird, legs finally freed from their prison, and who refuse! If they believe to be more beautiful with a shortened schoolgirl’s skirt, they are wrong! And as for modesty, it seems to me that one ought to be more comfortable showing one’s calves than one’s shoulders […] There are only culottes, the skirt is abominable!

Women have the opportunity to wear short trousers – a freedom that the introduction of the bicycle demands! 1898 also saw the publication of Miss F. J. Erskine’s Lady Cycling (reissued by British Library publications in 2014) which joins Zola’s Marie in carving a space for women cyclists… ‘in moderation’. For Miss Erskine, ‘on no point… has a hotter controversy raged’. On fashion, however, the author cannot concede to the comforts of Marie in Paris. ‘Cycling dress was not the fine art it is now,’ writes Erskine, ‘for park riding we must have an artistically cut skirt, artfully arranged to hang in even portions each side of the saddle’.

Perhaps we need to travel once again to find the answer to the eternal question, succinctly phrased as ‘Rock oder Hose?’ (‘Skirt or Trousers?’), in Der Radfahrsport in Bild und Wort, published by Dr Paul von Salvisberg in 1897. Which is it to be? ‘Both, and, in fact, each have their appropriate time’. A practical compromise. 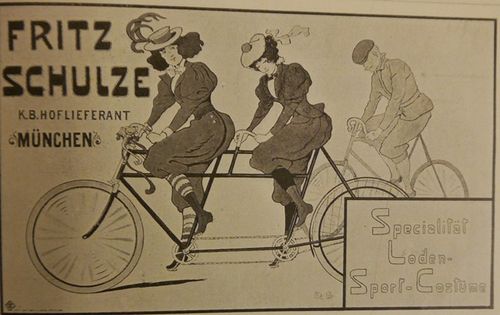 Whether physically free from the dress and the corset, or free from terrestrial conventionality in a ride amongst the stars, cycling is freedom. That freedom is gained through joining the self (and machine) with nature, as one moves through it. As Dr Ludwig Ganghofer, in Der Radfahrsport in Bild und Wort, enthusiastically writes of a cycling tour:

On the leaves and grass, the dew sparkles; you hear a hundred birds, as if it were a single song; fresh air breathes all around you, and you drink it deeply in thirsty sips. 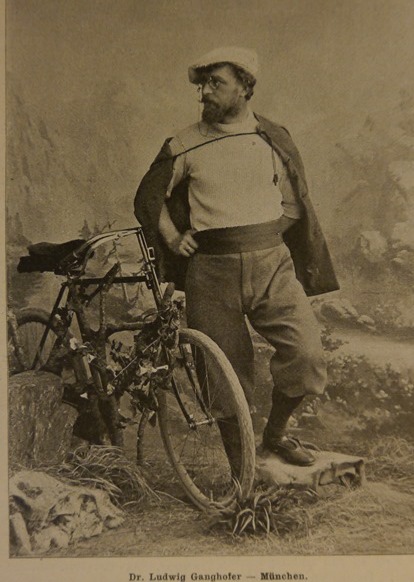 As summer approaches, we too need to reunite ourselves with nature, ride amongst the stars… This may prove difficult in the city, and we should end here with a word of warning from Miss Erskine:

In the vicinity of large manufacturing towns the rowdy element may at times annoy ladies riding alone, though I have, myself, always met with the greatest kindness and courtesy; still, this may have been by exceptional good fortune, and I have no wish to boast of it.