In the summer of 1814, with Napoleon defeated and exiled to Elba, Britons were eagerly welcoming a military hero of the campaign against the French to their shores. It was not (or not only) Wellington’s  name that they shouted in the streets, but that of ‘Old Blucher’, the 71-year-old Prussian Field Marshal who had led the victorious allies into Paris and done so much to secure their victory.

Gebhard Leberecht von Blücher (his British admirers seldom wrote and probably never pronounced the umlaut) had enjoyed a long and successful military career, despite over a decade of enforced retirement after he got on the wrong side of Frederick the Great. During the Napoleonic Wars he led Prussian troops with mixed success but great courage, and was instrumental in what was believed to be Napoleon’s final defeat in 1814. 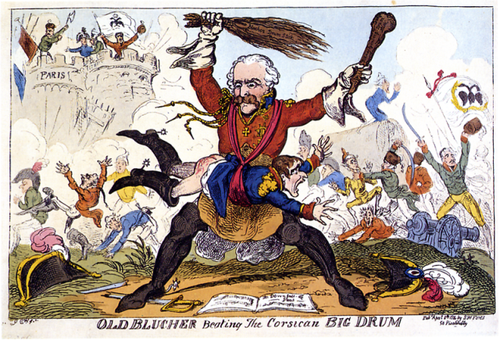 It was following this triumph that Blücher visited Britain with other allied leaders and commanders. A trawl through the British Newspaper Archive confirms that he was the most enthusiastically fêted of the visitors, drawing crowds wherever he went. A satirical poem, ‘Blucher and the British Ladies’, in the Morning Chronicle of 23 June 1814 claimed that he could barely go outside without being mobbed by female admirers. Ladies could also show their admiration by wearing the ‘Blucher bonnet and spencer’ and ‘Blucher boots and slippers’, or by dancing to a ‘Blucher Waltz’. Indeed Blücher’s name became attached to many things, including George Stephenson’s first steam locomotive and a racehorse which won the 1814 Derby - while the Field Marshal himself looked on. 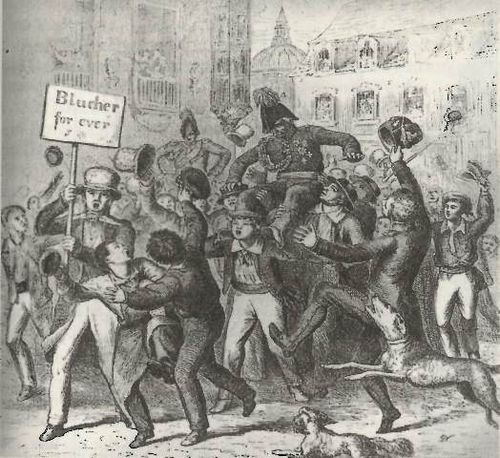 Blücher had hoped to retire to his Silesian estates after the triumphs of 1814, but he was recalled following Napoleon’s return from Elba in March 1815. Despite defeat and injury at the Battle of Ligny on 16 June 1815, he went on to lead his forces to Waterloo two days later. The Prussians’ arrival was decisive in securing the allied victory, and when Wellington and Blücher met late in the evening they saluted each other as victors. 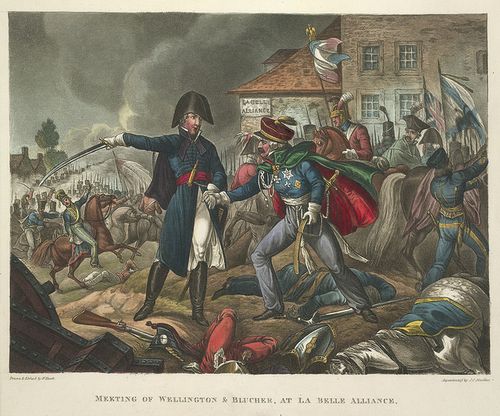 Following Waterloo, Blücher at last retired for good. He did not visit Britain again, but he was still  celebrated by the British as the joint victor of Waterloo: in a travelling display of Madame Tussaud’s waxworks he was even placed alongside the national heroes of the Napoleonic wars, Nelson and Wellington. However, as the 19th century progressed, popular British accounts of Waterloo began to play down the role of the Prussians and attribute the victory solely or primarily to Wellington. Today Blücher’s name is little known among the general British public, and some might be surprised – perhaps even indignant – to learn that Wellington and his forces needed German assistance to win the day.

However, Wellington himself seemed in no doubt at the time. In his official dispatch of 19 June 1815 he wrote, “I shall not do justice to my feelings or to Marshal Blücher and the Prussian army, if I do not attribute the successful result of this arduous day, to the cordial and timely assistance I received from them.”

Perhaps this year’s Waterloo anniversary will remind the British public of Blücher again, and win him back some of the respect he enjoyed here in 1814 and 1815.