“Dear Comrades,” the letter began, “On the 18th anniversary of the October revolution, we send you our greetings.” Dated 10 October 1935 and signed by Soviet Esperantists working in the Donbass region of the Soviet Union, the letter endeavored, via the formulaic ardour of Stalinist homage, to “tell how the miners used to live before the revolution, and how they live now freed from the capitalists, thanks to the Communist party and the genius of the revolutionary leader Lenin, and the wise leadership of our beloved comrade, friend and leader Stalin.”

Translated from Esperanto into English and entitled “From a Russian Miner” (although it was in fact sent not from Russia but from Postyshevo, now Krasnoarmiisk, in Ukraine), this hearty missive appeared in the pages of a 1936 issue of La Laborista Esperantisto (The Worker Esperantist; British Library P.P.3558.ibl.) – the periodical of the British Section of the global Esperantist organization known as Sennacieca Asocio Tutmonda (S.A.T.) [World Anational Association]. As the standard inside cover of La Laborista Esperantisto reliably explained, S.A.T.’s primary aim was “to utilize in practical ways the international language, ESPERANTO, for the class aims of the working class throughout the world.”  S.A.T. insisted that Esperanto allowed workers to share ideas and educate one another; to collaborate in pursuit of the revolutionary aims of the worldwide proletariat; and to foster “a strengthened feeling of human solidarity” among Esperantist workers otherwise separated not merely by spatial distance, but also by national borders, languages, and citizenship regimes. 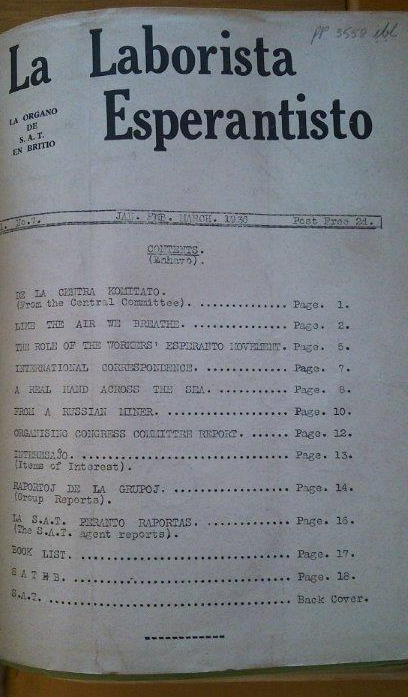 For its own part, “From a Russian Miner” carried the imprimatur of a regional outpost of the Union of Soviet Esperantists. When in 1921 the Union of Soviet Esperantists was established in Petrograd, its founding members devoted themselves to the popularization and deployment of Esperanto as a means of fostering cultural exchange, revolutionary networks, and friendly relations between Soviet workers and their comrades abroad. The global solidarity of proletarian Esperantists would thus advance the global solidarity of the proletariat as a whole.

Throughout the late 1920s and early 1930s, Soviet Esperantists sought to realize this broad internationalist goal largely through the increasingly regulated practice of what the Soviets called “workers’ correspondence.” Soviet Esperantists adapted this method of propaganda, committing themselves to flooding foreign news outlets and workers’ associations with carefully crafted missives like the one that appeared in La Laborista Esperantisto in 1936. The point was to extol Soviet achievements and squash anti-Soviet “rumours” propagated by deceitful capitalists – and to do so via the international auxiliary language of Esperanto. Esperantist leaders abroad could then, in the hoped-for scenario, translate and reprint the Soviet Esperantists’ letters in the foreign press, thereby transmitting official Soviet ideology to workers abroad. 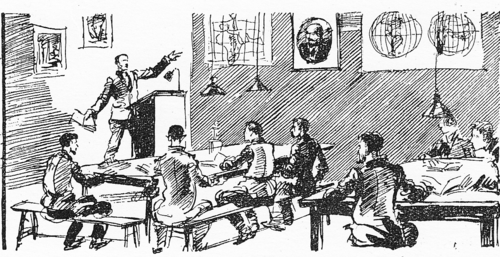 By the time “From a Russian Miner” appeared, the Union of Soviet Esperantists was in crisis. On the eve of the Stalinist terror that would devour many of the organization’s members, the problems that bedevilled it  ranged widely. While an analysis of these problems goes beyond the scope of this blog entry, “From a Russian Miner” highlights certain flaws in the Union’s  approach to fostering global proletarian solidarity under the conjoined red star of the Soviet Union and green star of Esperanto.

“From a Russian Miner” adopted the format of a letter, but reads like a singsong recitation of talking points issued from a bureaucratic office. As promised in its opening paragraph, it first enumerates the horrors and indignities of miners’ pre-revolutionary life in tsarist Russia, and then celebrates their  joyful new Soviet life. Living and working conditions prior to the revolution, the letter explains, were miserably inhumane as workers inescapably sacrificed themselves to “create riches for an army of parasites.” Production was not only punishing and humiliating, but also shamefully primitive “as nothing was known of machinery.” Clean drinking water was denied the sickened workers, as was even a rudimentary education. 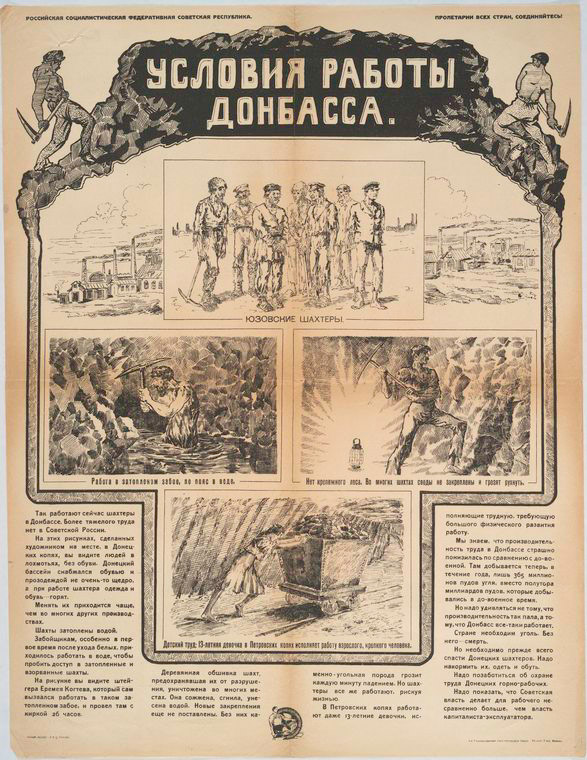 The narrative arc marches stalwartly onward in such fashion to the revolutionary climax: the dawning of the “bright and sunny day” that is the contemporary Soviet Union. The life of the Soviet miner, the letter explains, is one of fresh air, clean water, and nutritious food. Electricity illuminates the workplace and modern machinery powers industrial production. First-aid stations, bathhouses, classrooms, and a Palace of Culture ensure good health and enlightenment. “In comparison with our past life, our present life is scarcely credible,” the letter explains.  “Every miner has his little house surrounded with greenery. He has a vegetable garden, pigs, birds, and perhaps a cow.” All of this is owed, the letter concludes, to the wise revolutionary leadership of Lenin and Stalin.

No doubt the so-called “workers’ correspondence” that Soviet Esperantists transmitted abroad in the 1920s and 1930s did energize and inspire foreign workers, igniting their imagination of everyday Soviet life as a model to be emulated globally. In this way, Esperanto did serve the Soviet Union in pursuit of its internationalist aims. Yet the formulaic missives authorized by the Union of Soviet Esperantists for foreign consumption also obstructed the organization’s stated effort to facilitate relationships between Soviet workers and their comrades abroad. Taking “From a Russian Miner” as a representative example of permissible Soviet Esperantist correspondence in the Stalinist 1930s, it is impossible to overlook not only its unnuanced presentation of an entirely unblemished Soviet life, but also its unrelenting monologic approach. The letter’s gaze focuses resolutely inward while its tone is conspicuously incurious about life abroad. “From a Russian Miner” poses no questions to foreign Esperantists, nor does it invite questions from them. The letter’s portrait of Soviet working life is numbingly generic and depersonalized; the collective workers’ “we” is narratively flattened into the faceless beneficiary of the October Revolution. The letter thumps with triumphal celebration of Soviet achievements, but palpably lacks the human touch of the Soviet citizens who wrote it.

Brigid O’Keeffe is an Assistant Professor of History at Brooklyn College of the City University of New York.  In June 2015, she joined The Reluctant Internationalists project at Birkbeck College as a Visiting Fellow. During this time, she conducted research at the British Library, using its extensive collection of materials that document the global history of Esperanto and Esperantism.