Pleasure and Death in Revolutionary Paris

The Palais-Royal, which still survives today in Paris, just north of the Louvre, was built between 1637 and 1641, and remodelled between 1781 and 1784, when it belonged to the Orléans family and operated as a garden surrounded by an arcade of shops and restaurants. It became notorious as a resort of prostitutes, and five editions of an eight-page guide to ladies of pleasure can be found in the French Revolutionary tracts (shelfmark F.441.(1).) 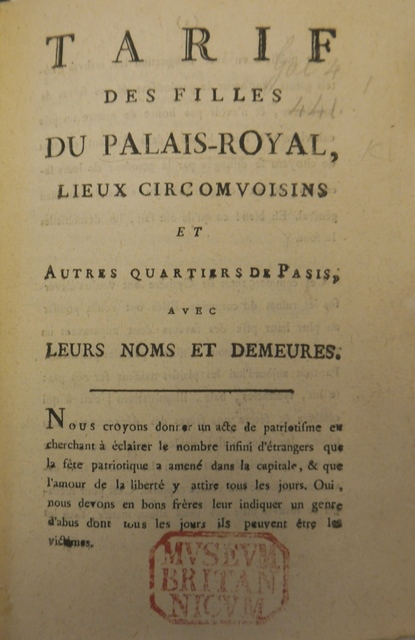 The Tarif des filles du Palais-Royal was published in 1790, for the benefit of the many strangers drawn to the capital by their love of liberty and desire to participate in patriotic festivals. Many such visitors are being scandalously over-charged by the ‘Commerçantes de Cythère’ so these ladies, some of whom actually resided in the Palais-Royal, are listed, with their charges, which vary considerably, from six to two hundred livres, or more.  Sophie and her sister are willing to entertain you for the night, with supper, for two hundred livres in the rue basse du Rempart.  Duchausour and her sister lodge with a tapestry-maker in the rue de Fers, and charge one hundred and eighty livres. Stainville, nicknamed the Maréchale, has a brothel of six girls in the rue neuve des bons enfans (rather ironic as they are not good children, unless at their profession). Issue three mentions the trades followed by some of the ladies, such as sellers of dress or jewellery, actress or singer.

Issue four advises readers of either sex that they can consult La Dame le Large, midwife, at her office near the Opéra over their health, for a subscription of three louis a year. All ‘damaged’ persons can be ‘made new’. This issue also adds some descriptions of the ladies, such as ‘black, crinkly hair’, ‘soft and inactive’ and ‘warning that she sleeps all night’. Other ladies are described as ‘very pretty’, having ‘a beautiful throat’, or having ‘seductive features but too large a mouth’. One is ‘very clean and has a bidet’. Another is no longer in business since her last child. Georgette is a little ‘mignarde’ (mannered), but loosens up after she has drunk a bowl of punch. Issue five details some of the refreshments provided, such as cakes, vanilla ices or beer.  Others offer gambling or card games such as biribi and bouliotte. Mademoiselle Grand-Jean offers a ‘chansonnette’, a light-hearted or satirical song.  A lady called Saint-Fard is ‘polissonne’ (‘teasing’ or ‘licentious’) if well paid. 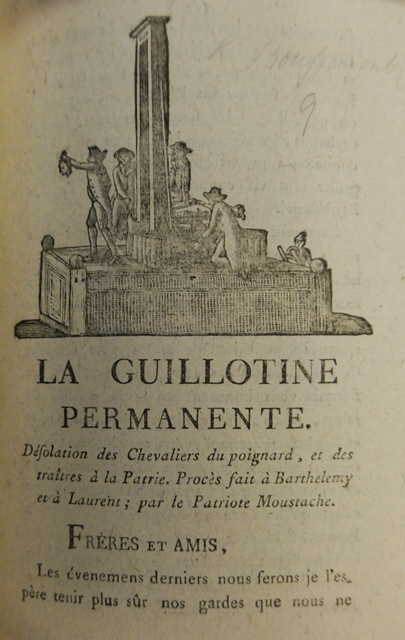 A stark contrast is provided by tract F.437.(9), an eight-page attack on saints and aristocrats by L. Boussemart, known as ‘Moustache’. On the first page ‘La guillotine permanente’ [above] is an engraving of the guillotine in action, which a footnote informs us is the guillotine at the Carousel (next to the Louvre) drawn from life, an illustration which can be purchased separately as a print.

Boussemart admits he was a former monk, and launches a virulent attack on saints Laurence and Bartholomew for being aristocrats. Now, he says, we have saints Rousseau, Voltaire and Francklin [sic – ie Benjamin Franklin] who have revealed the people’s rights.  As it is too late to guillotine Laurence and Bartholomew, they should be erased from history. He ends with words for a bloodthirsty song calling for a quick trial for traitors leading straight to the guillotine, so that their heads should pay for the cost of the machine. The last verse calls La Fayette to the guillotine so that this ‘monsieur blondinet’ should also pay the price of his treachery.  The Marquis de La Fayette, hero of the struggle for American independence, was a moderate revolutionary, and his support for the king and a constitutional monarchy resulted in his denunciation as a traitor by the time this pamphlet was written, probably in 1793.