Arming for the Armada? A 16th-century German view of Drake

In late July and early August 1588, English ships were skirmishing in the Channel against the Spanish Armada, the naval invasion force sent against England by Philip II of Spain. Probably the best known of the English captains then, and certainly the best remembered today, was Sir Francis Drake, whose Cadiz Raid the previous year had significantly set back plans for the Armada and whose circumnavigation of the globe in 1577-80 had brought him wealth and royal favour.

Drake’s fame was not restricted to England, as a rare hand-coloured broadside acquired by the British Library in 2008 demonstrates. Printed in Germany (or possibly the Low Countries), it shows Drake preparing for a military expedition, and is accompanied by a set of verses in German, put into the mouth of Drake himself and calling upon ‘all Christians’ to join him in fighting the ‘Antichrist’. Drake calls himself ‘Drach’ – a Germanisation of his name which, like the Spanish ‘Draque’ or Latin ‘Draco’ can also mean dragon, but while in Spanish propaganda Drake was the dragon as marauding beast, here he is the dragon as bold protector. 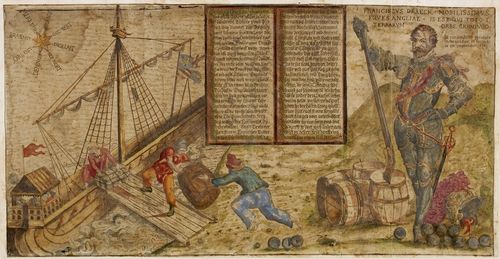 The broadside is a curious production. On the right-hand side is a full-length portrait of Drake, dressed in armour and carrying a musket. While this is carefully and realistically done and appears to be based on reliable contemporary depictions, the rest of the image is clumsily executed: the ship on the left-hand side is a most unseaworthy vessel, long and impossibly narrow. At the stern is a small cabin-like structure in which are huddled five badly-drawn figures. They, and the ship as a whole, are out of scale with the other three sailors and the cargo which they are loading. 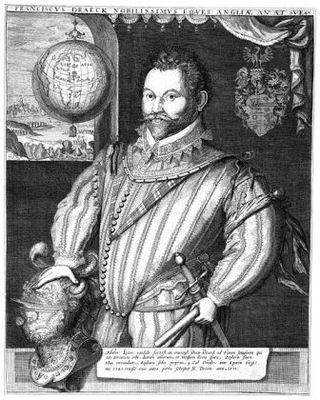 The textual elements also appear ill-designed. The inscription has a redundant extra T at the end of the second line and the letters of ‘Circumducto’ are crammed close together. The box containing the verses is placed off-centre and gives the impression of being an afterthought rather than part of a whole design;  at first glance it can appear to have been pasted on to an existing picture, an illusion encouraged here by the thick border painted around it. And the verses are not exactly great poetry, but that is hardly unusual in this genre (and besides, Drake has inspired plenty of doggerel throughout the centuries).

The broadside is undated, but clearly post-dates Drake’s circumnavigation (referred to in the inscription), and its call to arms suggests a date in the mid- to late-1580s, around the time of the Cadiz Raid or the Armada. Although it has been suggested that the threat to Christendom referred to in the verses is the Ottoman Empire, the text includes enough familiar elements of Protestant anti-Catholic discourse to make it more likely that the Catholic Church (and Spain in particular) is the ‘enemy’ being described.

While not a great work of art either visually or poetically, the broadside is a fascinating piece of 16th-century propaganda, and shows how the fame of one country’s hero could travel in the age of print.