Poet in a landscape: the drawings of Johann Wolfgang von Goethe

Johann Wolfgang von Goethe, who was born on 28 August 1749, is best known as Germany’s ‘national poet’, but he was a man of many parts. Among his various talents and interests, he was a keen amateur artist. Some 2,600 of his drawings survive, many from his Italian journey in the late 1780s. Goethe himself claimed that that he realised during these travels in Italy that he had ‘no talent for visual art’, but he continued to draw throughout his life, especially landscapes.

The British Library’s Stefan Zweig collection includes three such drawings. The first, Zweig MS 154 (below), depicts the Kammerberg near Eger (modern-day Cheb in the Czech Republic): there is a rocky hillside with a winding path leading up to a small building, perhaps an observatory, which stands on its summit.  Towards the bottom right hand corner two sketchily drawn figures can be seen, apparently working at the edge of a quarry sketched in such a way as to indicate the geological features of the terrain. 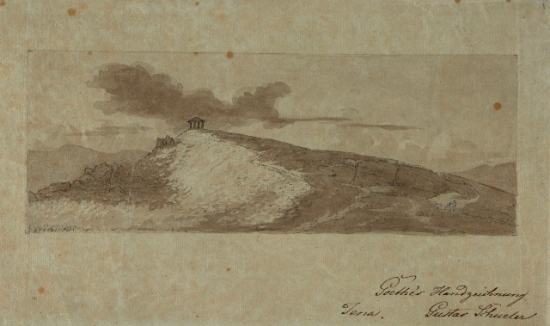 The drawing was made during Goethe’s first visit to the Eger region in 1808, an area that he visited 19 times in all.  Having a lifelong interest in geology and geological formations, he was particularly moved to investigate the historical origins of the Kammerberg (now known to be an extinct prehistoric volcano), tending at first to subscribe to the Vulcanist theory that the source of rocks was igneous, but later lending his support to the Neptunist theory of aqueous origins.  He spent his time there collecting samples, making close observations, writing descriptions and making drawings.

The other two drawings, Zweig MS 217, are mounted back to back in a frame. One depicts castle ruins in a hilly setting with the sharp bend of a river in the foreground;  the other, slightly smaller, shows a river with partially wooded banks winding through an undulating landscape. These views have never been formally identified, but it seems very likely that they are taken from the countryside near Jena, a town for which Goethe had a special affection, regarding it almost as his second home. After his first visit in 1775 he became a frequent visitor, and over the course of his life the sum total of time that he spent there amounted to something like five years. 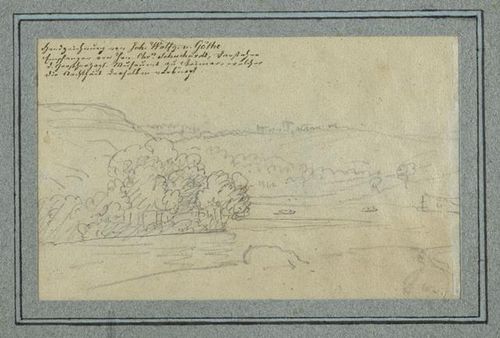 The river landscape in the smaller drawing (above) seems to bear quite a strong resemblance to the valley of the Saale, while the ruined castle in the larger drawing (below) may perhaps be the Lobdeburg, a 12th-century fortress above Jena whose medieval owners were credited with founding the town, and which fell into decay around the end of the 16th century. For many years Goethe was accustomed to stay with his friends, the Ziegesar family, in Drackendorf, an area of Jena just below the Lobdeburg, and the ruins were a favourite destination for walks with the young daughter of the house, Sylvie von Ziegesar, one walk in particular delighting him so much that he celebrated by composing the poem ‘Bergschloss’  in 1802. 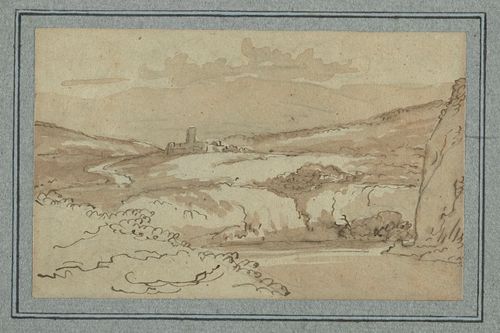 The dimensions of the two landscapes suggest that one or both of the drawings could have been intended for an album, perhaps Goethe’s  ‘Rotes Reisebüchlein’, an album made in 1808 for 18-year old Wilhelmine Herzlieb, one of the many young women who attracted him and on whom he is said to have modelled the character of Ottilie in his novel Die Wahlverwandtschaften.

These represent three of the seven Goethe drawings owned by Zweig at various stages of his collecting career, and are the only three of the seven known to be in a public collection. Thanks to the recent digitisation of the literary manuscripts from the Zweig collection, they will soon be available to view via the British Library’s Digitised Manuscripts catalogue.