A Friendship with Freud: Stefan Zweig and the Father of Psychoanalysis.

The influence of Sigmund Freud and his theories of the mind on modern culture can hardly be underestimated. Whether we are admirers or detractors, whether we consider his views to be still valid or discredited today, no-one can deny that even a cursory knowledge of his ideas colours the way we view the world.  Terms like ego, libido, and indeed psychoanalysis, have passed into common use, and of course we all make ‘Freudian slips.’

Among Freud’s admirers in his own day was Stefan Zweig, who said that Freud had ‘deepened and expanded our knowledge of the human mind like no one else of our time’ and remembered his conversations with Freud as among the ‘greatest intellectual pleasures’ in his life. The correspondence and friendship between the two men began in 1908 when Zweig sent Freud a copy of his drama Thersites and continued until Freud’s death.

Zweig was fascinated by Freud’s theories and by the idea of examining human psychology.  In his fiction he often portrays particular psychological types and their reaction to specific situations, and it is striking how many of his stories are presented in a framing narrative, as letters or as an account told to an initial narrator by another, perhaps in part to place the first narrator (and the reader?) in the position of the listening analyst.

If Zweig admired Freud, the feeling was mutual. Freud enjoyed and appreciated Zweig’s works of both fiction and biography, praising his sensitivity and perception, and finding his own theories demonstrated in Zweig’s  fictional situations.  In 1924 he presented Zweig with the manuscript of his 1907 lecture ‘Der Dichter und das Phantasieren’  (‘The Creative Writer and Daydreaming’) , an appropriate gift from psychologist to author. In the lecture Freud describes creative writing as an adult substitute for the imaginative play of childhood, both – like dreams – being a way of expressing repressed desires. The manuscript was one of those that Zweig kept when he went into exile and is now in the British Library’s Stefan Zweig Collection. 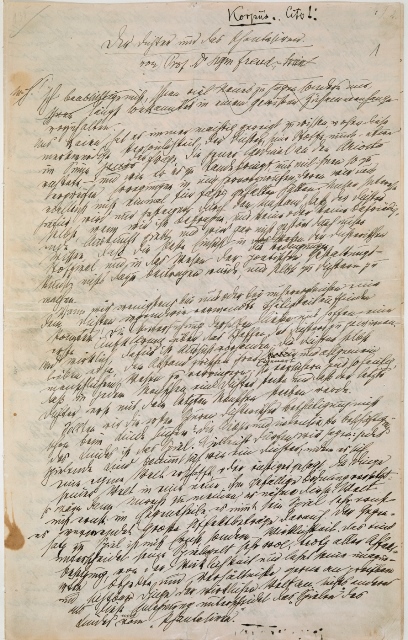 In 1931 Zweig published a study of Freud as one of three linked portraits of ‘mental healers’ (the others being Franz Anton Mesmer and Mary Baker Eddy). Freud was more guarded in his praise of this than of other works by Zweig, finding the portrayal of him too conventional, and damning Zweig with faint praise for managing a reasonable description of psychoanlaytic theory despite (as Freud believed) knowing nothing about it before starting work. However, Zweig was writing for a more general audience – indeed, this was one of the first studies of Freud aimed at a non-specialist public – and the book, like all Zweig’s works at the time, was a bestseller, whatever Freud’s reservations.

Towards the end of Freud’s life he and Zweig were both living in exile in London. Zweig regularly visited Freud in Hampstead, on one occasion in July 1938 bringing another great admirer, Salvador Dalí, with him. While Freud and Zweig talked, Dalí sketched a portrait of Freud. Later Zweig could not bring himself to show Freud the portrait  ‘because Dalí had prophetically shown death in his face,’ perhaps a strange attitude given Zweig’s admiration for Freud’s fearlessness in facing unpalatable truths, but clearly the reaction of an affectionate friend as well as a keen admirer.

Despite the cancer which was slowly killing him, Freud lived on for over a year after Dalí’s visit, dying on 23 September 1939. Zweig delivered the eulogy at his funeral and said that without Freud’s influence, ‘each of us would think, judge, feel, more narrowly, less freely, less justly.’