Gonzalo Fernández de Oviedo (1478-1557) is best known nowadays as the author of the Historia general y natural de las Indias (1535, second edition 1547),  a pioneering account of the history and natural history of the Americas.

He is also of interest as a writer and courtier whose career spanned the Atlantic.  He was also obviously something of a dog-lover.

The focus of today’s blog is the Libro de la cámara del príncipe don Juan.  This is a very full account of the personnel and activities of the court of Prince John (born 1478), son of the Catholic Monarchs.  John died young in 1497 at the age of 18.  The Libro (first manuscript version 1547-48, revised a year later) was prepared by Oviedo for the guidance of Prince Philip (later King Philip II).

One detail which Oviedo added in the second version was this account of Bruto (Brutus), the prince’s greyhound.

He had black and white patches.  He was not a handsome beast, as his father must have been a mastiff, and so he did not have a pretty head, but he was strongly built and not very tall.   But he was clever, as dogged as could be and marvellously quick at the attack. 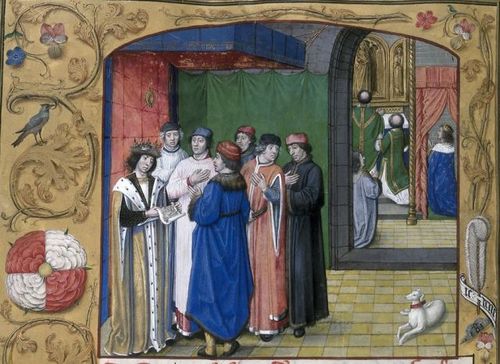 When on the road or hunting, the prince would deliberately drop a glove or handkerchief and once they had gone on a league or so, would say, “Bruto, bring me my glove.”  And the dog brought it to him in his mouth, as pristine and clean of dribble as if a man had brought it; and this regardlesss of whether the terrain was open or thickly covered in trees.

A number of men could be fifteen, twenty or thirty paces away, and the prince would say, “Bruto, bring me that man.”  And he would go and take him by the arm, very gently and without sinking his teeth.  And when the prince said, “Not him,” Bruto left him and fetched another.  And when he said, “Not him, but the one with the green, or grey cape,” as he was commanded so he did, in such as way that it seemed he knew his colours, like a person of good judgment.  He was a marvellous tracker.

When the prince was buried at dawn on 5 October 1497 in the Cathedral of Salamanca, Bruto lay down at the head of the tomb, and whenever they took him away he returned to his place; so that finally they supplied him with a cushion to lie on, day and night, and they fed and watered him there, and when he went out to perform his necessities, he returned to his cushion.  When the King and Queen left for their daughter’s weddding in Portugal, on their return they found him there still.

The prince’s final resting place was at Avila. 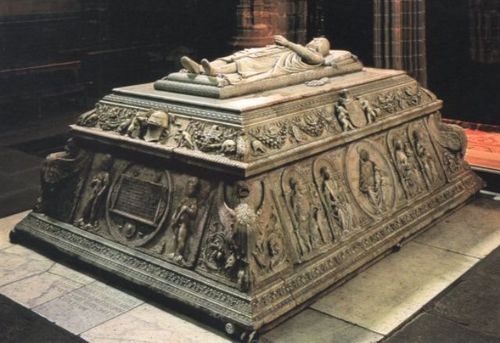 The tomb of Prince John at Avila (Image from Wikimedia Commons)

Writing in 1549 of events of 1497, Oviedo obviously found Brutus as admrable as Greyfriars Bobby was to be four and a half centuries later, an exemplar of canine loyalty above the bestial standards of the late medieval court.