Champfleury, pseudonym of Jules Husson Fleury (1821-89), is little read nowadays,  though his name is familiar to students of French 19th-century culture because of the variety of his interests and activities, both literary and artistic. A prominent member of bohemian circles in Paris in the 1840s, a novelist and short story writer, he also championed the painter Gustave Courbet and realism in art and literature, and played a key role in the ‘rediscovery’ of the Le Nain brothers, 17th-century painters of ‘reality’ who, like Champfleury himself, were born in Laon in Picardy. He had a lifelong interest in ‘popular’ arts  and wrote on a wide variety of subjects including  pantomime, caricature,  popular imagery, Japanese prints and ceramics. For the last 17 years of his life he was the curator of the Manufacture nationale de Sèvres.

Champfleury’s most  popular work was his book on cats, published in 1869.  Les Chats, histoire, moeurs, observations, anecdotes was advertised by a poster with a lithograph by Manet, Le rendez-vous des chats (‘The cats’ rendezvous’), showing two cats on a rooftop engaged in a mating game. The black cat was no doubt a reminder of the cat that featured prominently in Manet’s Olympia, the painting that had caused a scandal when first displayed in 1865. Manet’s lithograph was also used on the poster for the second edition of Champfleury’s work a few months later and an engraving of it appears in the book itself. 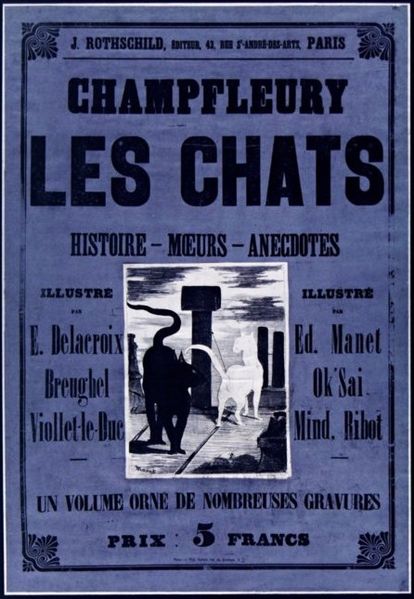 The popularity of the book was such that it was reprinted twice in quick succession and two deluxe editions followed in 1870 with several additional texts and illustrations including, in the fifth edition, an etching by Manet, Le Chat et les fleurs (‘Cat and Flowers’), showing a cat on a balcony near a ceramic jardinière, an image influenced by Japanese prints and also a reference to Champfleury’s interest in ceramics. [Fig.3] 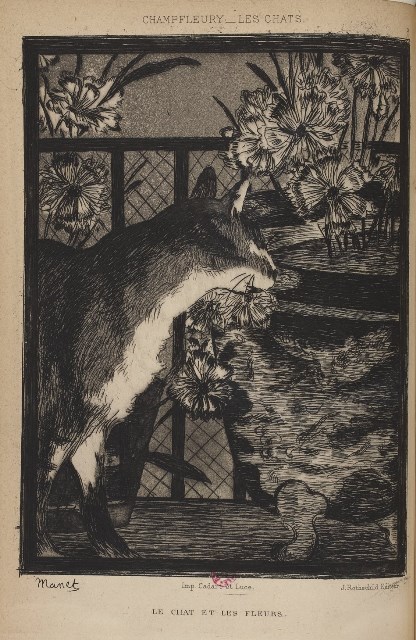 The book’s 23 short chapters (34 in the de luxe editions) and numerous appendices look at cats in ancient civilizations, popular traditions, heraldry, art and literature. There are also chapters on friends, enemies and painters of cats. It is profusely illustrated  with  full-page illustrations, decorated letters and vignettes, and several chapters have delightful tailpieces, several of them copied from a sheet of studies of cats  by Hiroshige (which Champfleury erroneously attributes to Hokusai). 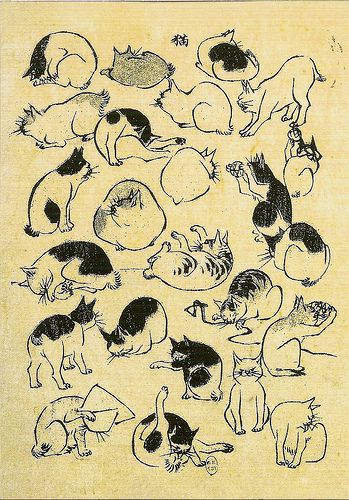 The frontispiece of the original 1868 edition is a drawing by the Swiss artist Gottfried Mind (1768-1814), ‘the Raphael of cats’, a nickname given to him (according to Champfleury) by Mme Vigée Lebrun.  Mind painted an infinite variety of cats and he would sit for hours drawing with a cat sitting on his lap and two or three kittens perched on his shoulders; a general massacre of cats in 1809 in his native Berne was the greatest tragedy of his life. Another Mind drawing in the text (below right) has the elegance and grace of a Matisse line drawing. 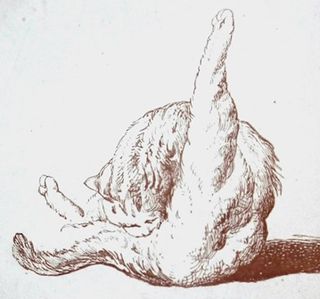 Images of cats by Gottfried Mind, frontispiece and p. 142 of the 1869 edition of Les Chats

Champfleury’s erudite interests are much in evidence in the book in the inclusion, for example, of two devices of the Sessa family of printers, active in Venice in the 16th century, showing a cat. 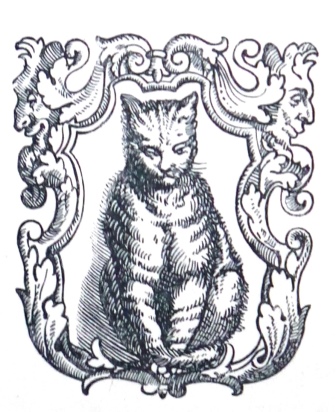 There are also examples of cats in heraldry, in legends and, above all, in popular prints. They include a 17th-century French woodcut showing a concert of cats in a fairground, their trainer surrounded by cats reading from scores headed ‘miaou’ and a Russian lubok colour print showing ‘The Mice  Burying the Cat’, a typical example of the world turned upside down. 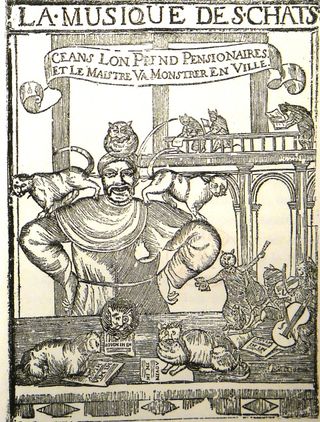 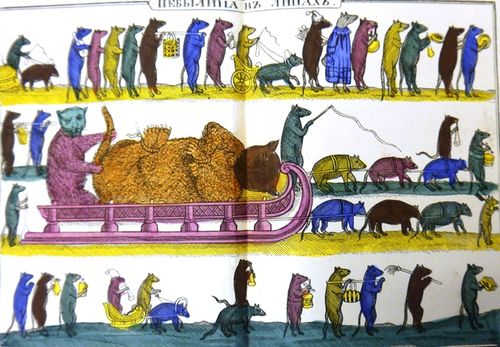 An impressive full-page Japanese print (below) showing  a composite head of a cat is another example of the author’s interest in Japanese art. 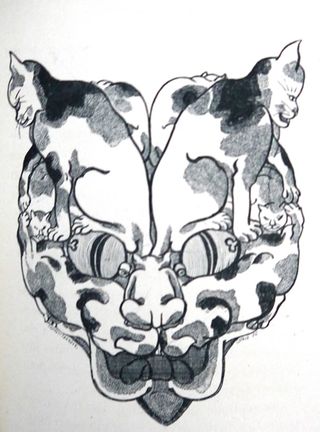 The numerous  portraits of writers and artists who were cat-lovers include Montaigne, Chateaubriand, Hoffmann and Baudelaire, but pride of place is given to Victor Hugo and his cat Chanoine. 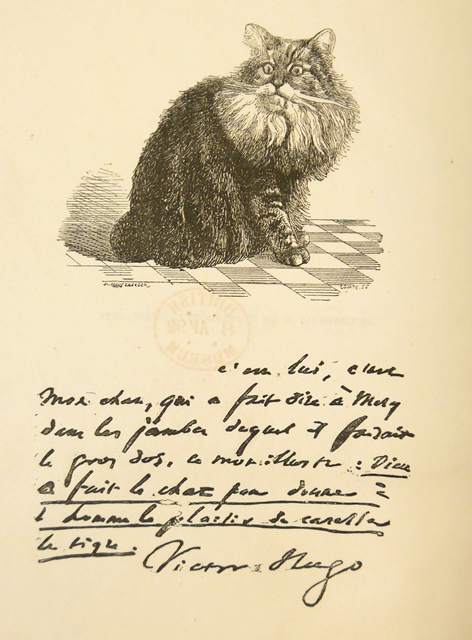 A vignette of Chanoine in the first edition became the frontispiece of the de luxe editions (above) with a note in Hugo’s hand quoting Joseph Méry’s dictum “God made the cat to give man the pleasure of stroking a tiger.” 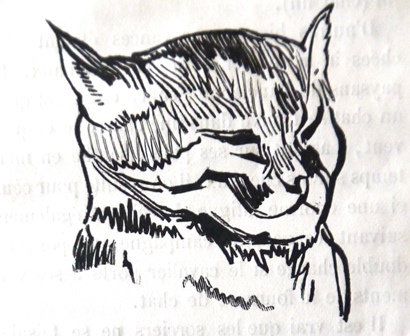 While a drawing of a cat by Delacroix (above) almost looks like a self portrait, cat’s ears are sprouting on Champfleury’s own head in the final illustration in the book, a humorous portrait of the author in his study, poring over a book about cats and observed by a cat perched on a bookcase behind him. 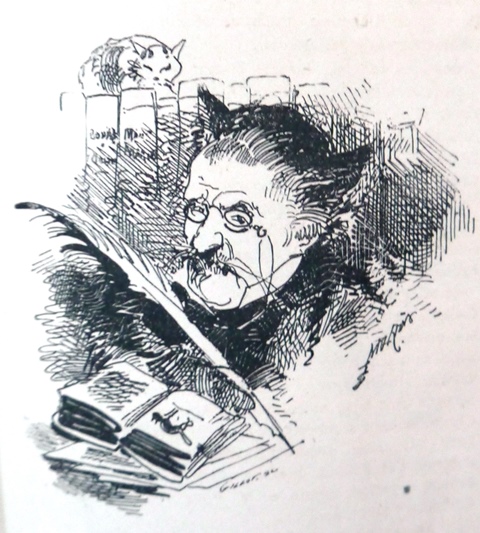