Who are the two most famous rabbits in British literature? Do I hear “Peter Rabbit”? Sure, Beatrix Potter’s mischievous rabbit in his blue coat is so famous, he features in our ‘Animal Tales’  exhibition that opened on the 6th of August. “The White Rabbit in Alice in Wonderland, by Lewis Carroll!” Absolutely, and what’s more,  it celebrates its 150 anniversary this year. (Watch this space for the Library’s commemorations) But there is a third famous little white rabbit who celebrates a big birthday in 2015. Born Dutch in 1955, as main character of a story told by the author/artist Dick Bruna to his son, ‘Nijntje’ appeared in the English language as ‘Miffy’. Miffy is known the world over, especially in Japan. She inspired ‘Hello Kitty’ and Japanese artist Atsuhiko Misawa  praises her as having the perfect form. He is one the 60 artists who made Miffy sculptures as part of the Miffy Art Parade. This major event takes place all over the world and is in support of UNICEF.

In the Netherlands celebrations concentrate in Amsterdam, The Hague and Utrecht, birthplace of Bruna. A row of six-foot tall Miffy statues graces the Museumplein in Amsterdam. 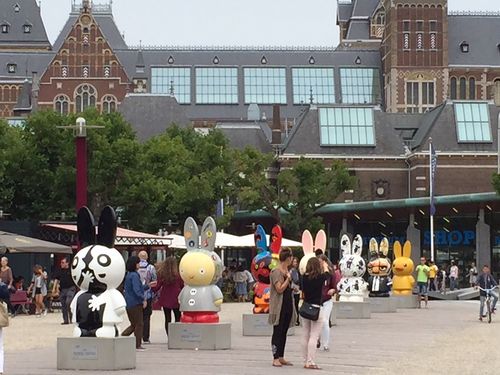 Above and below, sculptures from the Miffy 60 parade in Amsterdam  (Photos:  Marja Kingma) 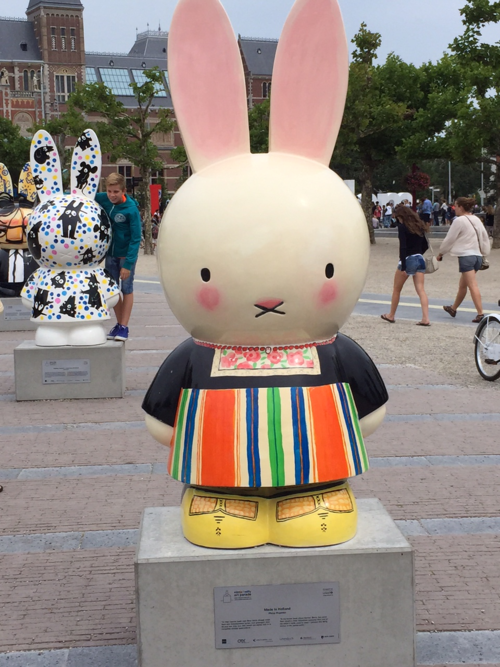 The Rijksmuseum has just opened an exhibition on Dick Bruna, who celebrated his 88th birthday on 23 August. It shows half a century of graphic art in international context.

The British Library holds most Miffy titles published in the UK since 1964, via legal deposit. There is a Welsh translation of one,  Miffi yn yr ysbyty (‘Miffy in Hospital’; X.990/23246), but no Dutch language ones! We normally do not purchase children’s literature from abroad, certainly not if an English edition is already available. Maybe an exception should be made on this occasion?