Joannes Stradanus and his Hunting Scenes

The Flemish artist Jan van der Straet, also known as Joannes Stradanus (1523- 1605), spent most of his working life in Florence where his enormous output included religious paintings, frescoes in the Palazzo Vecchio, tapestry cartoons, and also designs for various series of prints. 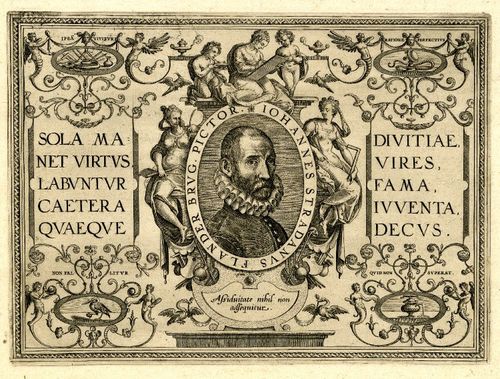 Between 1566 and 1577 Stradanus executed preparatory drawings for a series of hunting scenes  for tapestries to decorate the Medici villa at Poggio a Caiano near Florence. The success of these led Flemish publishers to commission  hunting scenes by Stradanus for engravings, an indication that the artist’s fame had by then spread north of the Alps. Six large-format engravings with scenes representing the tapestries at Poggio a Caiano were published by the renowned print publisher Hieronymus Cock in 1570, and in 1574 and 1576 Volxcken Diericx, Cock’s widow, published two series prints based on the same designs but without their ornamental borders. 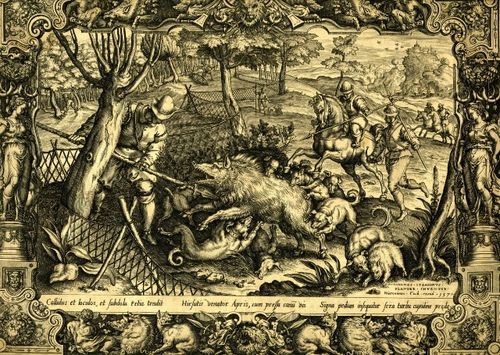 Stradanus had by then begun his collaboration with Philips Galle (1537-1612), another engraver and print dealer who had earlier worked in Cock’s workshop. This resulted in two new series of hunting scenes. The first, which numbered 44 prints, was published in 1578-80 and some 15 years later an additional 61 prints were produced, providing a greater variety of scenes. Both series were combined into a single collection  published in 1596 as Venationes, ferarum, arium, piscium [Hunts of wild animals, birds and fish]. Several engravers were engaged on this ambitious publication which was reprinted several times during the 17th century by Galle’s heirs. 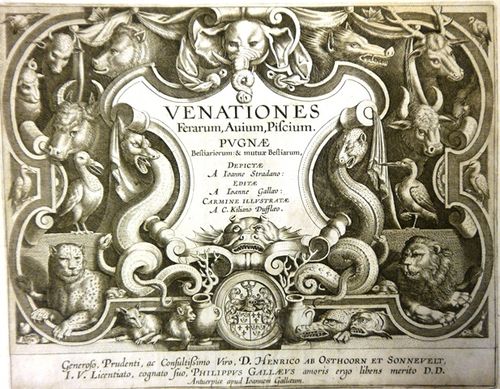 The British Library has two copies of the work, 1899.cc.71 and C.107.k.7. Both  have the same engraved title page, on which the name of Joannes Galle  has replaced that of  his father Philips, as it does on all the plates. This edition was first published in 1634 but as the date does not appear on the title page of either of our copies, perhaps they are later reissues. Judging by the quality of the plates, 1899.cc.71 is the earlier of the two. It is incomplete – a selection of 38 plates – whereas  C.107.k.7 has all 104 plates.

The prints are approximately 20 x 26.5 cm. They are grouped into thematically related depictions of animal and bird hunts, fishing, scenes from history or legend, fights between animals, or between wild animals and men in arenas. At the bottom of each picture there are verses explaining its subject. The examples below  give an idea of the great variety of subjects and their treatment, and of Stradanus’s inventiveness and exuberance. The landscapes, drawn following Flemish and Italian pictorial traditions, are a reminder both of the artist’s country of origin and of  his adopted country.

Scenes from history and legend 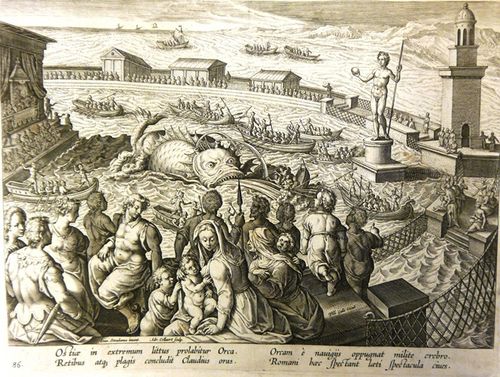 Whale Hunt by the Emperor Claudius at Ostia. Engraved by Adriaen Collaert [Plate 86]. Claudius fought a killer whale which was trapped in the harbour, an event witnessed by Pliny the Elder. The whale sinks a boat with a gush of water from its mouth. 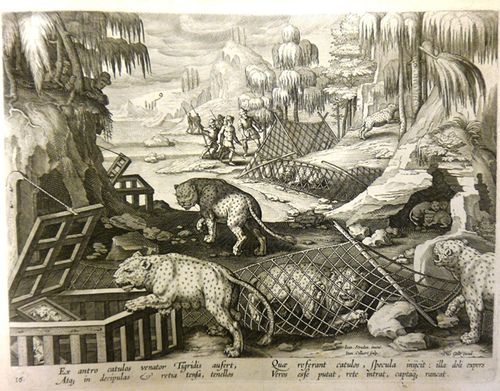 Hunting panthers using mirrors. Engraved by Jan Collaert II  [Plate 16]. In the foreground panthers are lured into traps which contain mirrors; on a wooded outcrop above, huntsmen wait to spring the traps; to right, other panthers are caught in nets; a group of hunstmen, with spears, approach along a riverbank. 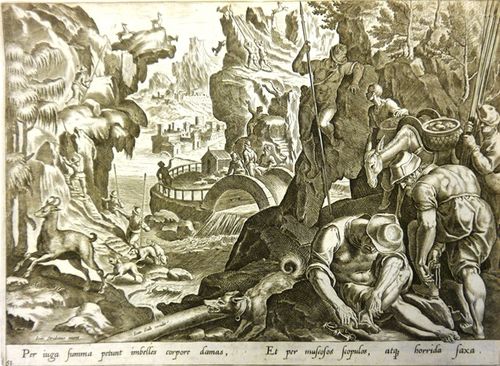 Gazelle hunt.  Engraved by  Joannes Galle [Plate 51]. One of the most spectacular engravings in the collection.  At right foreground a group of hunters are preparing for the hunt, two of them putting on their climbing shoes. At left mid-ground, hunters armed with spears, accompanied by dogs, chase gazelles up cliffs; on the opposite side of the ravine, men drive the gazelles off the cliff. 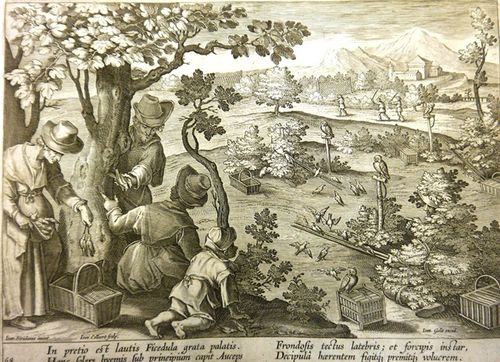 Hunting of reed warblers with owls. Engraved by Jan Collaert II [Plate 68]. Three owls perch on poles tethered with cords and a fourth stands on a cage. They attract the warblers which fly down to mock them. Lying on the ground are hunters camouflaged as bushes (their hands and faces can be seen) holding lime-twigs on which the birds land and become trapped. In the foreground, a couple is handing dead birds to an older woman who is putting them in a basket; a little boy observes the hunt. 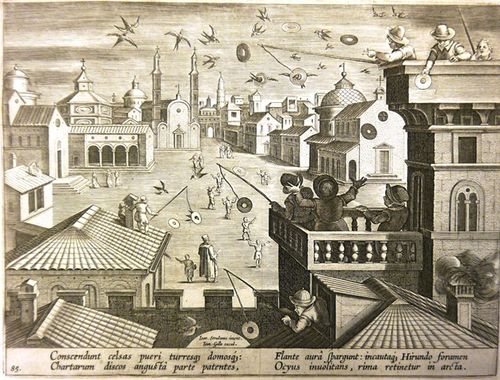 Catching swallows from rooftops using discs. Engraved by Joannes Galle [Plate 85]. One of the rare cityscapes in the series. In the foreground, boys catch swallows from the roofs and balconies of buildings using circular discs suspended from long sticks; groups of figures watch them from an Italianate square. 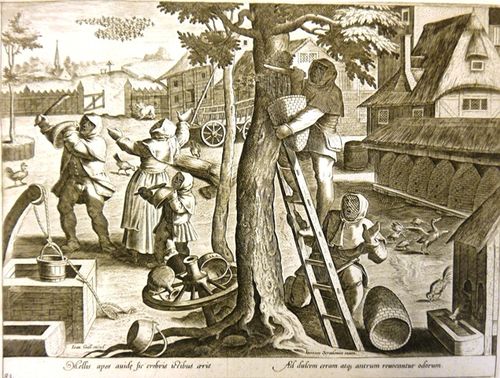 Beekeeping. Engraved by Joannes Galle [Plate 83]. Beekeeping is curiously included as an example of bird hunting. A man on a ladder scrapes bees from the trunk of a tree into a hive; another figure supports the base of the ladder; two figures beat pans with sticks , and a third watches a swarm of bees flying above. A row of hives can be seen to right.