Old Newspapers and a League of murderers in Stockholm

In a volume that was catalogued under the mysterious title A collection of 22 miscellaneous Russian periodicals, among single issues of various newspapers and magazines, such as Vestnik teatra (The Theatre Herald), Trudovaia mysl’ (Labour Thought), Vlast’ Sovetov (Soviets’ Power), Biulleten’ Khar’kovskoi gubernskoi pri Revkome Kommissii po obsledovaniiu zverstv uchinennykh Dobrarmiei (A Bulletin of  the Commission for investigation of atrocities committed by the Volunteer Army, attached to the Khar’kov regional Revolutionary Committee), Gornorabochii (The Miner), Krasnyi pakhar’ (The Red Ploughman), etc., I found  one issue of the Novoe Russkoe Ekho (New Russian Echo). The newspaper was published in Stockholm in both languages and had a parallel title in Swedish, Nya Ecco Rossiji: Rysk-Swvensk Tidning. 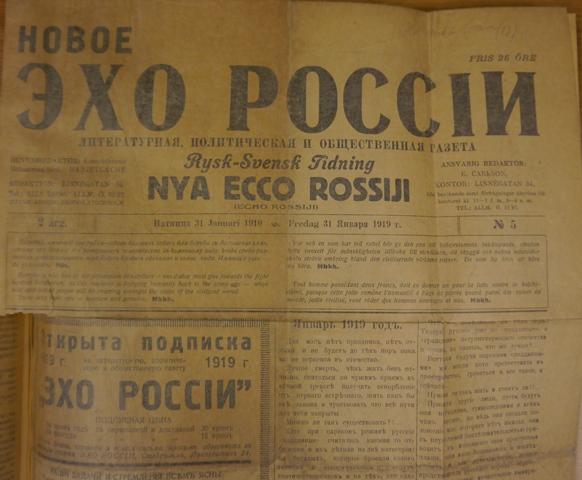 Most of the materials – emotionally engaged appeals or newsreels – were signed by M.B.Khadzhetlashe = M. B. Hadjetlaché (in English spelling: Hadjetlashe),  a Circassian  journalist, writer, and apparently MI6 (SIS) and Cheka agent.  It looks as if the entire issue was written almost single-handedly by Hadjetlashe, as other articles, short pieces and even poems are signed by ‘MBKh’, ‘Ia. Timochkin’ or ‘Leilin’ (which are quite likely to be his other pseudonyms). 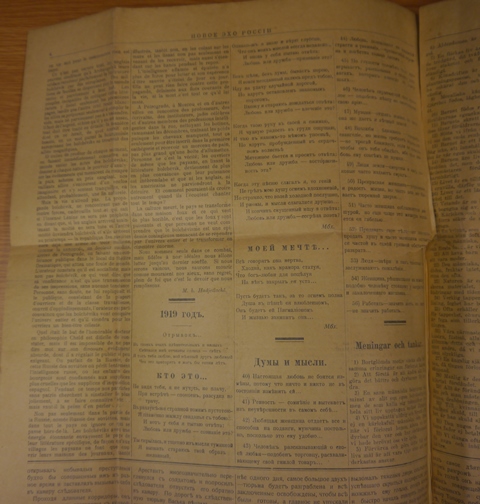 His name rang a bell, but only after some time did I realise that I had read about him in literature. Aleksei Tolstoy in his novel Emigranty (The Emigrants) made him a character under his real (?) name:

I’m warning you: you got into  bad company… If, for example, Khadzhet Lashe learns about this conversation, I won’t be surprised if he sends my dismembered body in a luggage compartment somewhere far away. There were similar cases… In Constantinople, we signed a paper… Later, when I’m very drunk, I’ll tell you this story … They are training us for something… I guess this is all about Stockholm… When Levant orders us to get ready, they will take us to Stockholm, and the main business will be happening there… Please note, I’m not complaining… You cannot do anything for me… Anyway, damn it… I’m warning you, be vigilant - Levant is a terrible man. And the other, Khadzhet Lashe, the master, is even more terrible.

This novel is a fictitious account of a real affair: the activities of a short-lived anti-Bolshevik terrorist organisation which kidnapped and killed people.  When the police discovered the gang in 1919, three murdered bodies were found in Lake Norrviken. It is not impossible that the entire organisation was set up with help from or at least with approval of the Soviets and was meant to be a huge provocation. Vatslav Vorovsky, in 1918-1919 head of the Bolshevik legation in Stockholm, immediately published a brochure V mire merzosti i  zapusteniia: Russkaia belogvardeiskaia liga ubiits v Stokgol’me (‘In the World of abomination and desolation: Russian White Guard League of murderers in Stockholm’ (Moscow, 1919) 8094.cc.10.(10.)). Tolstoy’s novel was published soon after.

Before the revolution Hadjetlashe had contributed to the well-known journal Syn Otechestva (‘Son of the Fatherland’), and some Muslim Russian language publications. The best known of his projects was the journal Musul’manin (A Muslim) published in Paris. He also wrote several popular novels, such as Zapiski nachal’nika tainoi turetskoi politsii (‘The Notes of the Head of the Turkish Secret Police’) available, curiously enough, from  AbeBooks in Swedish translation. Hadjetlashe’s biography is full of unverified facts, myths and rumours; a lot of his activities remain extremely controversial, despite the fact that his archive is held at the Bibliothèque de Documentation Internationale Contemporaine (Musée D’Histoire Contemporaine). Recently Olga Bessmertnaya, a Russian academic researching materials related to Hajetlashe’s life gave a conference paper  ‘What Else But Politics?’ about the  ‘Erratic Autobiography of a Steady Russian Impostor (late 19th-early 20th Centuries)’, which was devoted to Mohammed Hajetlashe(1870-1929).

Elena I. Campbell. The Muslim question and Russian Imperial governance.  (Bloomingtom,  2015). [Not yet shelfmarked]