In 1709 London found itself playing host to thousands of Germans who were fleeing famine, war and religious persecution in their native lands. Many of the first arrivals came from the Palatinate region, and the refugees became collectively known as the ‘poor Palatines’. 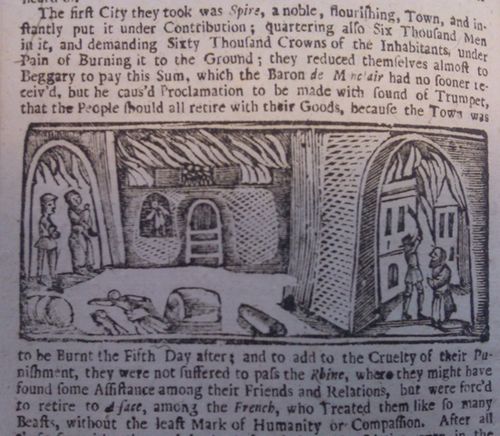 An account and depiction of the refugees’ sufferings in Germany, from The State of the Palatines for fifty years past to this present time… (London, 1710) British Library 9325.ccc.40.

Most of these ‘Palatines’ wanted to travel on to America rather than stay in Britain. Many hoped to emulate the success of Joshua Kocherthal, who had emigrated to America in 1708 with a group of fellow Germans, helped by grants of money and land from the British government. Kocherthal’s published description of Carolina, with an appended account of the financial aid his party had received, encouraged others to head for Britain, convinced that they would receive similar assistance towards a new life across the Atlantic. Instead, the majority ended up housed in temporary camps on Blackheath and in Camberwell. 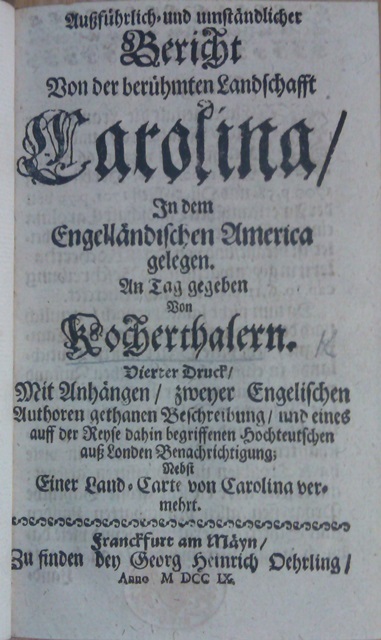 The Palatines’ motives for seeking refuge, their worthiness of help and their eventual fate, were the subject of much debate. Queen Anne and her government had indeed initially offered help and support to those perceived as Protestant refugees fleeing oppression by Catholic rulers, but by no means all those arriving in Britain fell into this category, and soon critics were pointing out that some had come from Protestant-ruled states and others were themselves Catholics (although most of the latter were offered a choice between conversion or repatriation). Whatever the reasons for their flight, the refugees were in any case soon arriving in too large numbers for the state to be able to provide for them, let alone pay for all of them to travel and settle in America. 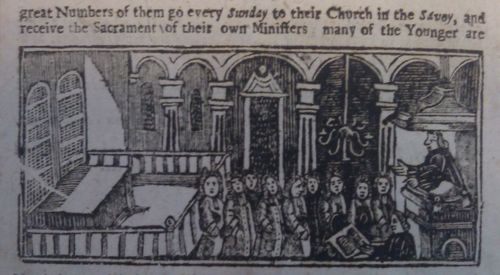 (Protestant) Palatine refugees worshipping in the Savoy Chapel, from The State of the Palatines

Concerns were also expressed about the threat the refugees might pose if allowed to remain in Britain. Many were poor and unskilled labourers and it was argued that they would add nothing to the nation’s prosperity but instead reduce work and wages for their British counterparts. One vocal supporter of the Palatines’ right to remain was Daniel Defoe, whose political periodical A Review of the State of the Nation argued that British tradesmen and labourers had nothing to fear and that the newcomers would enhance rather than damage the ‘publick Wealth’. He also recommended settling the Palatines in sparsely-inhabited regions to develop the land for agriculture. But other voices were less welcoming.

A contemporary pamphlet, The Palatines Catechism, sets out some typical elements of the debate in a fictional dialogue between an ‘English tradesman’ and a ‘High-Dutchman’ (probably himself a German in modern parlance). Visiting the refugees’ camp, the ‘High-Dutchman’ admires their ‘Diligence and Industry’ and argues that Christian charity demands they should be supported and helped to settle in Britain. The Englishman sees only disorder and outlandish habits in the camp and is suspicious of the Palatines’ motives for coming; he declares that, ‘charity ought to begin at home,’ and that Britain should help her own numerous poor before taking in those of other countries. He also fears that, if the Palatines are given assistance, they will repay it by exploiting their benefactors once they are settled. Ironically, this fictional debate, like many of the real ones, ignored the fact that most of the refugees had no desire to remain in Britain. 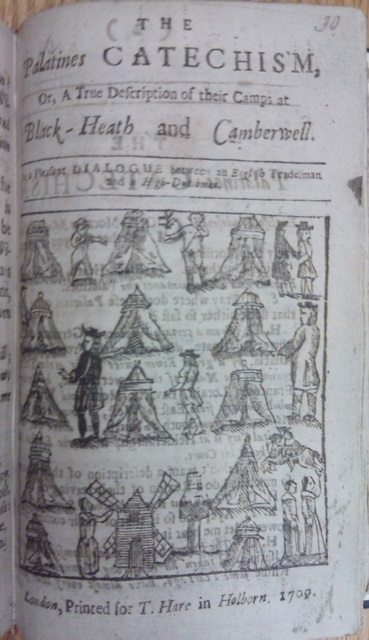 Eventually some 3,000 Palatines were granted the longed-for passage to America, although their new life there as indentured workers was not exactly the future they had imagined. Other groups were settled elsewhere in the British Isles, including over 2,000 sent to Ireland. In the autumn of 1709 a new government banned further shiploads of German immigrants from coming to Britain, and in the following months those that remained in the camps gradually dispersed. Some found their way independently to new homes in Britain or America, but others gave up their hope of a better life in a new country and returned at last to Germany.

The Palatines’ Catechism, or a true description of their camps at Blackheath and Camberwell. In a pleasant dialogue between an English tradesman and a High-Dutchman (London, 1709). 1076.l.22.