History Written by the Victors, Poetry by the Losers? Charles d’Orléans, the Prisoner-Poet of Agincourt

25th October 2015 marks the 600th anniversary of the Battle of Agincourt, one of the most celebrated British military victories. The struggle between the armies of Henry V of England and Charles VI of France, in which, according to the French eye-witness Jean de Wavrin’s statement, ‘the French were six times more numerous than the English’, immediately captured the imagination of chroniclers in both prose and verse, and was commemorated in the famous Agincourt Hymn Deo gratias, Anglia which was sung as Henry, bare-headed and on foot, made his triumphal entry into London, as well as in the ballad The Bataille of Agincourt, attributed to John Lydgate. Most famously of all, it inspired Shakespeare’s Henry V, familiar not only through countless stage performances but through two notable films in which Laurence Olivier (1944)  and Kenneth Branagh (1989) portrayed the young warrior king. The play’s message of chivalry and the English fighting spirit which won out against tremendous odds lent itself to the climate of Britain in the closing years of the Second World War but also to a more generous and impartial perspective in the later version with its emphasis on the sufferings of war.

The saying of Walter Benjamin that ‘history is written by the victors’ might therefore seem to apply to poetry and drama too, but is far from the truth in this case. Not only were there notable accounts of the battle from the French side, including those by Enguerrand de Monstrelet (c. 1400-1453) of which the British Library holds a first printed edition from around the beginning of the 16th century  illustrated with numerous wood engravings. 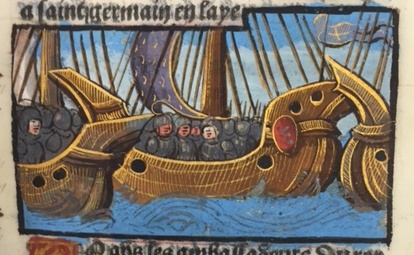 One of the outstanding poets of his age, who actually appears in Shakespeare’s play, was also one of the hostages of war and spent 21 years in captivity in England. Charles d’Orléans (24 November 1394–5 January 1465) succeeded to the dukedom of Orléans at the age of 13 after the murder of his father Louis I on the orders of John the Fearless, Duke of Burgundy. His mother Valentina, the daughter of Gian Galeazzo Visconti, Duke of Milan, did not long survive this loss, and in the early years of his reign Bernard VIII, Count of Armagnac, the father of his second wife Bonne (Bona) was a strong influence, which led to his followers being known as Armagnacs. When the battle lines were drawn up on St. Crispin’s Day 1415 the newly-knighted Duke was placed in the front line, but although he survived the conflict he, together with the Duke of Bourbon, Marshal Boucicaut and the Counts of Richemont, Eu and Vendôme, was among the 1,500-1,600 noble prisoners captured by the English. Their impressive but cumbersome armour made it difficult to move quickly in hand-to-hand combat, and Charles was discovered alive but immobilized under a pile of corpses (the Earl of Suffolk was less fortunate, and suffocated in similar circumstances). 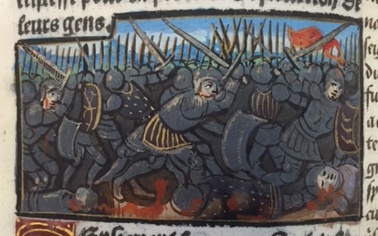 The prisoners were transported to England in the hope that their kinsmen would ransom them, but in Charles’s case this would not happen until 1440. A cynic might conclude that his countrymen were in no hurry to have him back, but in fact Henry had placed a specific embargo on his release, fearing that as the natural head of the Armagnac faction he would represent a source of danger. Finally, having received an undertaking that Charles would not seek vengeance for his father’s assassination, Philip the Good, the current Duke of Burgundy, arranged for his release. 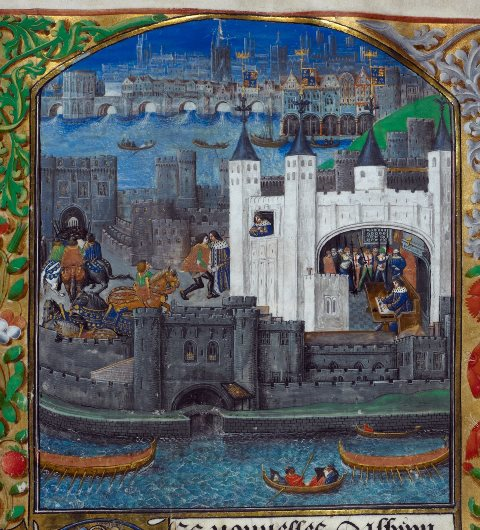 Charles d’Orleans in captivity at the Tower of London, from a manuscript collection of his poetry, BL Royal MS 16 F II, f. 73

Charles had not been idle during his captivity. He was kept on the move from one fortress to another, including the Tower of London; in an uncanny reprise he spent part of his imprisonment in Pontefract Castle like Richard II, whose child widow Isabella of Valois had been Charles’s first wife. By the time he was returned to France, the English chronicler Holinshed observed that he spoke better English than French, which equipped him to write over 500 poems in both languages. The British Library holds an illuminated manuscript of these (Royal MS 16 F II), and also a volume of those in English at C.101.a.38, ‘first printed from the manuscript [i.e.  Harley MS 682] of the library in the British Museum’ in 1827 by George Watson Taylor, which contains a autograph letter by the editor presenting it to the Museum. 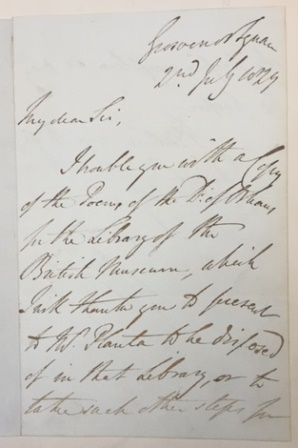 George Watson Taylor’s letter presenting his book to the British Museum Library, from Poems, written in English, by Charles, Duke of Orleans, during his captivity in England, after the battle of Azincourt. With an introductory notice by G. W. Taylor. (London, 1827) C.101.a.38]

The poems in both languages bemoan the pains of captivity and of courtly love in the ballade and rondeau forms. They attracted several musical settings, including a group of three by Claude Debussy and another by Edward Elgar. The Duke’s colourful life also inspired a historical novel by the Dutch author Hella S. Haasse, Het Woud der verwachting (1949).

Once liberated, Charles returned to France, was joyfully welcomed by the people of Orleans, and embarked on a third marriage to Marie of Cleves which produced three children, including the future King Louis XII. His Italian ancestry led him to press a claim to Asti, but without any real conviction, and he lived out the rest of his life as a Knight of the Golden Fleece and, fittingly, as a generous patron of the arts. His library had been saved by Yolande of Aragon and was awaiting him on his return, and, like another creation of the dramatist who had put him on stage, Shakespeare’s Prospero, he might well have remarked,  ‘… my library was Dukedom large enough’.

Posted by Olga Kerziouk at 2:51 PM