On this day in 1956 a peaceful demonstration organised by students took place in the Hungarian capital, demanding reforms of the oppressive communist regime. Soon broad sections of the population joined the cause, and soon the rattle of gunfire and the clatter of tanks resounded in the streets of Budapest and other cities. 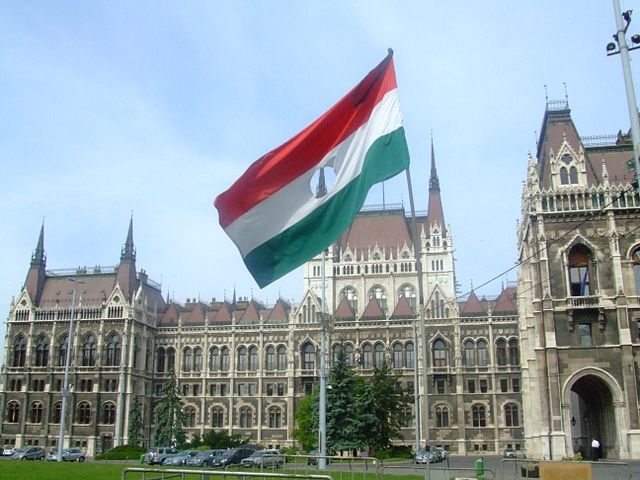 A flag with a hole on the 1956 monument outside the building of Parliament in Budapest. Communist insignia were torn or cut from flags during the October 23 demonstrations, an iconic image from the days of the Revolution. (Image by Ian Pitchford. Licensed under CC BY-SA 3.0 From Wikimedia Commons)

The Revolution only lasted for 13 days, until 4th November, yet it became a symbol of fearless defiance against dictatorship behind the Iron Curtain. In a few days, Hungarians achieved what could only be dreamt of for many years beforehand. On the first evening Stalin’s six-tonne statue was toppled, with only his boots left on the pedestal.

Four days later a new, democratic government was formed by the reformist Imre Nagy, and without much delay negotiations started about the withdrawal of Soviet troops. The secret police was disbanded, political prisoners were freed, previously banned political parties were allowed to reorganise and preparations were started to hold free elections. The fact that Hungary was also determined to leave the Warsaw Pact and declare its neutrality hastened the tragic end of the Revolution. The Soviets responded with resolute ruthlessness, as it was not in their nature to stand by and watch one of their satellites leave orbit and create a gaping hole in the buffer zone towards the West. 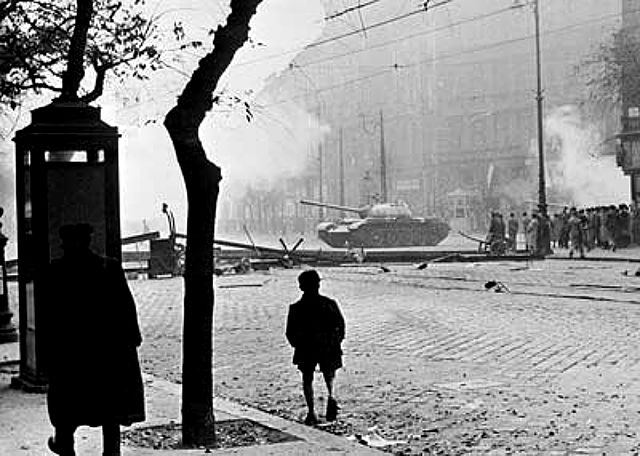 Soviet tank in Budapest, 1956. (Image by the CIA (PD). From Wikimedia Commons)

The British Library holds a substantial collection relating to the 1956 Hungarian Revolution, a wealth of resources for academic or personal research. Collecting started shortly after the first refugees arrived in Great Britain. Almost 200,000 had fled their homeland and were given asylum in 35 countries worldwide after the brutal crushing of the Revolution. The earliest items received were leaflets and manifestos:

Some of these are quite rare as even the possession of such ‘incendiary’ items was prohibited for over three decades. 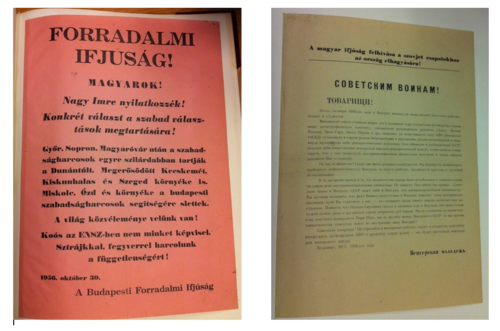 Left, a flyer demanding free elections and calling to arms and strikes to gain independence. Right, an open letter to Soviet troops, in Russian, saying they were deceived when given orders to fight fascists in Hungary and that they should not shoot at demonstrators but withdraw. Cup.401.i.10.

Other sources include post-1989 publications of secret police archives, minutes of Communist party leadership sessions in 1956-1957, and documents from the British Foreign Office. It is also interesting to explore the domestic and international press coverage of the revolt, both in contemporary newspapers and compilations published retrospectively. The latter come partly from radio broadcasts including those by the BBC and Radio Free Europe. The Revolution generated a broad spectrum of sympathetic reactions in world politics and foreign public opinion, from neighbouring Yugoslavia to India, and from the International Commission of Jurists in The Hague to the United Nations in New York. Inside Hungary, however, it was too little too late for those supporting views or reports to have any real effect. On 4th November Soviet tanks returned and power was restored to the Moscow-backed faction, who methodically rounded up participants still in the country and had them condemned to lengthy imprisonment or death. One of those executed was Prime Minister Imre Nagy. 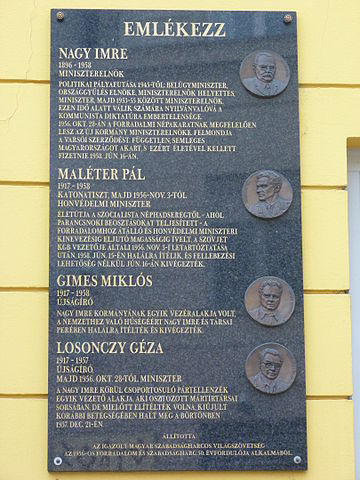 Plaque in Budapest to commemorate Imre Nagy and his associates. With the exception of G. Losonczy, who died in prison earlier, they were hanged and buried in an unmarked grave in 1958. (Image by Andor Derzsi Elekes. Licensed under CC BY-SA 3.0. From Wikimedia Commons)

Key figures of the Revolution are the subject of many works, as are its lesser-known martyrs, and the victims of reprisals. Documents of secret trials and protracted systematic revenge have largely been brought to light by now.

In an attempt to recalibrate people’s minds and to discourage any notion of opposition, the propaganda machine was also put to work. Amongst its copious output were the so-called ‘white books’, in which the communist puppet government painted its own version of events, denouncing the uprising as counter-revolutionary and criminal. These unassuming-looking booklets were translated into several languages to ensure that the endorsed account was accessible to foreign audiences as well. In addition to the Hungarian original we also have the English and Russian editions in our collection.

The legacy of 1956 was kept alive by émigré circles in the West, who published tirelessly and had clandestine support links to the dissenter movements growing from the early 1970s back home. Beside theoretical and commemorative writings, the literary heritage of both groups testifies to the immense impact the Revolution made on people’s lives.

Numerous survivors have had their diaries or memoirs printed, imparting some truly poignant stories. 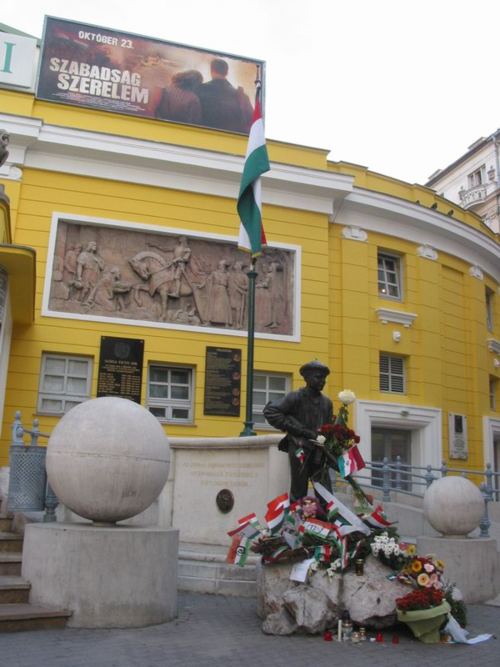 Memorial to a young freedom fighter in Budapest’s Corvin köz, one of the hubs of armed resistance. Many teenagers were among the active participants in clashes against the Soviet Red Army. Image by Andreas Poeschek. Licensed under CC BY-SA 2.0. From Wikimedia Commons