I beg to apply for a ticket: Lenin at the British Library

The founder of the world’s first socialist state, Vladimir Il'ich Lenin, visited London six times between 1902 and 1911, and on at least five of these occasions found the time to call into the British Museum whose Library collections were in his view unparalleled. At the time of his 1907 visit he said:

It is a remarkable institution, especially that exceptional reference section. Ask them any question, and in the very shortest space of time they'll tell you where to look to find the material that interests you. ... Let me tell you, there is no better library than the British Museum. Here there are fewer gaps in the collections than in any other library.

Praise indeed from a man who was already well acquainted with many of the major libraries of Europe and Russia.

His attachment to the Library dates from 29 April 1902, when he first entered the Round Reading Room to commence his studies. He had arrived in London with his wife, Nadezhda Konstantinovna Krupskaia, earlier that month in order to set up publication of Iskra, the newspaper of the Russian Social Democratic Labour Party (RSDLP). The Twentieth Century Press had agreed to carry out the printing at 37a Clerkenwell Green, (now the Marx Memorial Library), and soon accommodation was found for the new arrivals not far from there, at 30 Holford Square, Pentonville.

It was from this address that Lenin first wrote to the Director of the British Museum requesting permission to study in the Library. The documents related to this episode are held in the British Library (Add. MS.54579.) 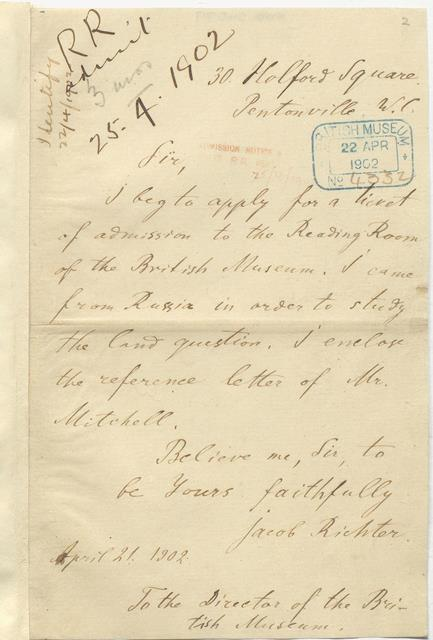 The letter (above), dated 21 April 1902, bears the signature “Jacob Richter”, the pseudonym Lenin had adopted to throw the Tsarist police off his track. The reference required  was supplied by the General Secretary of the General Federation of Trade Unions, I. H. Mitchell, but this did not satisfy the Admissions Office as Mitchell’s home address could not be found in the London street directories. Lenin wrote again enclosing another recommendation from Mitchell, who this time used the address of his union’s headquarters. The following day Lenin was informed that a Reader’s Ticket would be granted to him, and four days later he signed the Admissions Register and was issued with ticket number A72453 (below). 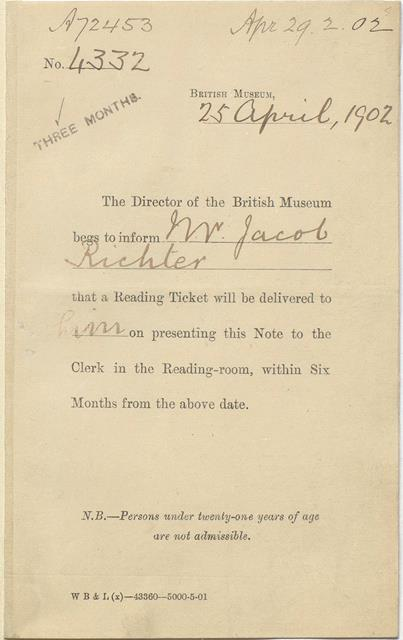 The ticket was valid for three months only, but the period was extended, first by three months, and then by a further six . Finally, on 29 April 1903, exactly one year after entering the Library for the first time, he surrendered his ticket and a few days later left England for France.

In August of the same year he returned for the famous 2nd Party Congress, during which the RSDLP made its historic split into “menshevik” and  “bolshevik”  factions, but there is no evidence to suggest that Lenin found the time to visit the Museum on this occasion, despite the fact that he said he used the Library whenever he was in London.

However, during the 3rd Party Congress, which again took place in London (from 25 April to 10 May 1905), it is known that he paid a visit to Great Russell Street, and there copied out extracts from the works of Marx and Engels. Unfortunately, there is no record of this in the Museum archives.

His next visit to London took place in early summer 1907, and from the reminiscences of his colleagues we know that he spent roughly a week in the Library at the beginning of June. The Temporary Admissions Register does mention that a J. P. Richter was admitted in May 1907 (no.3782), but one cannot be sure whether this was Lenin – Richter was not a particularly uncommon name. However, we can be quite sure about the details of his visit the following year. In mid-May 1908 he arrived in London with the express intention of spending a month in the Museum to work on his book, Materializm i empiriokrititsizm, and fortunately, his correspondence with the Museum authorities survives in the Library archives.

On 18 May 1908 under his real name, Vladimir Oulianoff, he wrote to the Director of the Museum requesting permission to study in the Library and referring to an earlier donation of two of his books. His recommendation came from a certain J. J. Terrett, an English Social Democrat, but history repeated itself, and just as in 1902, he was refused  admission. Two days later he wrote again enclosing a second reference, this time from his old friend, the manager of the Twentieth Century Press, Harry Quelch. This proved sufficient, and as in 1902, he immediately received instructions to call into the Library to collect his Reader's Ticket. On 22 May, he signed the Admissions Book, and was issued with a three-month pass, number A88740.

Lenin made use of the Library's collections only once more, during his lecture-tour of 1911, when he visited several European cities to deliver his paper on “Stolypin and Revolution”. The London reading took place on 11 November in the New King's Hall, Commercial Road, Whitechapel, and on the same day the Museum issued a temporary pass to Mr. Vladimir Oulianoff, making a note of his address, 6 Oakley Square, N.W., in their Card Index.

Although Lenin may indeed have had a favourite seat in the Reading Room, neither he nor anyone else has left any indication of which seat that may have been. Several numbers have been suggested, including: G7, H9, R7, R8, and L13. In fact, the latter is probably the most likely, positioned, as it was then in a row opposite the reference works on British and European history, which he doubtless made use of on several occasions.