The ‘Esbatement moral des animaux’ : a 16th century French adaptation of Aesopian fables and their illustration

The current Animal Tales exhibition includes a copy of the Esbatement moral, Des animaux (British Library C.125.d.23), an anonymous French verse adaptation of Aesop’s fables in sonnet form. It was published in Antwerp in 1578 by the engraver Philippe Galle (1537-1612). Little can be inferred about the identity of the anonymous author, who claims to be ‘tout nouveau en la langue Françoise’, apart from the dedication to Charles de Croÿ and his connections with Philippe Galle himself  and Pierre Heyns, writer of the verse preface, and part of the community of Antwerp humanists. Heyns’s preface refers to ‘des Heroiques vers / En Sonets bien troussez... / A Londres entonnez et finiz en Anvers’, pointing to a cultural relation between Flanders and England, which is also relevant to the illustrator, Marcus Gheeraerts the Elder. 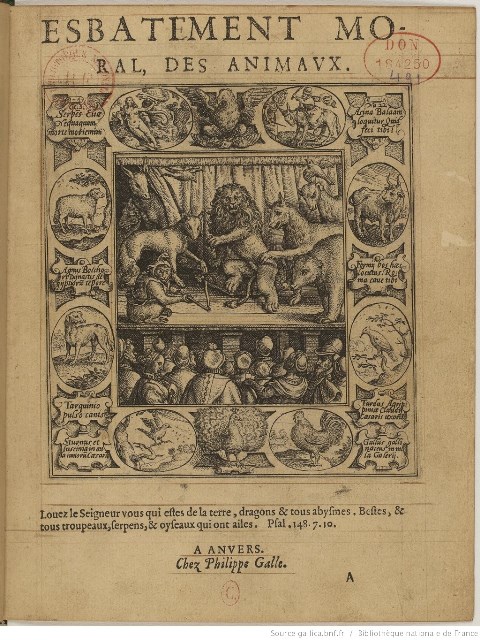 This work shows the interest in Aesopian fables within Flemish humanistic circles in the Renaissance. It expresses the desire to combine classical wisdom with the Christian message, using text and images to support this didactic purpose.

The title of the collection, ‘Esbatement moral’, or ‘moral entertainment’, covers the double ambition of the fables, docere et placere, to instruct and to please. Staging animals to represent human behaviours, foibles and virtues, is part of the appeal of these short didactic tales. The preface immediately plays on this double register, as man is characterised first by religion and second by the Aristotelian category of animal rationabile, as opposed to that of bestia. Interestingly, no reference is made to Aesop, either in the title or in the introduction: at the bottom of the frontispiece, a quotation from Psalm 148 exhorts animals to praise the Lord. The purpose of the book is clearly the didactic dissemination of a Christian moral.

The frontispiece shows animals on a theatrical stage in front of a curtain while men and women are attending the performance. Although the animals are represented in a naturalistic manner, the cushion used as seat by the lion, king of the animals and the fool’s outfit worn by the monkey contribute to their anthropomorphism. Animals are privileged actors on the stage of the theatrum mundi: a century later, Jean de La Fontaine presents his collection of fables as ‘Une ample comédie à cent actes divers, / Et dont la scène est l’univers’ (Fables, V, 1, 1668).

Around the central illustration, medallions containing portraits of individual animals are interspersed with Latin inscriptions allowing the reader to identify the protagonists of specific biblical or classical stories (Eve and the serpent, Balaam’s ass, the speaking dog of Tarquin the Proud...). This sets up a biblical and classical cultural horizon for this collection of fables, even if the core language of the collection is not Latin but French. 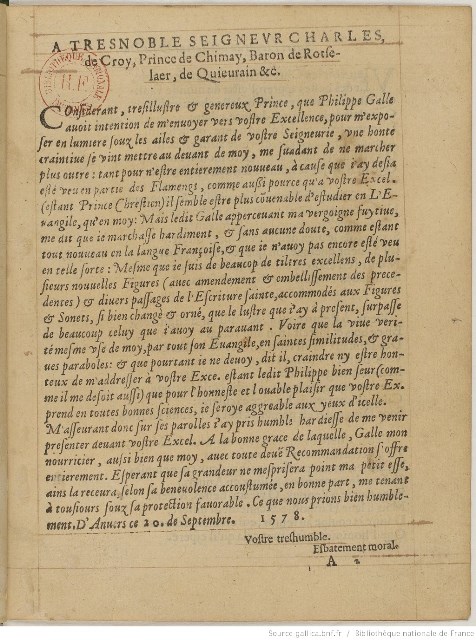 Dedication of the Esbatement moral des animaux, f. A2.

The Esbatement is dedicated to Charles III de Croÿ, prince de Chimay (1560-1612), a keen collector of books and artworks. The author highlights his religious and educational purpose: in his dedication, the expected association of fables with oral tales and classical fiction, gives way to references to the Gospel and the Holy Writ, mentioning ‘figures’, ‘similitudes’ and ‘paraboles’ as means to access the truth, ‘vive verite’.

The Aesopian sonnets are introduced by Pierre Heyns (1537-1598), who wrote and translated several didactic and pedagogical works. His  preface is directed to the ‘Spectateur et Lecteur’, highlighting the essential combination of the visual and textual aspects of the book. 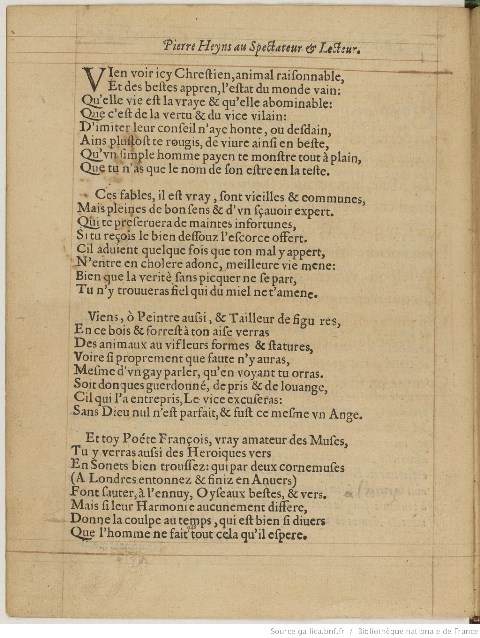 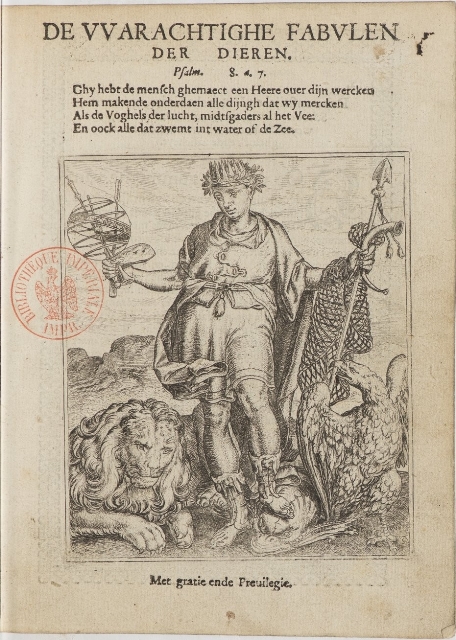 The artist, Marcus Gheeraerts the Elder, had illustrated a collection of Aesopian fables, De warachtighe fabulen der dieren (‘True animal fables’), translated into Dutch by Edewaerd de Dene (British Library 640.l.22 is a collection of engravings from this edition). The Dutch edition has a different frontispiece (above) and is introduced by the engraver and printer Hubert Goltz.

A preface to De warachtighe fabulen… by Lucas d’Heere, a Flemish painter, poet and writer was used as model for Pierre Heyns’s foreword to the French edition. The 1578 Esbatement des animaux also reused 107 etchings from this edition, with 18 additional illustrations, also by Gheeraerts. 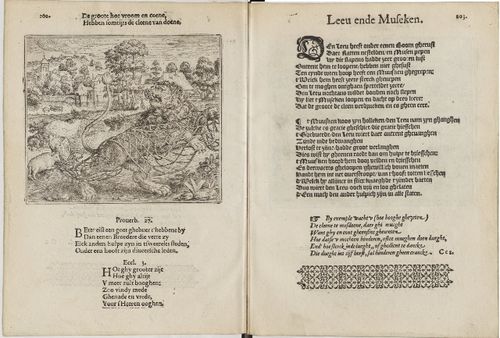 In the Flemish copy (above), the illustration of ‘The Lion and the Mouse’ features on the left page, preceded by a motto and followed by two Bible quotations: one from Proverbs 27, and the other from Ecclesiastes 3 (the choice of quotations in the French version is different). The Dutch fable is also versified, but in alexandrines, and is longer. The moral is set distinctively from the narration by the use of an indented paragraph and of italics, and it is preceded by a pointing hand, a manicula. French version of  ‘The Lion and the Mouse’, from Esbatement moral des animaux, ff. 11v-12.

In ‘Du Lion et le Rat’, the verse fable, placed on the left page, faces an etching on the right page, framed by a devise on top (‘Chascun peut faire recompense’) and a Bible quotation at the bottom (Ecclus. 12:1,2). In the illustration of ‘the Lion and the Mouse’, the lion is depicted with a lot of movement and vivacity, at the forefront of the image: he is trying to untangle himself from the net wrapped around him. He stands on his back legs, tail up, head contorted and expressing anguish, with an open jaw which reveals his tongue and teeth, and an aggrieved look. His confusion contrasts with the calm of the mouse in the bottom left of the image, who starts biting into the thread.

The sonnets follow the rhyme scheme set up by the French poet Clément Marot (1496-1544): two quatrains of alexandrines in enclosed rhymes (abba) followed by a couplet (cc) and a last quatrain of enclosed rhymes (deed). However, visually and syntactically, the poem appears as a sequence of two quatrains and two tercets, in the tradition of the Italian or Petrarchan sonnet. The last tercet is an ideal location for the moral of the fable, which echoes the two sentential statements on the facing page.

This collection of Aesopian fables in French can appeal to different kinds of audience: readers will enjoy this poetical rewriting of the fables in the short sonnet form, but the author first puts the emphasis on the moral and Christian instruction they provide, along with the lively illustrations which will appeal to both younger and older readers.