From Poetry to Songs: Hare, Rabbit and Sirens in Apollinaire’s Bestiary

Guillaume Apollinaire (1880-1918) moved to Paris and started publishing poems, articles and art reviews in the 1900s. He was close to artists like Pablo Picasso, André Derain, Maurice de Vlaminck or le Douanier Rousseau. In 1911, he published a deluxe edition of his Bestiaire, in 120 copies, composed of 30 poems illustrated with engravings by Raoul Dufy. 18 of these poems had previously appeared in 1908 in the journal La Phalange, under the title ‘La marchande des quatre saisons ou le Bestiaire mondain’.

Mediaeval interest in bestiaries often resided less in the naturalistic and physical descriptions of the animals and their behaviour, often fanciful, than on their symbolic and allegorical level. Although Apollinaire does not put the emphasis on the didactic aspect of the bestiary, his work is infused with both Classical and Biblical or religious references. The poet, who chose his pseudonym after Apollo, God of Music and Poetry, gave his 1911 Bestiary, the subtitle ‘Cortege d’Orphée’. The collection of poems is introduced and guided by the character of Orpheus, emblem of the poet himself, who addresses directly the reader, drawing his attention to the text, the images, and the animals, in four poems introducing and accompanying the collection. The poet plays on the concept of the animal series and on the combination of text and engravings. He accentuates the brevity of each entry, as each poem is only formed of a quatrain. 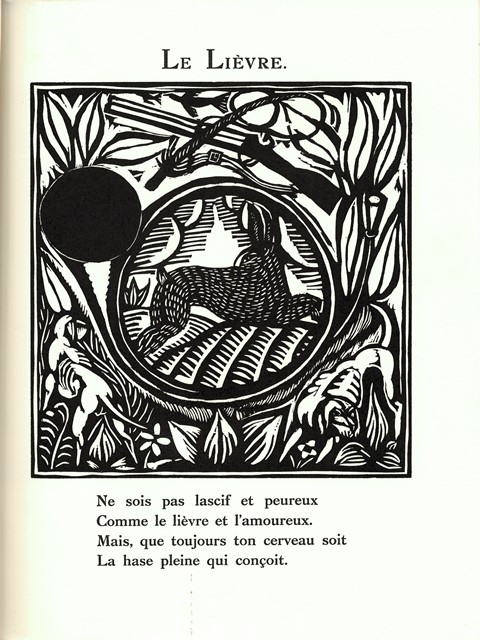 In medieval bestiaries, and at least since Isidore of Seville, the hare is characterised by its velocity, associated with timidity and fearfulness, while the rabbit is known both for its fertility and the fact that it is hunted by dogs. In Raoul Dufy’s engraving, a hare bouncing in an open field appears encircled in a medallion formed by a horn, while the frame is completed with gun and whip and with two hunting dogs. In Apollinaire’s poem, both the hare and the rabbit are associated with love, sexual intercourse and fertility. The poem is formulated as an advice to the reader, who should not be like the hare and the lover, both ‘lascif[s] et peureux’, but should aim to reach the fertility and productivity of the doe, transposed in the field of imagination and intellectual creativity: ‘Mais que toujours ton cerveau soit / La hase pleine qui concoit’.

As for the rabbit, it is presented by Apollinaire as a symbol for the beloved, and the archaic or literary use of the French word  ‘connin’ for rabbit, reminds us of the medieval association of the animal with the female organ (‘con’), in the context of the love chase, an aspect often playfully illustrated in manuscript marginalia (as in this example). 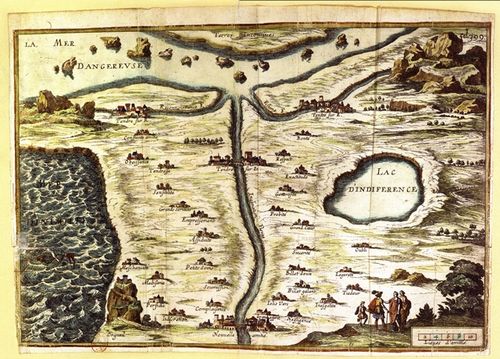 The use of allegory in the bestiary is reinforced in ‘Le Lapin’ by Apollinaire’s reference to the 17th century engraving of the ‘Carte du Tendre’. In La Clélie, a romantic novel by Madame de Scudéry, this allegorical map provides a topographical representation of the country or journey of love with all its delights and pitfalls. In the 1911 Bestiaire, Dufy’s engraving shows the rabbit in front of a peaceful hilly countryside with plants and trees and a church in the background (below). 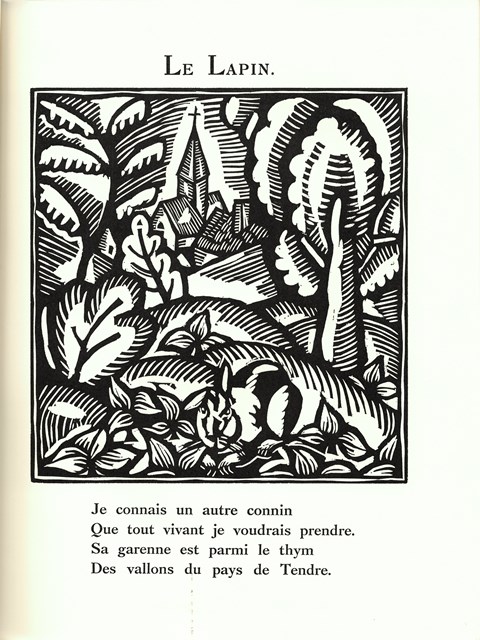 The only imaginary creature retained by Apollinaire is the siren, actually presented as a group: ‘les Sirènes’. They are preceded by a representation of Orpheus accompanied by a warning against flying Sirens (‘volantes Sirènes’, ‘oiseaux maudits’) and their deadly songs. In antiquity, they were half women half birds, reputed to charm sailors with their songs and lull them into sleep before killing them, but in the middle ages, sirens also started to be depicted and pictured as women with a fish tail. 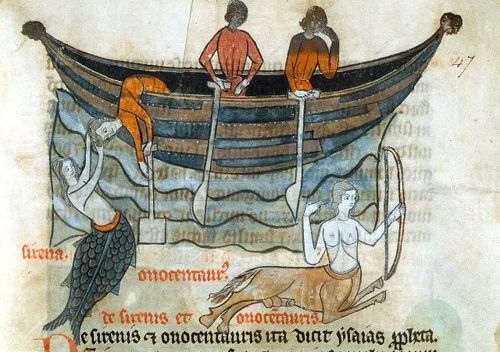 The chant of Apollinaire’s Sirens can be contrasted with that of the poet, whose love and song has the power to raise Eurydice from the dead, or that of the pure and sexless angels in Paradise.  In both the Orpheus and the Sirens’ engravings, the sirens bear female heads and breasts, but also wings and lion arms, their body ending in a tripartite fish tail in the second engraving. This maritime aspect is highlighted in the corresponding poem, where the enticing song of the temptresses gives way to wails founded in tediousness (‘ennui’). 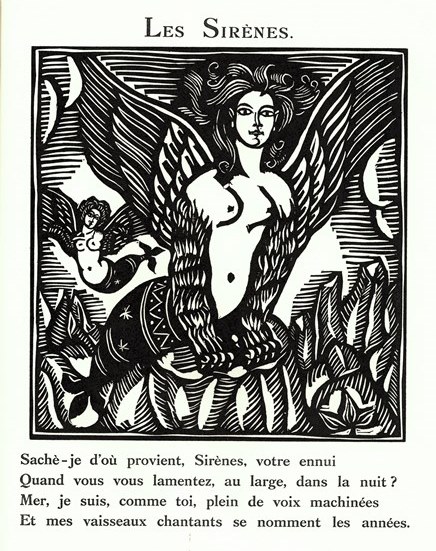 The position of the poet himself becomes ambiguous when his identification with Orpheus leads to an association with the sirens, as he depicts himself as the sea, full of ‘vaissaux chantants’ and ‘voix machinées’, in a curious conflagration of the tricky and enticing sirens and the ships and crews which become their victims. While in Orpheus’ poem, death was associated with the sirens’ songs, in the sirens’ verses, age may account for the voices haunting the poet’s mind, and his experience may be related to the use and mastery of crafty devices in the range of his poetical work. 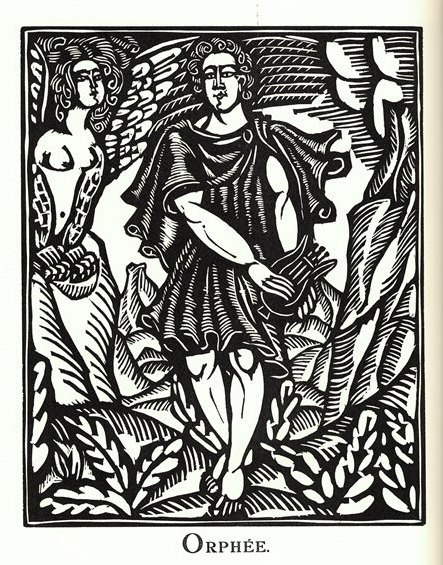 After the First World War, without consultation, both Louis Durey  and Francis Poulenc, members of the Groupe des six  (a group of composers close to the poetic avant-garde circles, Jean Cocteau in particular) set Apollinaire’s Bestiaire  to music. In 1919, Durey produced melodies for song and piano for the 26 animal poems of the Bestiaire (Music Collections G.1270.b.(16.)), while the four Orpheus sections remained spoken. A later version, produced in 1958, is set for voice and orchestra. Poulenc set 12 of Apollinaire’s poems to music, although following Georges Auric’s advice, he finally retained only six of them: Le Dromadaire, La Chèvre du Tibet, La Sauterelle, Le Dauphin, L’Ecrevisse and La Carpe, a work which gave him notoriety and had a long lasting success (Music Collections H.1846.kk.(2.)). 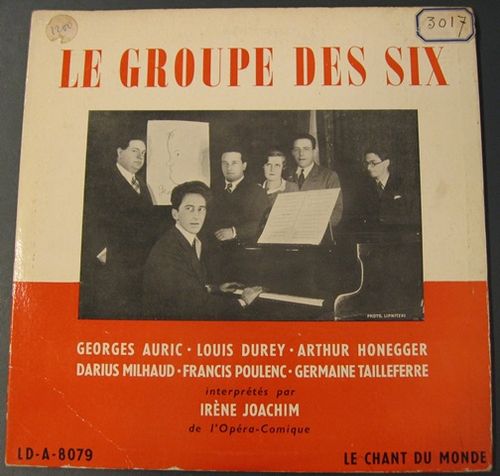 Later musical adaptations include Claude Ballif’s  30 poems for soprano or baritone and piano (1945-1948), Jean Absil’s Cinq petites pièces pour quatuor vocal mixte (1964), Alan Mills’ 6 poems for baritone and piano (1985) , John Carbon’s 3 poems for soprano, horn, cello and piano (2002), and Régis Campo’s 11 poems for soprano and orchestra (2008). The British Library Sound Archive holds many audio recordings of Poulenc’s songs (from the ‘Groupe des six’ to contemporary adaptations), several recordings of Durey’s Bestiaire and one of Absil’s, recorded by the Chorale universitaire de Grenoble, which can be listened to in the British Library Reading Rooms.