Despite being considered the more nurturing and caring sex, and having an age-old role as healers and nurses in families and communities, women were for centuries largely excluded from professional medicine, seen as the preserve of university-educated men.

One of the pioneering exceptions to this rule was Dorothea Christiane Erxleben, the first German woman to qualify as a doctor. She was born on 13 November  1715 in Quedlinburg to the physician Christian Polycarp Leporin and his wife Anna Sophia. Dorothea was bright and a quick learner, and her father was determined that she should share the same education as her younger brother, Christian. Both children studied Latin with a local schoolmaster and learned science and medicine from their father. 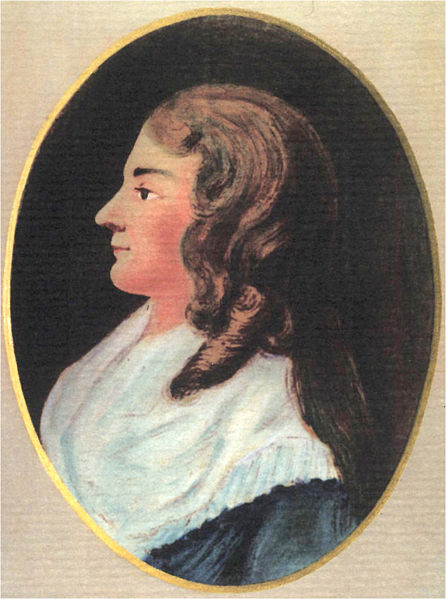 A contemporary portrait of Dorothea Erxleben (image from Wikimedia Commons)

However, childhood education was one thing, formal adult training quite another. While Christian might be expected to take over his father’s practice in due course, a medical career for Dorothea was impossible by contemporary standards. Nonetheless, the siblings planned to study medicine together and, with her father’s encouragement, Dorothea petitioned Fredrick II of Prussia for permission to enter the University of Halle with her brother. This was granted in 1741, but Dorothea did not actually attend the university. Accounts and chronology  vary between sources, but it seems that there was some problem involving Christian’s military service which left him unable to take up his own place at Halle and that Dorothea did not want (or was not able) to study there without his company.

Instead, Dorothea took what might seem like the complete opposite path: in 1742 she married Johann Christian Erxleben, a widowed clergyman with five children (she would have four more children of her own). But she clearly embarked  on matrimony and domestic life very much on her own terms and continued to study and practice medicine. In the year of her marriage she published a book describing and arguing against the factors that prevented women from studying. Again, her father was instrumental in encouraging her to publish, and provided a preface to the book, but Dorothea speaks clearly and firmly in her own voice.  She condemns familiar assertions that women’s education is a waste of time, goes against religious teaching, damages their health and strength, or prevents them from carrying out their ‘proper’ domestic duties. All of these beliefs she disproved in her own life, successfully combining the role of clergy wife and mother to nine children with her work in medicine. 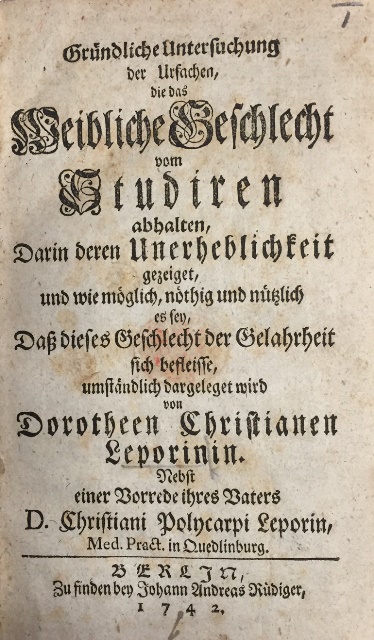 On her father’s death in 1747, Dorothea took over his practice, effectively becoming a doctor in all but name. This made her enemies among other local physicians, and the death of one of Dorothea’s patients gave them the opportunity to accuse her formally of ‘quackery’ and of practising without qualifications.  In order to clear her name and be able to continue working, Dorothea volunteered to submit a medical dissertation for examination. The civic and university authorities debated for some time whether a woman could in fact qualify as a doctor: did the university statutes allow for female students, and if medicine was a public profession, were doctors public officials, a role from which women were barred?

Finally, on 12 June 1754, Dorothea was allowed  to present and defend her dissertation before the medical faculty in Halle – in Latin, as was usual at the time. Her argument was that swift and pleasant cures were often deleterious to a patient’s health in the longer term. She impressed the examiners both with her medical knowledge and her Latin and was awarded her doctorate. The published version of the dissertation includes a number of tributes in both Latin and German by her supporters, including her old Latin teacher, Tobias Eckhard. 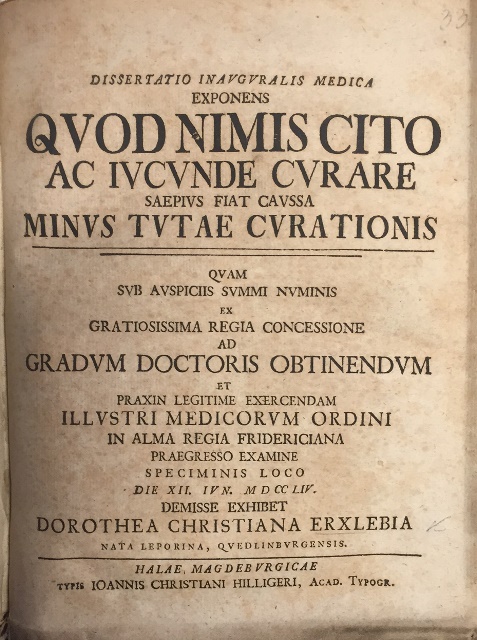 Dorothea would continue to practise medicine unhindered until her death in 1762. Sadly, however, she remained an exception in German medical history for nearly 150 years. Only at the start of the 20th century would women be admitted to German medical schools. However, Dorothea is still remembered as a pioneer. Various clinics and foundations have been named after her, a commemorative stamp bearing her image appeared in the 1980s, and on the 200th anniversary of her birth she has been the subject of the day’s ‘doodle’ on the German Google site, bringing this 18th-century pioneer into the 21st century.