Wojtek, the soldier bear from the Polish Army

On 7th November an unusual ceremony took place in Edinburgh: a monument to a soldier bear was unveiled to hundreds of people gathered in the middle of town. The statue had been commissioned by the Wojtek Memorial Trust, an organisation set up in 2008 by Aileen Orr. She is also the author of the book Wojtek the Bear: Polish war hero (Edinburgh, 2010; British Library YC.2011.a.10359), which makes a good read.

The story of the brave soldier bear started in Persia (today’s Iran) in 1942. Found in the mountains as an orphaned cub, he was sold to Polish soldiers for a few cans of corned beef. The Polish Army, newly formed in the USSR under General Władysław Anders, was on its way through Persia to Palestine.  Corporal Piotr Prendysz was appointed as the cub’s guardian, and the bear was given the name Wojtek (Voytek) meaning “joyful warrior”. The legend has it that Wojtek was enlisted as a soldier with the rank of Private and his pay was double food rations. In fact, he was adopted by the soldiers of the 22nd Artillery Supply Company of the 2nd Polish Corps and became their mascot. 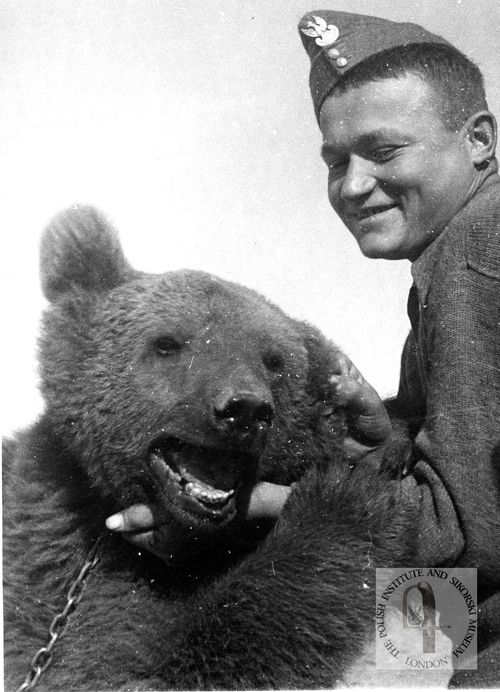 Wojtek in Iraq, 1942. Courtesy of the Polish Institute and Sikorski Museum.

Initially Wojtek was fed with diluted condensed milk via an old vodka bottle. He quickly grew huge, weighing 250 kg and measuring almost two metres in length. He loved beer and cigarettes, eating instead of smoking the latter.  His favourite game was wrestling with his fellow soldiers, but due to his gentle nature he never hurt anybody.  He liked human company so much that at night he often slipped into tents and slept beside his mates’ beds. Wojtek soon became the soldiers’ best friend. Although he settled well into army routine his record of acts of mischief was steadily growing.  In a large Allied forces’ military camp in Iraq Wojtek stole a washing line of women soldiers’ underwear to the horror of the terrified women.  On Christmas Eve after a traditional Polish feast he made his way to the camp food store. In search of his favourite jams and fruits he devastated the place. Spilled cooking-oil was mixed with flour, grain and other foods on the floor.  However, in June 1943, in an attempt to commit another crime, he captured an Arab spy. Wojtek was barred from taking his much-loved showers due to the shortage of water, a precious commodity in the Middle East. The door of the bath house was locked but he would hang around outside.  On this day he spotted the unlocked shower door, and upon entering he found a man hiding in the showers whose screams alerted the camp guards. 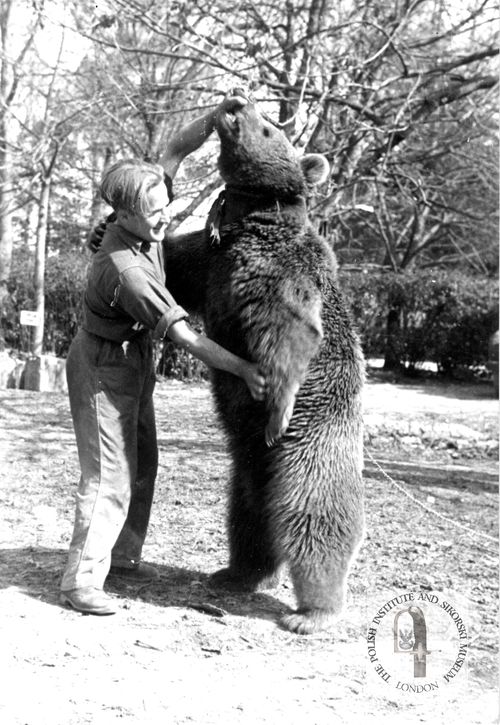 Wojtek wrestling his comrade. Courtesy of the Polish Institute and Sikorski Museum

In 1944 the Polish Corps was transferred from Egypt to Italy to fight in the Italian campaign with the British forces. To embark on the ship Wojtek needed a special permit. Convinced by the argument that he contributed hugely to strengthening the fighting spirit of the soldiers, the British authorities approved his travel warrant just in time for him to join the Company on their voyage to Italy. However, the height of his fame came during the Battle of Monte Cassino in May 1944. Wojtek helped his comrades carry artillery shells to the front line. He watched what the soldiers were doing and stood upright with his front paws outstretched, indicating his intentions.  He carried the large boxes of ammunition from the supply lorries to the artillery positions even under heavy cannon fire.  After the battle Wojtek featured on the 22nd Company logo showing a bear carrying a shell. The Company fought in the battle of Bologna in April 1945, the last combat in the Italian campaign.  A year later they finally sailed for Glasgow and this time Wojtek was officially on the passenger list. 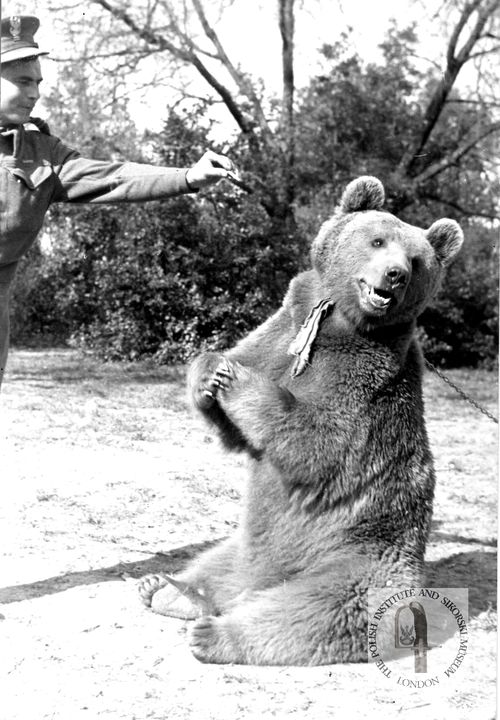 A happy Wojtek, Italy, October 1944. Courtesy of the Polish Institute and Sikorski Museum

Wojtek had spent one year at Winfield Camp in Scotland together with his mates before the company was demobbed, and was  then transferred to Edinburgh Zoo in 1947. Though he was the main attraction for numerous visitors to the zoo he greatly missed his comrades in arms and always reacted joyfully to the Polish language. He died there peacefully in November 1963. 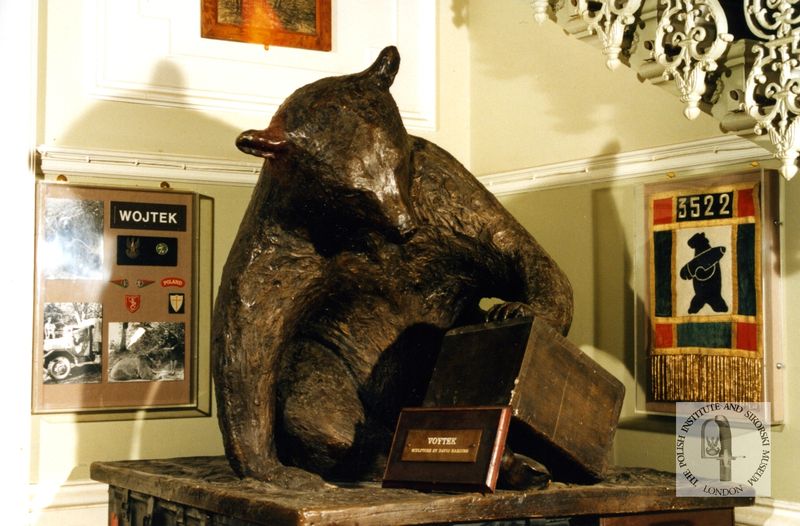 Wojtek’ statue in the Polish Institute and Sikorski Museum. Courtesy of the PISM.