“In true heroic mould”: witnessing the retreat of Serbia, 1915

A century ago, in December 1915, the first complete calendar year of the First World War was drawing to a close.

A number of new countries had entered the fray during the preceding 12 months, adding pressure to those states which had been fighting one another since 1914. Among the most vulnerable nations of all was Serbia, a small country ravaged by typhus and other diseases, and fighting its third war in as many years. Because of its government’s alleged role in the assassination of Archduke Franz Ferdinand, it was the main target for annihilation by the Austro-Hungarian high command.

Serbia had emerged as chief victor from the Balkan Wars of 1912-1913, but assimilating its new territories was a huge challenge without the added burden of another war, and fallings-out among former allies left wounds which reopened in 1915. In September, Bulgaria joined the War on the side of the Central Powers, hoping to win Macedonian territory taken by Serbia in 1913.

Thus, in autumn 1915, Serbia faced a double onslaught. Austrian and German troops renewed their assault on Belgrade from across the Danube, while Bulgaria joined the attack from the east. This was finally too much for the beleaguered country. To avoid surrender, Serbia’s leaders instructed the army to make for the Albanian coast, and so it set out, led by the elderly King Petar and Field Marshal Radomir Putnik, both borne on stretchers before the busy pencils of war artists. Periodically, the stretcher-bearers were forced to halt so they could swap with other colleagues, and the entire convoy of refugees, several miles long, had to halt behind them, standing exposed in wind and rain until the leaders were ready to move on again. 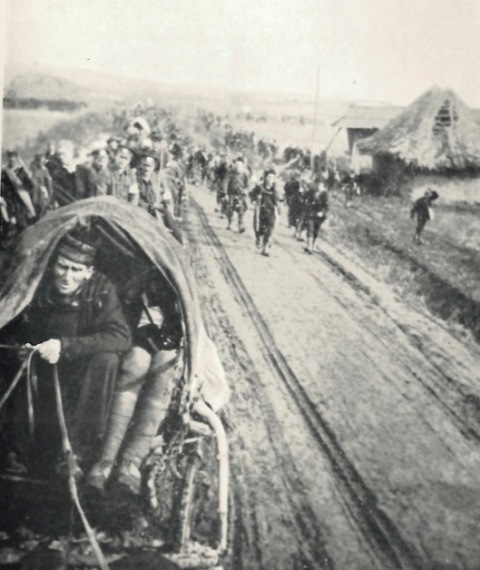 The convoy of refugees, picture from Jan and Cora Gordon, The Luck of Thirteen: Wanderings and Flight through Serbia and Montenegro (London, 1916). British Library 12208.a.1/223.

Along the narrow mountain passes and through knee-deep muddy valleys they went, sleeping in makeshift bivouacs or in the open air, leaning on their animals for warmth: the Serbian army, hundreds of Austrian prisoners-of-war, hordes of camp-followers, foreign journalists and medical staff (whose own governments had also instructed them to leave the occupied country) and finally thousands of civilians, encouraged by the government to evacuate rather than fall into enemy hands.

“Quantities of carts passed us filled with furniture, baths, and luggage,” wrote two intrepid British artists who were there. “A smartly dressed family was picnicking by the roadside, sitting on deck-chairs.….Crowds were congregated round a man who was carrying over his shoulder a whole sheep on a spit and chopping bits off for buyers. On a hillside a woman was handing out rakia ….The Crown Prince passed, touching his hat to fifty kilometres of his people.” 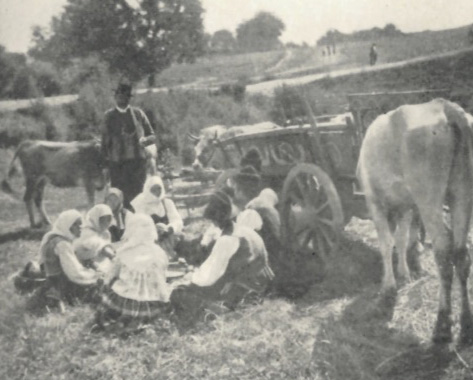 These authors are resourceful and jaunty through all their privations, but some foreign witnesses captured the human pathos with greater sensitivity, noting children who were full of bravado by day but wept quietly in their rough camps at night, when they thought no-one could hear. Tens of thousands of the party of soldiers and refugees died of hunger or disease en route, or in mountain ambushes by Albanian tribesmen avenging incidents from the Balkan Wars. 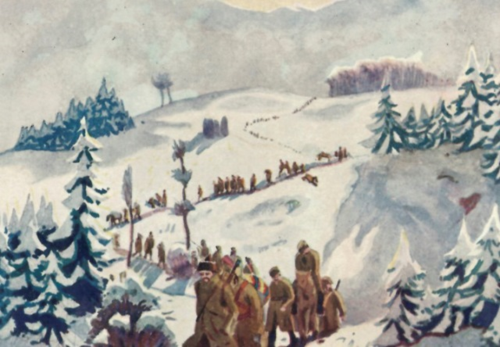 Ultimately, up to 200,000 desperate survivors were evacuated at the coast by those Entente ships which got through the bombardment by the Austrian navy and air force. They went on to exile in France, North Africa or Greece, where many more would die of flu or of the effects of their journey.

Over the months that followed, a series of books appeared in Britain and the United States, describing the valour and agony of the retreating nation through the eyes of the foreigners who had taken part in the exodus. Many bore a dedication to “Alexander, Crown Prince of Serbia”, for the young man became a symbol of hope for the future of his country, “an apostle of progress as well as a knight Paladin”. After their appalling ordeal, both he and stoic, defeated Serbia seemed “a curious blending of the medieval and the modern,” imbued with “a fine glamour…[and] cast in the true heroic mould.”

Regrouped Serbian troops under the Crown Prince’s command went on to fight on the Salonika Front, which delivered fatal blows to Bulgaria and the Ottoman Empire and hence to the Central Powers. Returning home in 1918, the Crown Prince (and Regent for his venerable father) found his ambitions for the future well-supported by his western Allies, greatly bolstered the body of sympathetic literature produced in the aftermath of 1915’s extraordinary journey.