‘On the hay in horses’ stable’: a Kalevala nativity

As 2015 comes to an end, the year in which the 150th anniversary of the birth of Jean Sibelius was celebrated with concerts of his music throughout the world, it is also appropriate to recall that it also marked the 180th anniversary of the publication of the first printed version of the Finnish national epic which inspired so many of his works – the Kalevala. 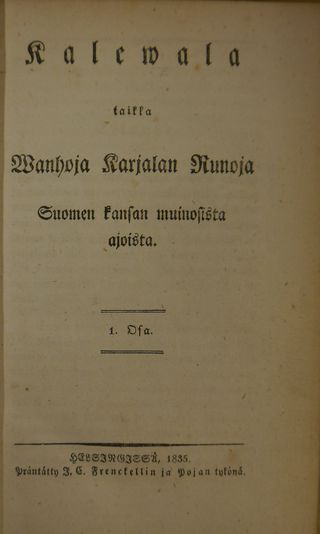 The edition was composed of material gathered by Elias Lönnrot (1802-1884), a physician whose work  as district doctor of Kajaani in Eastern Finland took him deep into the countryside, as the 4,000 people for whom he was responsible lived in scattered communities. He arrived in the area at a time when it had been ravaged by disease and crop failure, causing his predecessor to resign in despair. However, Lönnrot was ahead of his time in many ways, recognizing the importance of preventive measures such as hygiene and vaccination and also the value of traditional remedies, many of which he employed himself rather than dismissing them as primitive nonsense, and thus won the trust of his patients. 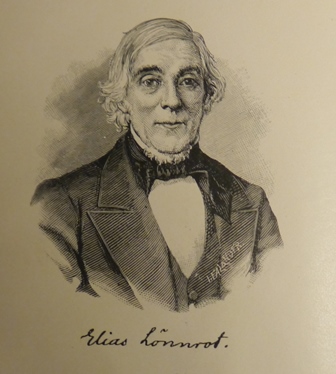 Along with these folk remedies Lönnrot, a passionate advocate of the Finnish language against the enforcement of Swedish and Russian by successive governments, began to collect fragments of ancient lays taken down from local singers. These told of the feud between the people of Kaleva and those of Pohjola, the quest for the Sampo, a powerful talisman, and the exploits of the legendary heroes Lemminkäinen, Kullervo and Väinämöinen, a smith, musician and adventurer who devised the Finnish national instrument, the kantele. Like the Homeric epics, the Kalevala also includes many fascinating details of crafts, warfare and household management, as well as enshrining the values by which the people of Kaleva lived.

Not only Sibelius, in his Kullervo symphony and cycle of Lemminkäinen legends including The Swan of Tuonela, was inspired by the Kalevala. Composers, poets, painters and sculptors in Finland and abroad seized upon the magic and mystery of its verses to explore its many layers of symbolism and potential for expression in a wide variety of media. It has also been translated into many languages since its first appearance. In Finland 28 February is celebrated annually as  ‘Kalevala Day’ to commemorate the publication of Lönnrot’s first version of the epic in 1835.

One  of the less familiar episodes, though, is especially suited to the Christmas season. In the 50th and final Runo (canto), the narrator tells of Marjatta, a cherished and protected young girl so pure that she will not drive in a sleigh pulled by mares who have been running with a stallion, or drink milk from cows who have been kept with a bull. Sent to the upland pastures to guard the flocks, she eats a magical lingonberry and shortly afterwards finds that she is expecting a child. Her parents cast her out, and she seeks refuge in vain with neighbours who drive her away with harsh words. In a stable deep in the forest she gives birth to a son, warmed by the breath of the horses:

Then she wrapped the little infant
And in swaddling-clothes she wrapped him,
On her knees she took the infant,
And she wrapped her garments round him. The opening of Marjatta’s story, vignette and design by Akseli Gallen-Kallela, from Kalevala (Porvoo, 1949) o11586.ppp.1.

Shortly afterwards the baby mysteriously vanishes and Marjatta goes in search of him, asking the stars, moon and sun for guidance until she finds him in the marshes and carries him off to be baptized. The old man asked to do so demurs, asking Väinämöinen for his judgment. When the latter calls for the destruction of the child, the infant speaks out and denounces him, and Väinämöinen, realizing that his power is at an end, sings for the last time before stepping into his copper boat and sailing away, leaving his kantele as a final gift to ‘Suomi’s children’.

Drawing together the threads of Christian and pagan tradition like Virgil’s Fourth Eclogue, the closing lines of the Kalevala sum up its enduring significance for the Finnish people and for poets throughout the world:

Here the path lies newly opened,
Widely open for the singers,
And for greater ballad singers,
For the young, who now are growing,
For the rising generation. 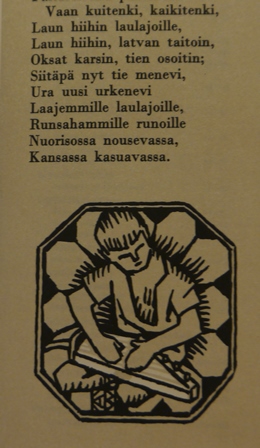 The last lines of the Kalevala, with vignette by Akseli Gallen-Kallela of a child playing the kantele, from o11586.ppp.1.