This year marks the bicentennial of Napoleon Bonaparte’s defeat at Waterloo and of the dramatic 100 days which preceded it. One of the many events organized to commemorate the historic event was put together by the British Museum, featuring its extensive collection of British satirical prints from the Napoleonic Era (1799 to 1815).

But we should not forget his nephew, the equally ambitious Louis-Napoleon, who was also a favourite object of mockery in satirical papers across Europe. Indeed, the large nose and moustache of Napoleon III (as he would anoint himself in December 1852) were internationally recognizable. The British Library houses a rich collection of Napoleon caricatures, including many German and French ones from the Franco-Prussian War (1870-71), located at shelfmarks Cup.648.b.2, Cup.648.b.8, and 14001.g.41, and these collections have been the object of some very interesting research.

The British Library is also home to another collection of Napoleon caricatures that has yet to receive the scholarly attention it deserves. Napoléon III et la Caricature Anglaise [1761.a.12 and LR.22.b.20] is one of three collections of newspaper cuttings donated by Frederic Justen to the British Museum in the late 19th century. Justen, it has been surmised, was a German-born bookseller residing in Soho, probably of French Protestant origin. This collection, comprises three leather-bound volumes, complete with an official-looking title page that simply says ‘Londres, 1873’ and is adorned with the Napoleonic Seal. It is probable that Justen bound these volumes himself, because there is no British Museum stamp on the covers, and because the acquisition stamps are dated 1874, the year after the given date of publication.

As the title suggests, the collection is composed of clippings from various British satirical newspapers, mostly Punch [P.P.5270.ah], which feature reports, poems, caricatures and other humoristic ways of representing Napoleon III’s rise and fall from power between 1848 and 1871. For the purposes of concision, I have focused only on the first volume, which covers 1848 to 1860. First elected president in December 1848; gradually tightening his control over both government and the press; staging a coup d’état in December 1851; and finally declaring himself Emperor one year later; Napoleon’s power grab took place in such a piecemeal manner that the average Frenchman going about his daily life may not have realized the significance of what was happening.

It is unlikely that Justen, just 16 years old in 1848, was collecting these news items as they appeared. Instead, he probably began looking through back issues of satirical magazines in or around 1871, perhaps searching for a narrative to explain the extraordinary events of the end of the Empire, such as the Franco-Prussian War and the Paris Commune. By selecting only certain items, and leaving out the many other important events reported in the news during that period, Justen altered the temporality of the narrative. This sort of reorganization of events in time in order to give them coherence and direction is what Paul Ricoeur has famously termed “emplotment.” 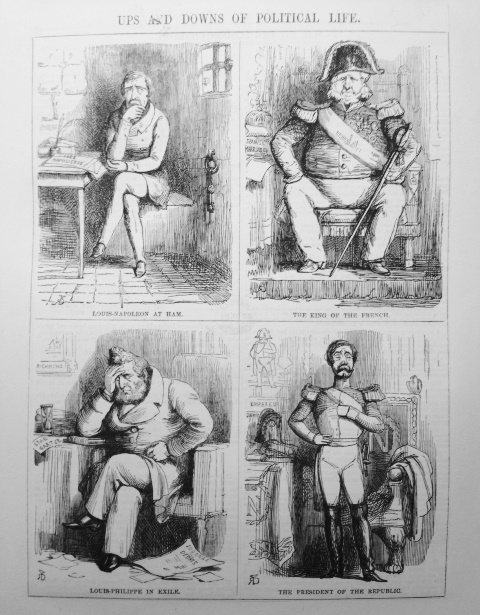 For example, near the beginning of the volume, the reader finds a fairly mirthful 1848 sketch of Louis-Philippe and Louis-Napoleon titled ‘Ups and Downs of Political Life’ (above); but the imagery and the language of the cuttings suddenly become much darker just a few pages later. ‘The Modern Damocles’ (below), a caricature from December 1851, depicts the newly appointed ‘President for Life,’ perched miserably on his throne, a menacing sword hanging over his head. By placing the two events nearly side-by-side, Justen establishes an almost teleological account of Louis-Napoleon’s rise and fall from power. 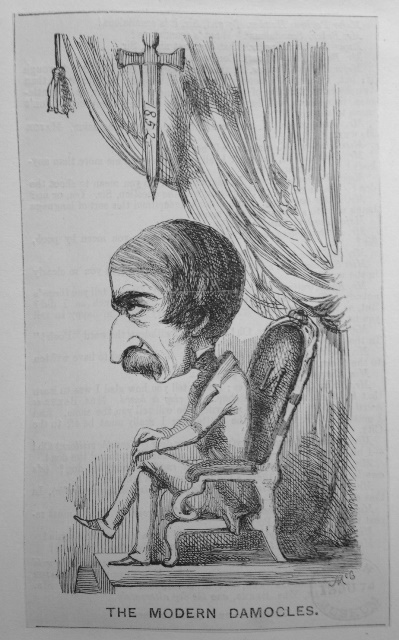 A desire for a narrative of the Empire is also evident in the way that the collector assembled his book, although it is often hard to figure out just exactly what he was trying to convey with his choices. For instance, Volume I begins with a cutting from 1864 (below) featuring Mr. Punch acting as a peep-show animator, with a line of foreign dignitaries queuing up to see the show. 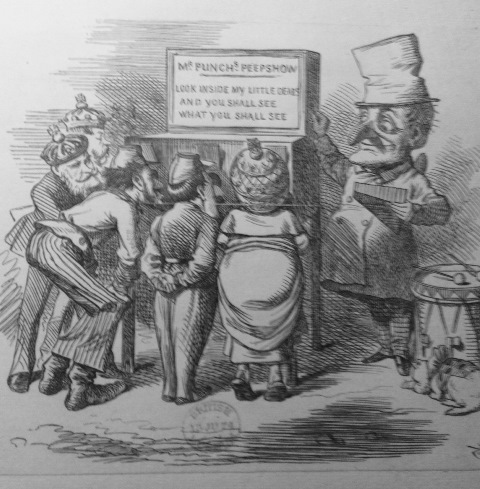 While Napoleon is among the audience, he is neither more nor less important than the other guests, which include Otto von Bismarck, Abraham Lincoln, and the Pope. This frontispiece serves as an introduction to the entire collection, so why choose an image where Napoleon features so vaguely? I am tempted to guess that Justen is making a statement about himself, calling attention to the similarities between his own act of constructing a narrative – presenting history as a spectacle – and the voyeuristic art-form of the peep-show.

As is often the case, this collection provides as much information about the collector as the collected objects, and it brings up more questions than answers. The figure of Frederic Justen is intriguing. Who was this German-born bookseller living in London, and why did he take the time to put together these volumes? Why did he carefully cut out and paste his texts and images in this particular way? Why did he choose the items he did (a quick perusal of Punch shows some blatant omissions)? While some of these mysteries are unsolvable, there is a great deal of cultural insight to be found in these volumes, which clearly deserve more attention than they have thus-far received.

Morna Daniels, ‘Caricatures from the Franco-Prussian War of 1870 and the Paris Commune’ Electronic British Library Journal (2005)