The Russian Refugee Crisis of the 1920s

‘Never in the history of Europe has a political cataclysm torn such huge numbers of people from their mother country and from their homes’.

These words, written by Russian émigré journalist and politician Ariadna Tyrkova-Williams in December 1921 (British Library Add MS 54466, ff. 93-96), refer to the revolution and civil war that tore Russia apart from 1917 until the early 1920s. The war led to the displacement of over one million people, including countless children. The majority of the refugees sympathised with the Whites, the group of forces who fought the Bolsheviks on a number of fronts across the country, and were from Russia’s educated classes. Due to their political affiliation and the effects of war and famine, people chose, or were forced, to flee their homes as the Whites suffered heavier defeats. Those who could left Russia for Europe or the Far East. Tens of thousands initially fled to Constantinople before settling in the newly independent Baltic countries or cities such as London, Belgrade, Paris, and Berlin. 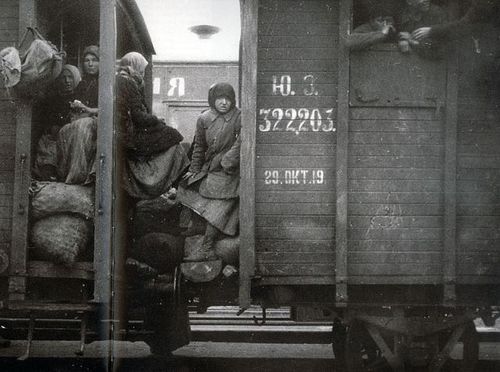 The British Library’s Tyrkova-Williams Collection contains a number of English, French and Russian-language documents concerning the international response to the refugee crisis and the activities of Russian émigré organisations, such as the London-based Russian Refugees Relief Association (RRRA). The RRRA was established in late 1920, immediately after the White Army General Wrangel’s forces were evacuated from the Crimea and ‘200,000 refugees were added to the hundreds of thousands of the Russian émigrés whom civil war had driven out of Russia [sic]’ (Add MS 54466, ff. 74-78).

Chaired by Tyrkova-Williams, the organisation counted both Russian and British figures among its members. Alongside printing and distributing appeals for clothing and money (see for example Add MS 54466, f. 88), the RRRA organised fundraising events, such as a June 1922 dance held at Chesham House, the former Russian Embassy in London. Patronesses of the dance included several members of the British aristocracy, such as Lady Maud Hoare, wife of British Conservative politician Sir Samuel Hoare, highlighting the RRRA’s standing in British society. 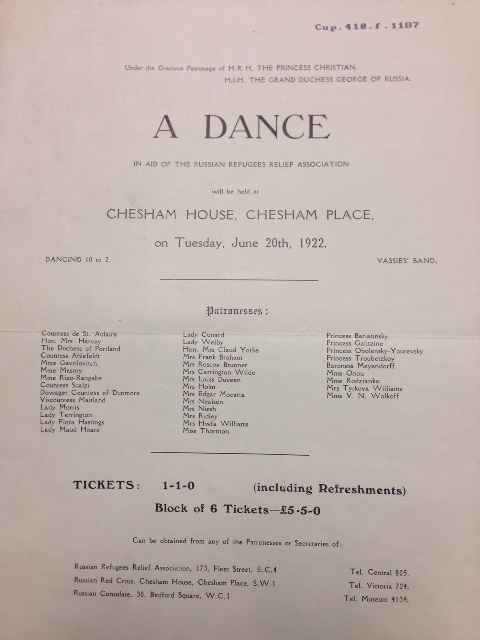 Poster advertising the charity dance in aid of the Russian Refugee Relief Association in June 1922. Cup.410.f.1187

While the RRRA’s primary aim was to aid those fleeing the war, its political agenda must not be forgotten. A number of the organisation’s key members, including its chair Tyrkova-Williams, were actively involved in supporting the White movement’s propaganda activities against the Bolsheviks. Appeals to the British public to assist Russia’s refugees therefore had a second purpose: to direct public opinion firmly away from the Bolsheviks by drawing attention to the suffering experienced by Russians living under their rule.

In 1921, formal international efforts to aid the Russian refugees began when the International Committee of the Red Cross appealed to the League of Nations to assist them. The British Library’s manuscript collection includes reports by the Russian Red Cross (RRC) relating to the issue of wider international assistance. One document summarises a 1921 report made by Dr Ladyzhenski, the RRC delegate in Geneva, on the ‘most urgent needs of the Russian refugees’, particularly those in Constantinople (Add MS 54466, f. 91). Discussing issues such as the provision of food, legal status and the fair distribution of the refugees across Europe, the report provides an insight into international attitudes towards the refugee crisis and the challenges facing organisations attempting to assist them.

These documents are particularly poignant in the context of the current refugee crisis in Europe and the increased charity appeals for aid in the run up to Christmas and the onset of winter. Nearly one hundred years later we still see the same devastating consequences of civil war. Yet we also witness the same compassionate responses from ordinary citizens and charity organisations trying to help those in need.

Katie McElvanney is a collaborative PhD student at the British Library and Queen Mary University of London. She is currently cataloguing the BL’s H. W. Williams Papers (part of the Tyrkova-Williams Collection).