The Stories of ‘Silent Night’

Few Christmas carols are better known and loved than ‘Stille Nacht’ / ‘Silent Night’, and probably none has such a familiar romantic tale attached to its origins. Most people know the story of how the church organ in the small town of Oberndorf near Salzburg was found to be broken on Christmas Eve 1818, and how the priest, Joseph Mohr, and organist, Franz Xaver Gruber, hastily wrote the words and melody of a song which could be performed to a guitar accompaniment instead. 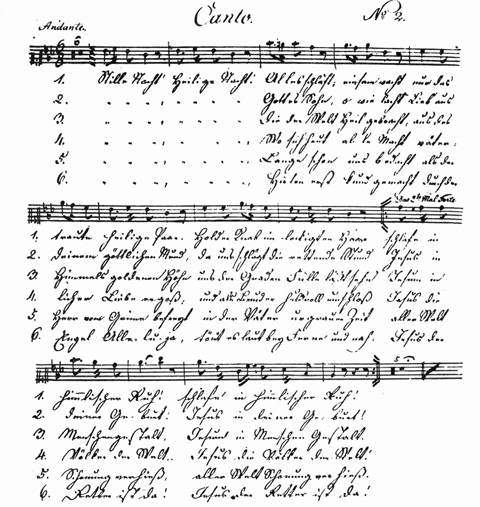 This is partly true. The song was indeed written by Mohr and Gruber and first performed, to a guitar accompaniment, at Christmas 1818, but Mohr had in fact written the words two years earlier and the story of the damaged organ is speculation (besides, presumably there were existing carols which could have been sung to a guitar…). 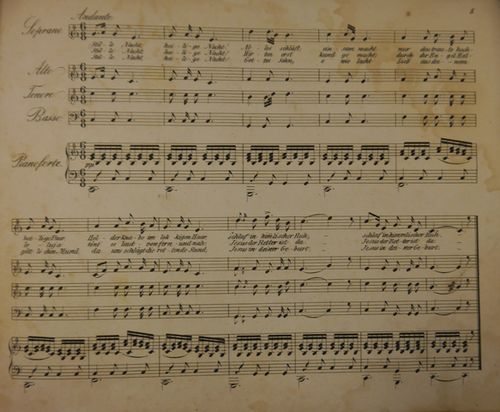 Although the song quickly gained local popularity around Oberndorf, it was taken to a wider audience by two families of singers, the Strassers and the Rainers, who both came from another part of Austria, the Tyrolean Zillertal. The Strassers were glove-makers who started singing as a group to attract custom to their stall at the Leipzig Christmas fair. They were subsequently invited to perform at Christmas services and concerts in the city, and for a few years in the early 1830s they devoted themselves to a singing career, travelling around Germany with ‘Stille Nacht’ as a popular part of their repertoire. They cut Mohr’s original six verses down to three, and this is the form of the song that is known today and was first published in a collection of ‘authentic Tyrolean melodies’ as performed by the Strassers. 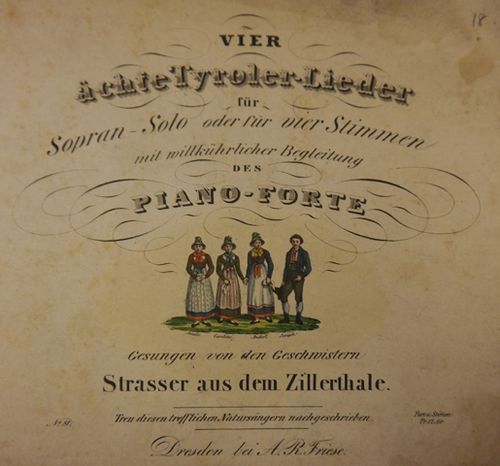 Incidentally, the Strassers apparently first heard of ‘Stille Nacht’ from Carl Mauracher, an organ-builder who rebuilt the church organ at Oberndorf in 1825. Could his role in the transmission of the song have inspired the story of a broken organ forcing Mohr and Gruber to improvise?

The Rainers were a more professional and longer-lived group. They travelled beyond Germany, taking  ‘Stille Nacht’ to international audiences, including America, where they toured from 1839 to 1843, and where the first English translation of the song appeared in 1849. Ten years later the most familiar English version was published by an American Episcopal priest, John Freeman Young. 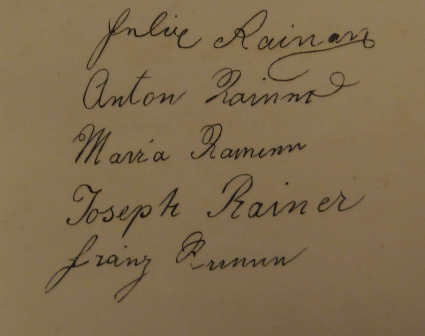 Fascimile signatures of the Rainer Family Singers, from an edition of ‘Tyrolese melodies’ published in London (R.M.13.f.22.). The signatures guaranteed that this was an authentic and approved edition, evidence of the Rainers’ more professional and businesslike approach to their singing career.

Like the Strassers, the Rainers were advertised as singing traditional Tyrolean songs, and ‘Stille Nacht’ was not attributed to either Mohr or Gruber in its earliest publications. The melody was generally thought to be either a Tyrolean folk-tune or the work of Michael Haydn. In 1854 the Prussian Court Chapel in Berlin wrote to St Peter’s Abbey in Salzburg asking for clarification; the letter found its way to Gruber who wrote an account of the song’s origins, identifying Mohr as author and himself as composer, although a  printed score in the British Library (F.1171.mm.(22.)) attributes the tune to Michael Haydn as late as 1921. 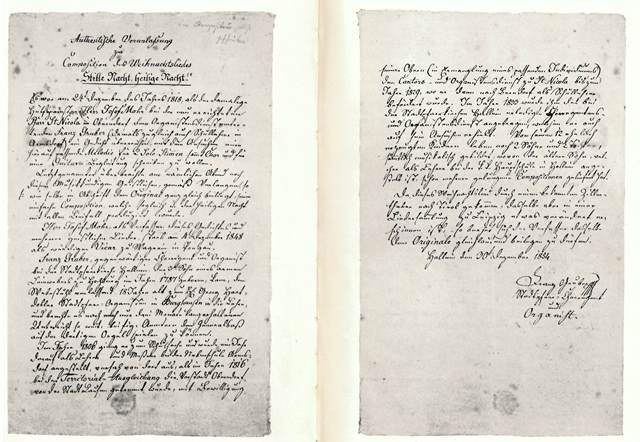 Despite Gruber’s efforts, legends and misinformation continued to accumulate around the song. A completely untrue claim that Mohr translated the words from Latin dates from 1899 and was still being quoted nearly a century later. The story has been fictionalised several times and there have been film and theatre adaptations, all adding various romantic subplots and embellishments to the original tale, many of which can be found today presented as truth on the Internet and elsewhere.

But none of this mythology would have accumulated without the song’s genuine popularity and power to move. For British audiences in particular it has gained in emotional impact by becoming linked with the story of the 1914 Christmas Truce (another true story around which many legends have been built), when British and German soldiers sang it together across the lines. It has been translated into over 300 languages and dialects, and in countries all round the world Christmas would not be Christmas without it. No wonder we love the story of its rise from humble origins to worldwide fame.