The British Library is currently marking the 150th anniversary of Alice in Wonderland with an exhibition, but Alice is not the only children’s classic to turn 150 this year. In Germany the focus has been on Wilhelm Busch’s much-loved Max und Moritz. Busch published a number of illustrated, rhymed tales in the course of his career, but this was the most successful and enduring.

The story tells how bad boys Max and Moritz terrorise their small village with seven ‘pranks’. First they kill Widow Bolte’s chickens, and when the widow tries to make the best of things by roasting the birds, the boys’ second prank is to steal them from the oven. 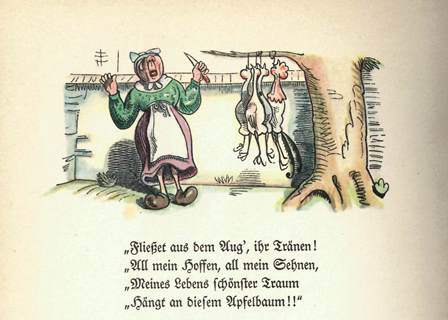 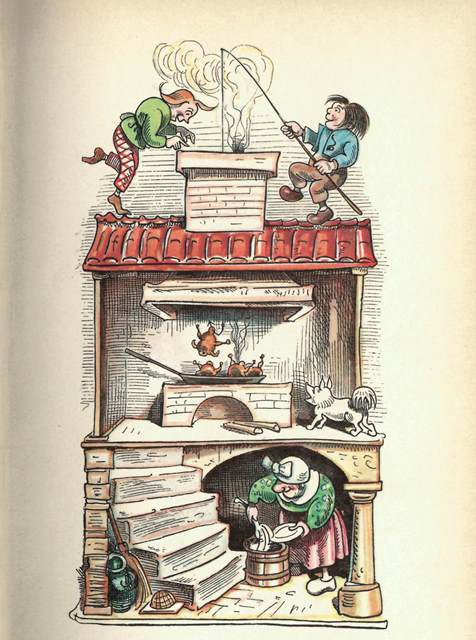 Next they lure the local tailor onto a bridge which they have sawn through so that he falls into the stream: 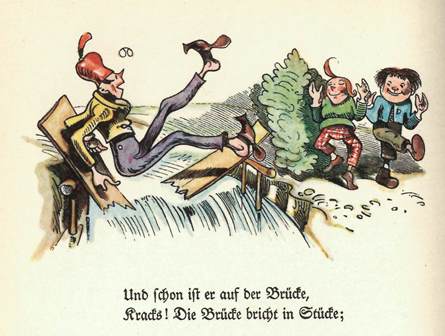 For two such bad boys a teacher is an obvious target, and in the fourth prank they fill schoolmaster Lämpel’s pipe with gunpowder: 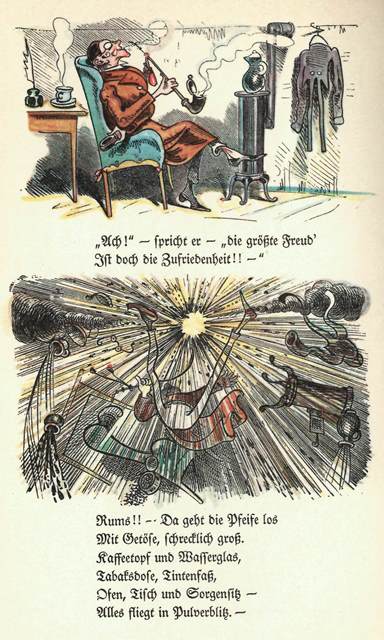 Prank five is tame by comparison: they put cockchafers in Uncle Fritz’s bed:

Things start to go wrong in prank six, when the boys try to steal from a bakery. They fall into the dough and are baked themselves, but miraculously survive and eat their way out of their crusts: 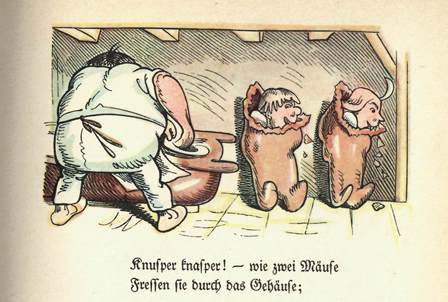 However, their seventh prank is their last: they cut holes in a farmer’s grain sacks, but the farmer catches them and takes the boys to the mill instead of his spilt grain. There they are ground into meal and eaten by the miller’s geese: 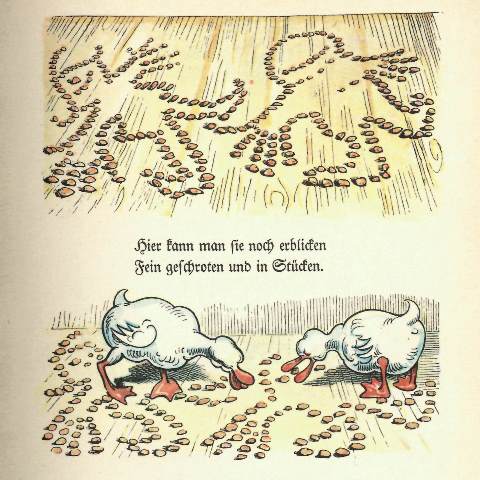 And nobody in the village is sorry.

Busch tells his story in lively and witty verses, accompanied by his own illustrations. Like Heinrich Hoffmann’s earlier Struwwelpeter, the book can be seen as a forerunner of the modern comic strip – something borne out in the case of Max und Moritz by the fact that the early American cartoon strip The Katzenjammer Kids was inspired at least in part by Busch’s story and characters.

After a slow initial reception, Max und Moritz soon became established as a classic in Germany. The stories, and in particularly their illustrations, are still much reproduced and instantly recognisable. There have also been many parodies and imitations of the work, the latter including a ‘Max und Moritz for girls’ by Wilhelm Herbert entitled Maus und Molli, first published in 1925. This has been reissued for the anniversary of the original, attracting a review in the Frankfurter Allgemeine Zeitung, cleverly written with the same metre and rhymes as Busch’s and Herbert’s stories. 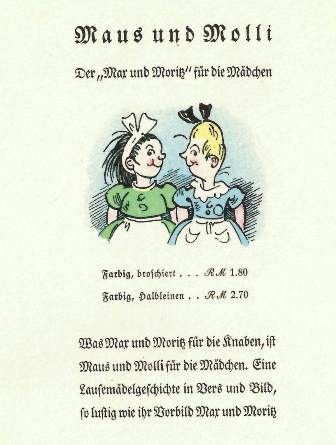 An English translation first appeared 1871, and while Max und Moritz never became as popular with British audiences as Struwwelpeter and is currently out of print in the UK, there were a number of English translations, including one by Arundell Esdaile, more famous as a bibliographer, librarian and historian of the British Museum Library (sadly, alone among translators, Esdaile drops the trochaic tetrameter form which gives the original verses much of their vivacity). The British Library also holds two translations into Scots dialects, where the heroes become ‘Dod and Davie’ or ‘Jarm an Jeemsie’. 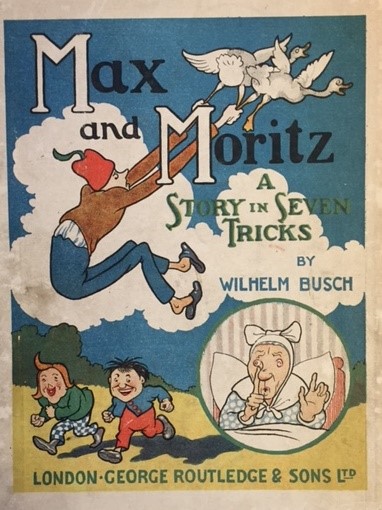 Indeed, translations of the book into local dialects and smaller or ancient languages seem surprisingly common. As with several children’s classics (including Struwwelpeter and Alice) there have been various Latin versions. The British Library holds a Yiddish version (Shmul und Shmerke), and a study published in 1997 lists over a hundred versions in various German dialects, although some were published in, and perhaps written for, specific anthologies of such translations. There seem to be plenty of academic linguists who are Busch enthusiasts, most notably Manfred Görlach who edited The True Story of Max und Moritz, a clever pastiche of philological studies which traces the ‘textual tradition’ of the story back to ancient Egypt and includes versions in early languages including Gothic, Anglo-Saxon and Old English. 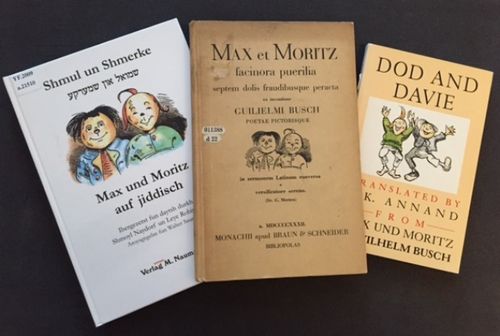 Max und Moritz may not mean much to a British audience in its centenary year, but it is certainly not forgotten in Germany, and for the curious Anglophone reader, it is worth taking a look at a translation to find out why the Germans still enjoy this tale of boys behaving badly.