Art and Politics: the work of Igor Cherchenko

The British Library has just acquired the recently-published debut catalogue by the Vitebsk-born Israeli artist Igor Cherchenko, Zhivopis’, grafika = Paintings, graphics (2015; British Library LF.31.a.5194).  I am grateful for an opportunity to introduce the book to the readers of the European Studies blog.

Cherchenko is an autodidact. Even though his pictures were regularly chosen for school exhibitions, he received poor marks in his art classes, because he’d always draw for all his classmates and never had time to draw for himself. This time arrived when he fell ill during his army service in Israel, and realised that art was a unique opportunity for him to “talk to the world seriously” (as he put it in a conversation with me, when I first met him in Tel Aviv in May 2013). In the Soviet Union, Cherchenko didn’t want to draw and paint to order. Instead, he went to a factory to work as an apprentice lathe operator. Now, in his new country of residence, the Tiroche Auction House in Herzliya sells his pictures for US $500-1,000 apiece. 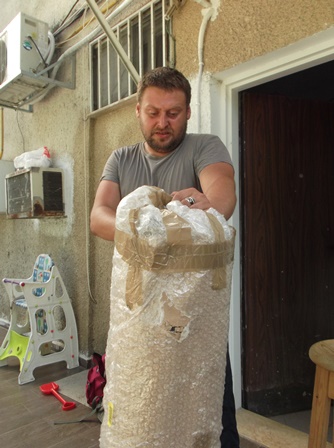 Perhaps the most striking thing about Cherchenko’s book is that it has a special section on his political activism, with photographic illustrations. One does not find such sections in art catalogues very often. Since 2001, Cherchenko has been a member of the Israeli branch of the National Bolshevik Party of Russia (NBP), formed in 1993, banned in 2007 for extremism and subsequently reconstituted as the Other Russia party. It “started as an art project, became an anti-oligarch revolutionary party mixing Trotskyism and Fascism, and then transformed again to become a Kremlin ally” (Peter Pomerantsev, Nothing Is True and Everything Is Possible (London, 2015) YC.2016.a.5635; pp. 207-208).

By Cherchenko’s own admission, he was attracted to the NBP by its fusion of “the hard left and the ultra-right” (Marc Bennetts, Kicking the Kremlin: Russia’s new dissidents and the battle to topple Putin (London, 2014); YC.2014.a.13537. p. 35). For him and his fellow Israeli party members, a union of left- and right-wing radicalism seemed a chance to find new directions in life, away from the routine. Moreover, Cherchenko believes that the desirable societal and spiritual changes could only be achieved via Russia, because Israel is a small and dependent state, and has to manoeuvre to survive. The artist took part in many NBP-related protest actions against the Putin/Medvedev regime and in spring 2013 was even temporarily banned from entering Russia.

Yet he denies that his art is an NBP art. “I am a painter of aphorisms and short stories”, he says. Space precludes me from retelling them all. Let us for now concentrate on one of Cherchenko’s central themes, that of memento mori. 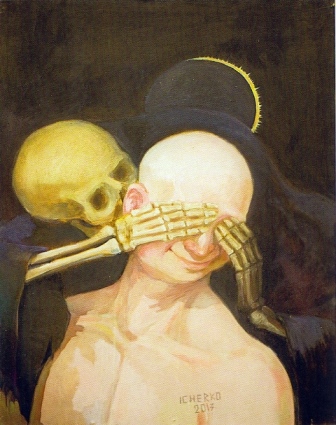 Guess Who (©Igor Cherchenko; reproduced by kind permission of the artist)

Before joining the NBP, Cherchenko was part of an art project called Organisatsiia po bor’be so smert’iu (OPBSS) (‘The Foundation against Death’ (FAD). It seems paradoxical that this movement merged with the NBP, whose favourite slogan (borrowed from Franco’s Falange) is ‘Yes to Death!’ It has to be said, however, that sometimes NBP slogans indicate a direction, opposite to where the party intends to go. On this occasion, its members apparently welcome death for the sake of achieving immortality.

Many NBP members regularly apply a kind of death test to themselves, as they tend to live dangerously (dozens have been jailed and a few have died for their political beliefs). The NBP even refers to itself sometimes as a “party of the dead”, adding the deceased NBP activists to the editorial board of the party newspaper Limonka (‘The Hand Grenade’, 1993-2010; LOU.FMISC2690(1)).

Pursued by the Kremlin for its so-called ‘direct actions’, such as peaceful occupations of government offices while protesting against various government policies, the NBP regularly needs new recruits to reinforce its ranks, depleted by arrests and imprisonments. That is why, irrespective of its neo-Nazi roots, it has always welcomed Jews – as well as Gypsies, Muslims and just about anyone prepared to suffer in the name of the party agenda, based on social concern-cum-nationalism.

The contradiction between the NBP’s neo-Nazi leanings, on the one hand, and its acceptance of Jewish members, on the other, can be observed in Cherchenko’s picture ‘The Flying Nazi’ which fuses several visual motifs (such as Jews flying over a shtetl) characteristic of another Vitebsk-born artist, Marc Chagall, with a highly ambivalent image of an airborne trigger-happy stormtrooper bringing death and destruction to the world of East European Jewry. 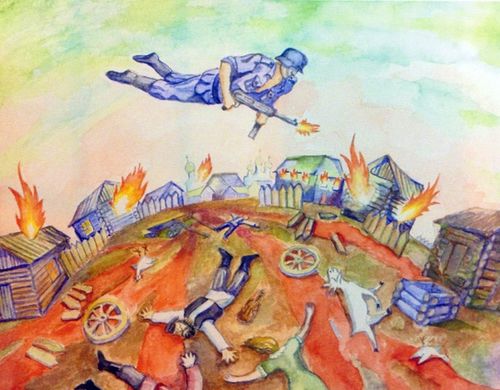 The Flying Nazi  (©Igor Cherchenko; reproduced by kind permission of the artist). Compare, for instance, Chagall’s ‘Over Vitebsk’ (1915-20)

In Cherchenko’s world, death may sometimes be hidden from view but it is rarely too far away, as his ‘Apotheosis of Spring’ demonstrates. 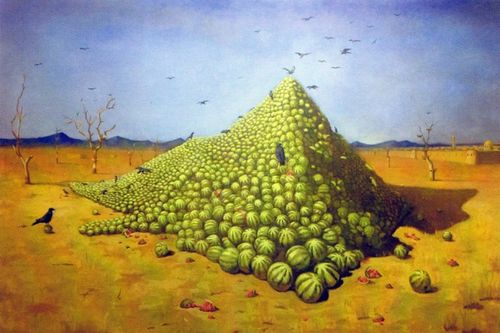 The Apotheosis of Spring (©Igor Cherchenko; reproduced by kind permission of the artist)

The picture was inspired by Vasily Vereshchagin’s ‘The Apotheosis of War’ (1871), with human skulls replaced by watermelons. Only the red fragments of watermelon flesh hint at a violent tension behind the deceptively joyous title.

If these memorable images by Cherchenko are sufficient to arouse the reader’s interest, there’s more where they came from. Whatever people may think of Cherchenko’s politics, his art seems worth writing about.