‘Imagining Don Quixote’, a free exhibition focusing on how Cervantes’ novel has been illustrated over time, opened in the British Library’s Treasures Gallery on 19 January and runs until 22 May. It explores how different approaches to illustrating the work have reflected changing interpretations both of Don Quixote, the novel, and of its eponymous protagonist. The most significant shift has been in the perception of Don Quixote as figure of burlesque fun to noble idealist brought low. This blog post looks at the depiction of Don Quixote himself.

Miguel de Cervantes’ El ingenioso hidalgo don Quixote de la Mancha, published in two parts (1605, 1615), tells how Don Quixote and Sancho Panza, his squire, set out to win fame by righting wrongs and succouring the weak and distressed. Cervantes gives succinct descriptions of Don Quixote: ‘approximately fifty years old; his complexion was weathered, his flesh scrawny, his face gaunt’ (DQ I, 1); later Don Diego de Miranda was ‘amazed by the length of his horse, his height, his thin, sallow face… a form and appearance not seen for many long years’ (DQ II, 16). Even so depictions of Don Quixote have varied over time and differences reflect changing views of the novel. In the 17th century it was appreciated for its burlesque, often physical humour, and character was subordinate to narrative. Illustrators do portray Don Quixote as tall and elderly, Sancho as shorter and more stout, but the contrast is not an exaggerated one, as in this anonymous English illustration: 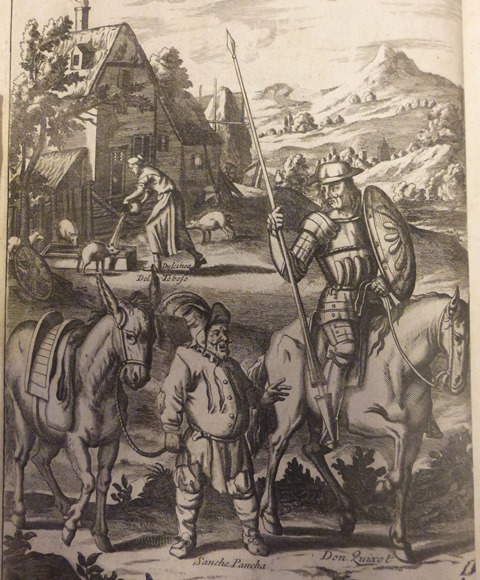 Frontispiece of Miguel de Cervantes, The History of the Most Renown’d Don Quixote (London, 1687) Cerv.336

In the 18th century the editors of the first scholarly edition (1738) saw the novel as a satire directed against fantastical literature which caused readers to confuse fiction with history. They restricted the physical humour in the illustrations and sought to elevate the character of Don Quixote. Here he courteously greets two women as noble ladies, although Cervantes’ text indicates that they are prostitutes (DQ I, 2). 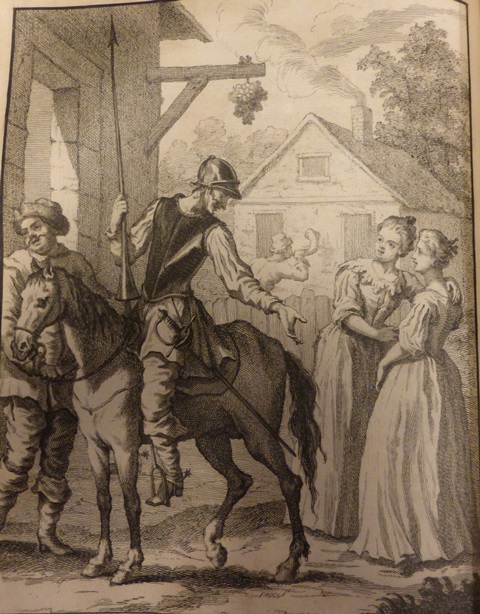 John Vanderbank’s illustration adds a nobility of gesture to Quixote’s height, as prescribed by Cervantes.

One artist was crucial in establishing a sympathetic image of Don Quixote: Gustave Doré (1832-1883). The illustrations of his monumental edition (Paris, 1863) have been reproduced in many later editions. Doré’s Quixote is elongated and thin indeed but his bearing is altogether more heroic, especially in outdoor scenes. This portrayal – looking upwards, lance pointing skyward - accords with the growing Romantic tendency to see Don Quixote as an idealist brought low by harsh reality and the mockery of others (DQ I, 3). 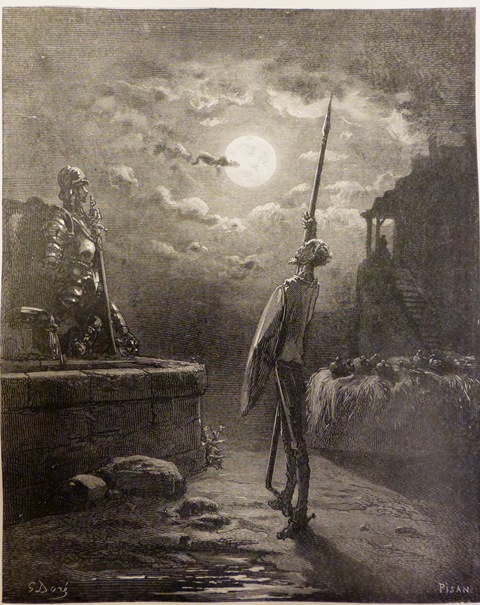 Until around the middle of the 19th century not only book illustration, but also prints, drawings and paintings had depicted specific episodes of the novel. However, Doré’s contemporary Honoré Daumier (1808-1879) focused almost exclusively on the two protagonists. The skeletal figure of the tall, thin knight on a painfully bony horse is instantly recognizable and has become part of our collective imagery. Here, Sancho Panza is represented only by the smaller, rotund figure in the background. 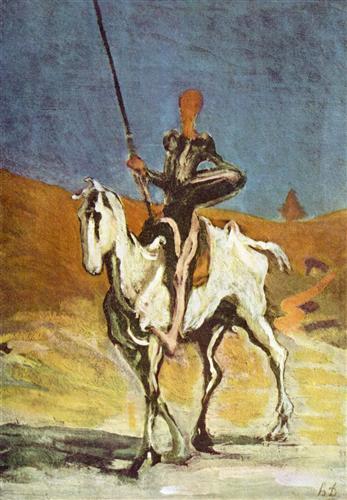 Mention Don Quixote and Sancho today to most people and the image of a tall, thin man, accompanied by a short, fat man will come to mind. And that is without having read Cervantes’s novel. The image they are recalling, however vaguely, is most probably Picasso’s pen-and-ink drawing of 1955. 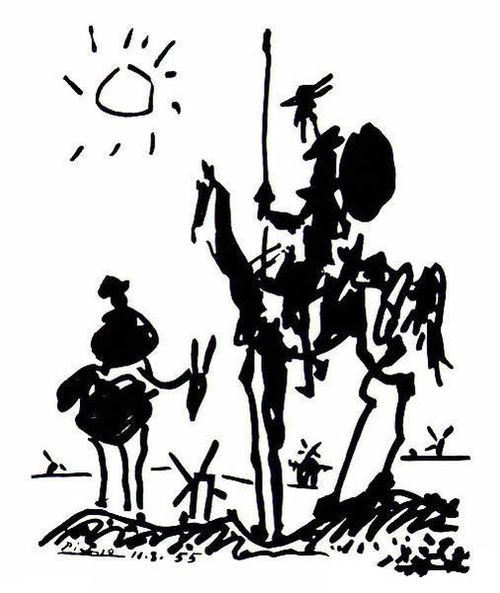 Don Quixote is long of face and body; his horse, Rocinante, more haggard still; by contrast, rotund Sancho Panza sits comfortably on his donkey. Picasso’s drawing continues the restricted representation begun by Daumier in the previous century. Picasso also includes the windmills that appear in the best-known episode, when Quixote mistakes them for giants. The sun makes the drawing more emblematic of Spain.

Separation of the image of Don Quixote from the novel’s narrative has also enabled its use in many other contexts: propaganda, advertising, postcards, playing cards, ceramics, porcelain figurines…  All of which serve to keep the picture of the tall, thin knight and his rotund squire in our collective mind.