When Romain Rolland was born on 29 January 1866 into a prosperous middle-class family in Clamecy, Nièvre, there was little to indicate that he would grow up to be a dramatist, critic and pacifist who would one day win the Nobel Prize. His ancestors included solidly well-to-do farmers, and he would describe himself as an offshoot of an ‘antique species’ deeply rooted in la France profonde.

From the first, his attempts to follow the predictable path towards a respectable calling as a schoolmaster were beset by problems; entering the Ecole normale supérieure at the age of 20, he rejected his course in philosophy to study history and, after two years in Rome, gained his doctorate in 1895 with a thesis entitled Les Origines du théâtre lyrique moderne. Histoire de l'opéra en Europe avant Lully et Scarlatti (British Library Hirsch 1877). 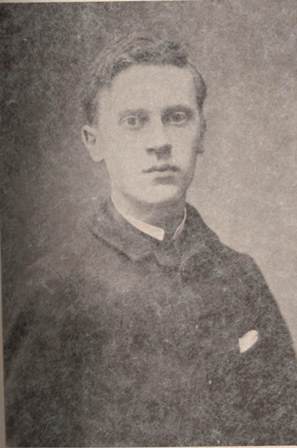 This was to be the beginning of a distinguished career as a music critic and historian which had been launched by his encounter in Rome with Malwida von Meysenbug, governess to Alexander Herzen’s daughters and friend of Liszt, Wagner and Nietszche. After teaching at several Paris lycées while publishing studies of musicians past and present (Les musiciens d'autrefois and Musiciens d'Aujourd'hui ) he became the director of the newly-founded Ecole des Hautes Etudes Sociales and was appointed in 1903 to the first chair of the history of music at the Sorbonne.

However, at the same time he was developing a career as a dramatist. Like Wagner, he believed passionately in the power of theatre as a unifying social force rather than a mere pretext for pretentious display, and advocated a ‘people’s theatre’ going back to the dramatic tradition of the ancient Greeks. In his plays he portrayed the great events and personages of French history, from Madame de Montespan and Louis XIV (1904) to the French revolution in Le Triomphe de la raison, Georges Danton and Le Quatorze juillet, convinced that a people which was truly happy and free would need festivities rather than theatres, and would ‘always see in itself the finest spectacle’, as he wrote in Le Théâtre du peuple. His ideas were enthusiastically adopted outside France, notably by Erwin Piscator and the Freie Volksbühne in Germany.

The transcending of national and cultural boundaries through art was a central theme of Rolland’s writings and of his whole life. Although his retiring nature did not make him a natural teacher, leading him to resign from the Sorbonne in 1912, he spread his pacifist internationalist beliefs through his writings, and, unable to tolerate the chauvinistic patriotism reigning in France during the First World War, he moved to Switzerland, where he published his anti-war essay Au-dessus de la mêlée (‘Above the battle’) published in the year in which he was awarded the Nobel Prize for Literature. His principles enabled him to overcome his natural diffidence and to engage with Mahatma Gandhi  (on whom he published a study in 1923), Sigmund Freud and Stefan Zweig. The latter described their friendship extensively in his autobiography Die Welt von gestern, while Freud acknowledged the importance of Rolland’s influence in his Civilization and its Discontents (1929). He was also a close friend of Hermann Hesse, who dedicated his novel Siddhartha (1922) to him in tribute to their discussions of Eastern philosophy. 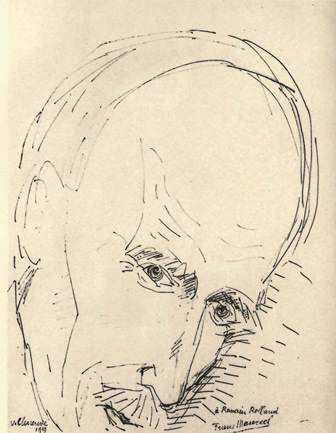 Rolland’s great sequence of 10 novels Jean-Christophe (1904-1912) similarly explores the power of art to bridge cultural differences through the career of his hero, a gifted young German musician who settles in France and acts as the author’s mouthpiece for his ideas on the profound significance of music as a force for human understanding. 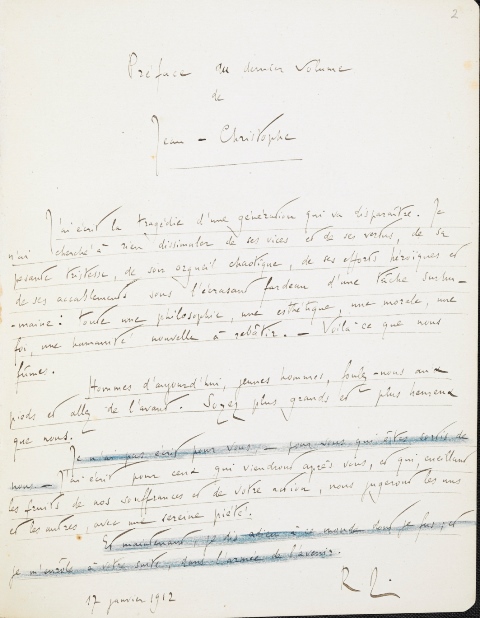 Opening of the preface from Rolland's manuscript of the last volume of Jean-Christophe Zweig MS 184, f.2r

In view of his achievements as a pacifist, including his work as a founding member in 1932 of the World Committee Against War and Fascism, it may seem startling that when, on a visit to Moscow three years later as the guest of Maxim Gorky, he met Joseph Stalin, he declared him to be the greatest man of his time. Although disillusionment set in as he became better informed about Stalin’s treatment of those who opposed him, he continued, with tact and fortitude, to represent the interests of French artists in his dealings with the U.S.S.R. and to campaign for the release of the writer Victor Serge and the Soviet politician Nikolai Bukharin, who was nevertheless executed in 1938. 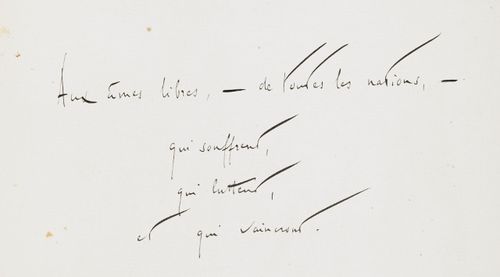 Dedication from the manuscript of the last volume of Jean-Christophe, ‘To the free souls - of all nations - who suffer, who struggle, and who will triumph’

Rolland returned in 1937 to make his home in Vézelay, where he remained in complete isolation throughout the German occupation, working tirelessly on his memoirs, his life of Beethoven, and a study of the Catholic poet Charles Péguy, which he completed not long before his death on 30 December 1944. His message of pacifism and the power of art to speak above narrow political and national interests continues to make him an author of lasting significance in an age which sorely needs to hear it.

Works by Rolland referred to in the text: