“The Englishman or American who wishes to know what the man [Tolstoy] was like in the environment - how he saw himself and was seen by those who shared it, cannot do better than read the long and detailed biography of the great Russian which was prepared by Paul Birukoff from material furnished by Tolstoy himself and often written by him.” (New York Times 25 February 1912). 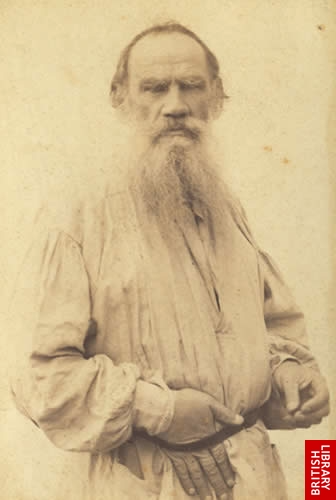 Of course, some Englishmen and Americans were prepared to travel a long way to be able to see Tolstoy and speak to him. This should not be surprising at all, if we remember that from the mid-1890s Tolstoy’s articles were frequently published in major British newspapers. The majority of his essays, both in Russian and English, first appeared in England as a result of the publishing activities of Tolstoy’s friend and supporter Vladimir Chertkov.

One of Tolstoy’s English visitors was Sir Charles Theodore Hagberg Wright (1862-1940), Secretary and Librarian of the London Library. He translated Tolstoy and had the reputation of being a liberal Russophile. Wright visited Tolstoy four or five times from 1890. On 13 September 1908 Tolstoy’s wife Sofia Andreevna noted in her diary that he was among the guests on one of those busy days of Tolstoy’s 80th jubilee. Wright presented Tolstoy with a letter signed by more than 700 English admirers. Apart from books on the London Library, catalogues, and translations from Russian, Wright wrote an essay ‘Books for Russian prisoners of war in Germany’ (T. W. Koch, Books in camp, trench, and hospital) and an introduction to C. E. Vulliamy’s selection of Russian state papers and other documents relating to the years 1915-1918, published in English as The Red Archives (London,  1929; 09455.ff.55.).

The American author Ernest Howard Crosby (1856–1907) was also very much influenced by Tolstoy and visited him in Yasnaia Poliana in 1894. He became the most devoted among Tolstoy’s nearly 70 American correspondents and did much to to promote Tolstoy’s ideas in America. In 1903, Crosby published a book Tolstoy and his Message (012203.e.7/1.) and a year later Tolstoy as a Schoolmaster. 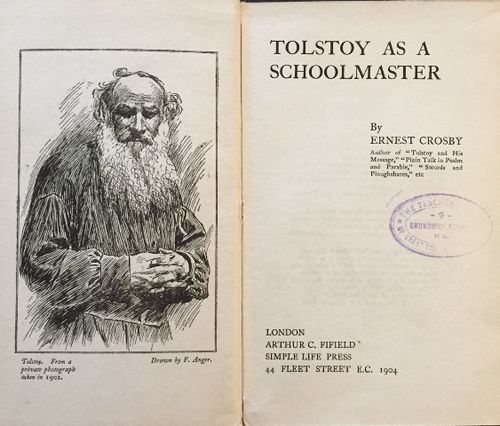 Crosby recommended to Tolstoy certain friends who also wanted to see the great man. One of them was Robert Hunter (1884-1942), an American sociologist, public figure and and socialist, who  left a detailed account of a visit to Tolstoy on 12 July 1903 (Add. MS 52772 ff. 95-108). Hunter wrote what Tolstoy said about the dilemma that was preoccupying him at that time. Tolstoy felt that he should have disposed of his property and renounced all wealth and luxuries, but could not do so because of his wife and family. In the last decades of his life Tolstoy was painfully aware of the fact that his teaching was not in keeping with his family’s lifestyle. The thought that his inability to give away his material goods compromised his principles and beliefs brought him a lot of suffering and finally became the cause of his flight from home in 1910. 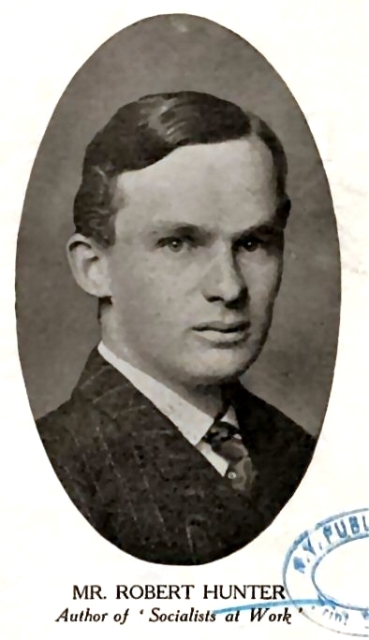 Hunter’s description of his visit to Yasnaia Poliana is kept among the papers of Sydney Carlyle Cockrell (1867-1962), later Director of the Fitzwilliam Museum in Cambridge. He visited Tolstoy in the company of “two American friends” (one of them was Hunter) and also left notes on this visit (Add. MS 5277, ff. 80-87v.). As an art historian, he was particularly interested in Tolstoy’s essay ‘What is art?’ (‘Chto takoe iskusstvo?’) and wanted to know Tolstoy’s opinion on William Morris and the John Ruskin who, in Cockrell’s view, had already said many of the things that Tolstoy stated in his essay. Cockrell’s file also contains photographic postcards of Tolstoy (Add. MS 5277, ff. 109-121).

The first Irishman to visit Tolstoy was the journalist and politician Michael Davitt (1846-1906). He came to interview Tolstoy in June 1904, but also appealed for his support of Ireland against England. Davitt visited Tolstoy again in February 1905, this time accompanied by another journalist and translator, Stephen MacKenna (1872-1934), who interviewed Tolstoy about ‘Bloody Sunday’. MacKenna’s account of this visit was published in The Irish Statesman of 1 October 1927. In his book Iasnopolianskie zapiski: 1904-1910 gody (ZF.9.a.5897) Tolstoy’s doctor Dushan Makovitskii noted that Tolstoy had called the Irishmen “lovely (slavnyi), vigorous and merry people”. In the entry of 19 November (2 Dec) 1907 Makovitskii wrote: “At 5.30 p.m. Mr Leslie arrived, a 22-year-old aristocrat and Irish nationalist. Wants to see a ‘simple life’. LN spoke to him in his study about important issues (ser’eznye voprosy)”.

Sir John Randolph Leslie (1885-1971), who wrote under the pseudonym of Shane Leslie, left accounts of his meeting with Tolstoy in his notes of conversations with him and in a letter to his mother Leonie dated 4 December 1907 (both in the National Library of Ireland). It was also later reflected in his fictional and autobiographical books The Cantab, and Long Shadows. 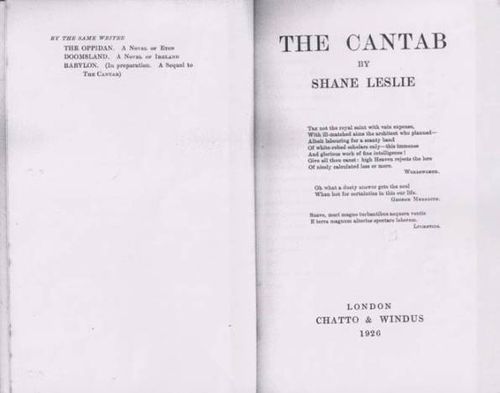 In both books Leslie gives fictionalised versions of his conversation with Tolstoy and sometimes he is slightly ironic. His protagonist “became a confirmed vegetarian and promised to learn to plough”. In real life, the meeting had little influence on either of them: Leslie converted to Catholicism in 1908, never abandoned either nationalism or ‘worldly riches’, and embraced pacifism only after his brother’s death in the First World War.