Don Quixote as Napoleon: propaganda in Spain’s war of independence, I.

Cervantes’ novel Don Quixote (1605, 1615) has not only inspired later writers, artists and subsequently film-makers, but his characters have also been used for other purposes, notably in propaganda and advertising. The behaviour of Don Quixote himself, whether seen as  fool, madman or noble idealist, has made him a most suitable figure for use in propaganda.

In the 17th and early 18th centuries the novel was regarded primarily as a funny book, but this began to change with the publication of the London editions of 1738 (in Spanish) and 1742 (in English) commissioned by Lord Carteret.  The emphasis shifted from slapstick comedy to literary and social satire. The subsequent publication of the Spanish Real Academia’s edition in 1780 elevated the literary status of the novel within Spain itself.  However, the absence of a single predominant interpretation of the novel entailed different attitudes towards the protagonist himself.  This divergence can be seen in some of the Spanish propaganda following Napoleon’s invasion of Spain in 1808 and the imposition of his brother Joseph on the Spanish throne. 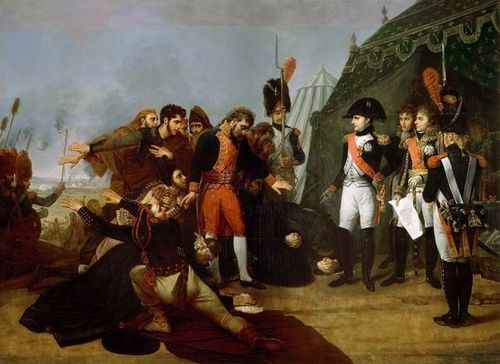 One work in particular demonstrates this double focus: Francisco Meseguer’s El Don Quixote de ahora con Sancho Panza el de antaño (‘Today’s Don Quixote and the Sancho Panza of Yesteryear’). It was published in Spain in 1809 (in Córdoba, Mallorca, Murcia and Tarragona) and then in Mexico the same year –  which was not uncommon for this type of publication.  The British Library has a copy of this last edition (shelfmark 9180.e.6.(30.)), which also contains a coloured print representing the Emperor as Don Quixote. 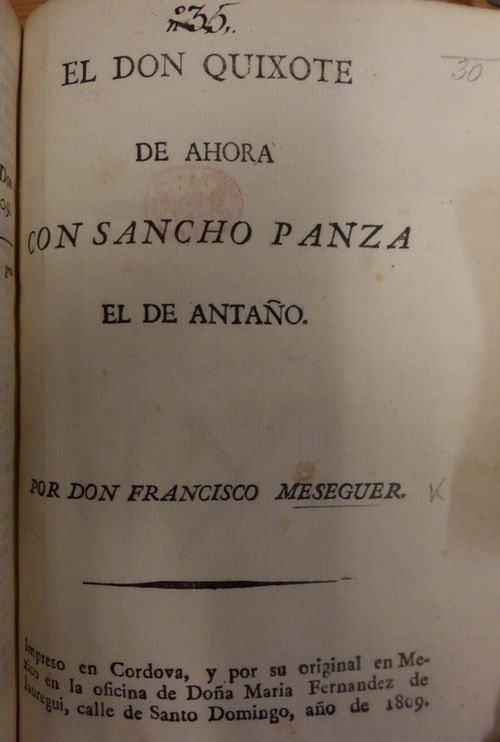 Meseguer’s work recounts a dream in which the narrator overhears a conversation between a modern-day Quixote and the original Sancho Panza.  After a brief introduction, it takes the form of a dialogue between the two in the manner of the conversations between Cervantes’ original knight and squire.  The modern-day Quixote is immediately identified with Napoleon, but as the ‘Caballero de la mala figura’ (‘Knight of the Evil Countenance’), a variation on Quixote’s epithet ‘Caballero de la triste figura’ (‘Knight of the Sorrowful Countenance’).  However, Sancho remembers not just the unwise actions but also the aims and ideals of his original master.  Therein lies the ambivalence.

Sancho recalls three adventures from Part I of the novel: the attack on the flock of sheep, the freeing of the galley slaves, and the Princess Micomicona episode, each an example of Quixote’s folly or delusion. At the same time he succeeds in either highlighting one of Don Quixote’s virtues or in turning the argument back against Napoleon.  Don Quixote showed great bravery as, in his delusion, he actually believed the sheep to be a large opposing army.  Sancho draws a parallel between the freeing of the galley slaves (who turned on Don Quixote when he bade them go and pay homage to Dulcinea) and Napoleon’s one-time support for Manuel Godoy, since both actions were futile given the bad character ascribed to both the slaves and the very unpopular Spanish Prime Minister. 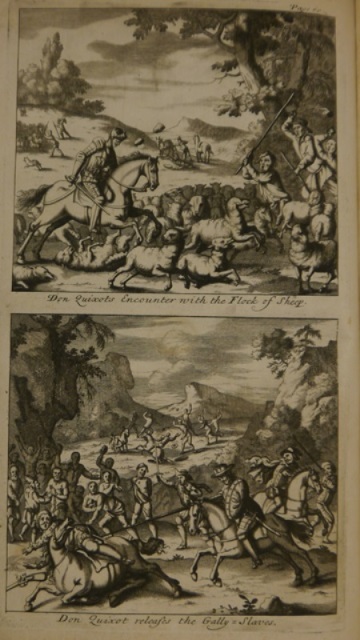 Don Quixote attacking the flock of sheep (top) and freeing the galley slaves (bottom). From The History of the most renowned Don Quixote of La Mancha... (London, 1687). Cerv.336.

According to Meseguer’s Sancho, the Micomicona episode gave his master the opportunity of usurping the throne of the pretend Princess, an opportunity he ignored in contrast to the actions of Napoleon in Spain, who placed his brother, Joseph, on the throne. Moreover, Quixote demonstrated great fidelity to his lady Dulcinea by declining to wed the Princess who is part of the Priest’s plan to get Don Quixote safely back home.  Finally Sancho, recognising reality, recalls how so many of his master’s rash adventures ended in disaster, but, he adds, this will also be the fate of Napoleon’s Spanish expedition.

The nub of Sancho’s case is that the original Don Quixote was a true knight errant who wished to right wrongs and to protect the weak.  Napoleon, on the other hand, is the very opposite: his soldiers ‘have ruined countless maidens, raped married women and widows, leaving in tears those who were living happily, abandoned those who were well protected, and orphaned those who had a father’.  He also opposed loyal Spaniards such as Fernando VII and his supporters, favouring instead the likes of Godoy in furtherance of his personal ambition.

There is also a divergence between the description of the ‘Today’s Don Quixote’ and the one of yesteryear.  Sancho says the latter was ‘tall as a pine tree, lean… and solid as a rock’, while Napoleon/Quixote was ‘short of stature’ and had a ‘face like a monkey’.  This brings us neatly to the cartoon in the Mexico edition, which will be the subject of a second blog post.

A copy of the Córdoba edition can be consulted at: https://archive.org/details/eldonquixotedeah00mese