Don Quixote as Napoleon: propaganda in Spain’s war of independence, II: the print.

The Mexico edition of Francisco Meseguer, El Don Quixote de ahora con el Sancho Panza de antaño, was published in 1809, after the Córdoba edition of the same year. It includes a the coloured fold-out cartoon apparently not present in the Spanish editions, which focuses on the situation in Spain in 1808 sometime after the ‘Dos de Mayo’ uprising in Madrid against the French. 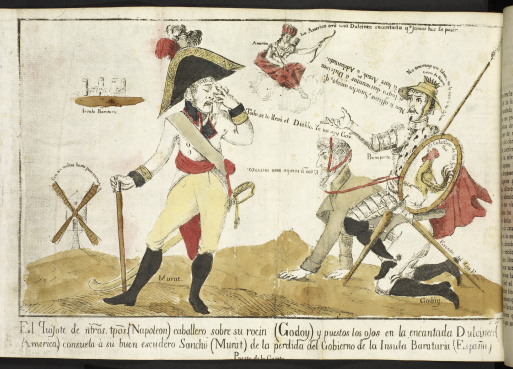 During the confused period in Franco-Spanish relations, 1807-08, Spanish Prime Minister Godoy had in effect collaborated with Napoleon who, according to the historian Raymond Carr, despised him. Godoy, cast as Rocinante, the figure to the right on all fours, admits ‘Esto y mucho mas merezco‘ (‘All this and more I deserve’). In March 1808 Godoy’s ever increasing unpopularity in Spain prompted his dismissal by Carlos IV, who himself abdicated in favour of his son Fernando. 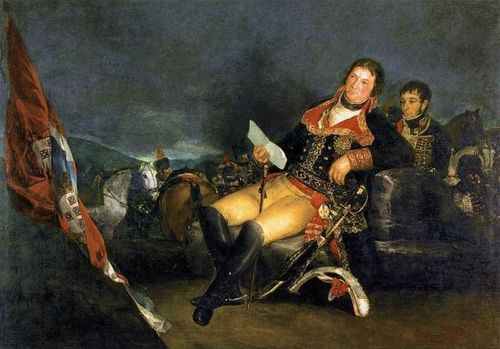 The ambitions of General Murat (as Sancho, in centre), Napoleon’s lieutenant in Spain, were frustrated after the brutal suppression of the Madrid uprising: ‘Todo se lo llevó el Diablo. Ya no soy gov[ernad]or’ (‘The Devil has taken everything. I am no longer governor’), he laments. ‘Insula Barataria’, depicted as a castle to the left of Murat, refers to the make-believe island of which Sancho Panza was made governor in one of the practical jokes devised by the Duke and Duchess in Part II of Don Quixote. 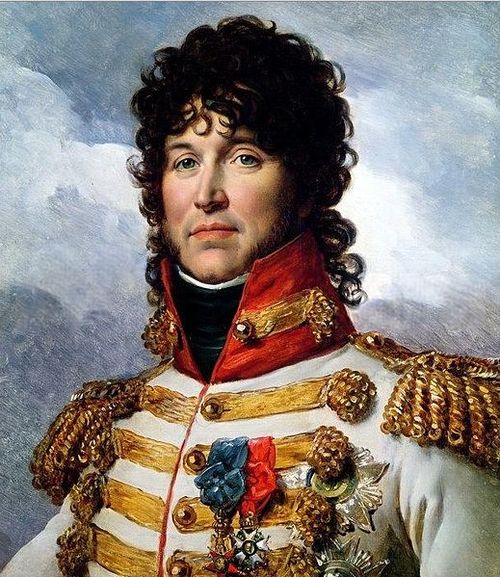 The consolation offered to Murat by Napoleon/Quixote is a possible role in the Spanish colonies: ‘q[u]e si logro desencantar a Dulcinea te hare Arzob[is]po u Adelantado’ (‘if I succeed in disenchanting Dulcinea, I shall make you Archbishop or Governor’). This is a further allusion to Part II of Cervantes’ novel in which Sancho Panza convinces his master that Dulcinea’s appearance as a peasant girl is the work of enchanters.

America is represented as Dulcinea (top, centre; detail above) but in the guise of a woman wearing a native American headdress. The text reads ‘La América será una Dulcinea encantada q[u]e jamas has de pose[e]r’ (‘America shall be an enchanted Dulcinea that you will never possess’). The focus on the colonies in the cartoon is consonant with the reprinting of the work in Mexico. Following the French invasion of Spain and the imposition of Napoleon’s brother, Joseph, on the Spanish throne, Mexicans either affirmed their allegiance to Fernando VII or sought independence. 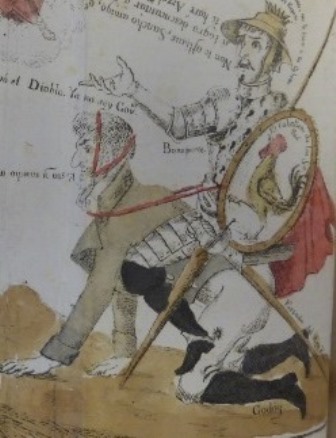 Bonaparte, represented as the ‘Quixote of our times’ (above), is depicted much as Don Quixote had been in the many editions of the novel hitherto. He wears ancient body armour and on his head the so-called helmet of Mambrino, in reality a barber’s basin. The basin-helmet is labelled the crown of Spain, with the caption ‘No tiene encaje este yelmo, no le biene á tu cabeza’ (‘This helmet does not fit; it is not right on your head’). His shield however has the emblem of the Gallic rooster and the motto ‘El caballero de los gallos’ (‘The Knight of the Roosters’). Napoleon is somewhat thin, but not short of stature, as the Emperor was usually depicted and is indeed described in Meseguer’s text.

The windmill (far left) references the most famous episode of Don Quixote (Part 1, ch. 8). The caption reads ‘Con un molino basta para asorarte’ (‘A single windmill is sufficient to put the wind up you’). Don Quixote was brave – and rash – enough to charge one of the group of windmills. The fearsome sight of just one would have been too much for Napoleon, ‘The Quixote of our times’? The ambiguity, bravery-rashness, takes us back to the ambivalence of Meseguer’s text.