Martín Martínez (1684-1734) was a major figure in the reform of Spanish medicine. 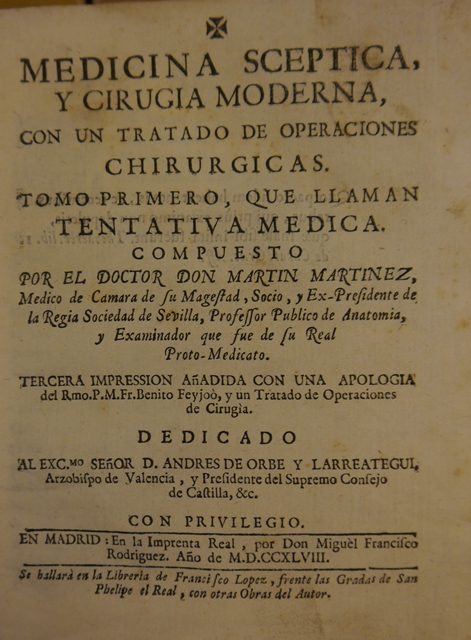 This newly-acquired book is a nice example of how in times earlier than our own there was no division between the Two Cultures: in the 18th century scientific works had to written with literary style.

Science in Spain was still heavily dependent on unquestioning acceptance of the authority of the Greeks and Romans. But Martínez was a sceptic, defined by the first dictionary of the Spanish Academy as: “adjective applied to a certain philosophical school, which affirmed nothing and defined nothing, and was empoyed only in impugning the opinions of others, doubting everything” :

Note that for the Academicians these Sceptics lived (past tense) in Antiquity.

This work on modern medicine takes the form of a dialogue between Galenico (a follower of Galen), Chimico (a chemist) and Hippocratico (a follower of Hippocrates). But the author, as a true sceptic, is not himself mired in the past: he cites “Hyppocrates, Erasistrato, Celso” [all ancients] but also “Boyle, Sidenham, Capoa, Silvio, Gassendo ... and the most celebrated men of the last century” (I, Introduccion, e3r).

Although the language of medicine in the 18th century was still Latin (the language in which he read those foreign worthies cited in the previous paragraph), Martínez writes in Spanish, because “mejor es saber en Romance, que ignorar en Latin” [it is better to be knowledgable in the vernacular than ignorant in Latin].

If there was a controversy going in 18th-century Spain, Father Benito was not going to be left out. Here he weighs in with a defence of his fellow sceptic and doubter of authority.

An added interest is the contemporary soft parchment binding, with bead and loop fastenings. In this case, as usual, the loops are there and the beads have gone. 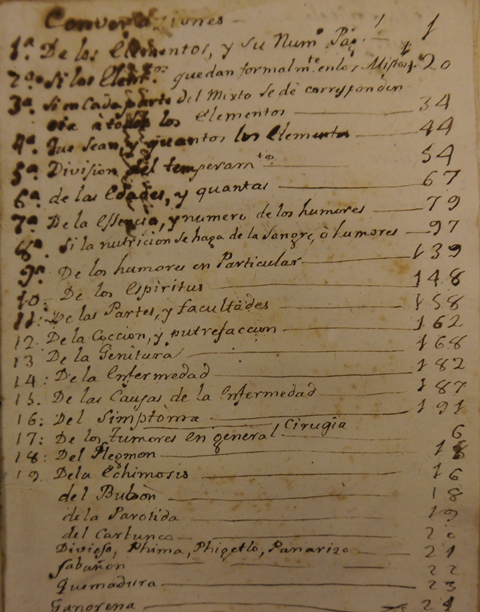 This book fills a gap in the British Library’s collection which goes back to 1955. In that year the Library acquired a pamphlet written in defence of the Medicina sceptica: 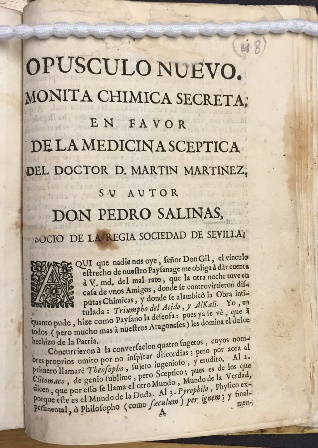 And now we know what the fuss was about.