A picture is worth a thousand words?

How much truth is in a proverb? Perhaps, you, dear reader, were pondering this question the last time you heard someone saying ‘Necessity is the mother of invention’ or ‘The pen is mightier than the sword.’

Proverbs have a long history, some going back all the way to antiquity, and they are an important part of many languages. Each culture and each generation can form new proverbs or cause others to die out. Moreover, equivalent proverbs exist in multiple languages to express similar sentiments, e.g. the German proverb ‘Morgenstund hat Gold im Mund’ and the American ‘The early bird gets the worm’ essentially mean the same thing.

When it comes to their truthfulness though, proverbs evade any concrete assessment by being both ambiguous and contradictory. This does not usually become apparent in conversations, because we always choose a proverb to fit a situation, which makes them appear to be of universal wisdom. 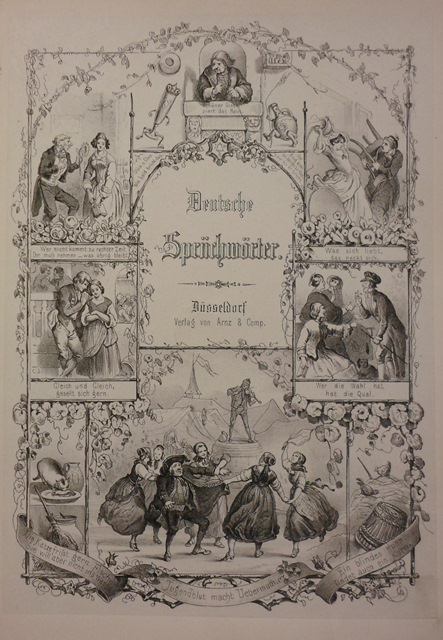 The illustrations in Deutsche Sprüchwörter und Spruchreden in Bildern und Gedichten (‘German Proverbs and Sayings in Pictures and Poems’) explore the meaning of proverbs by creating specific situations to match various German sayings, many of which are still in use today. An interesting example is the image that accompanies the proverb ‘Nach gethaner Arbeit ist gut ruhen’ (‘After finishing work, one can rest well’). 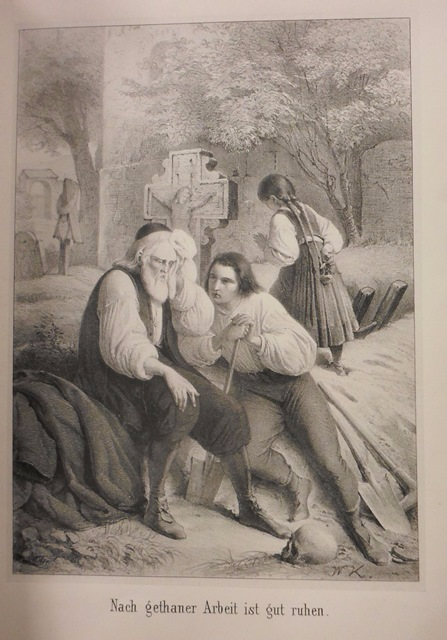 The illustration ingeniously portrays two meanings at once: firstly, the old man as a gravedigger who just finished a day’s work and can now relax; and secondly, the old man at the end of a strenuous life, ready to finally rest in peace. The young girl looking into the grave might even underline the meaning of the proverb by contrasting it with its opposite, namely that an untimely death is never peaceful – for the person or their family.

Another fascinating example is the illustration that goes with ‘Der grade Weg, der beste’ (‘The straight/direct path is the best,’ the equivalent of ‘Better beg than steal’). 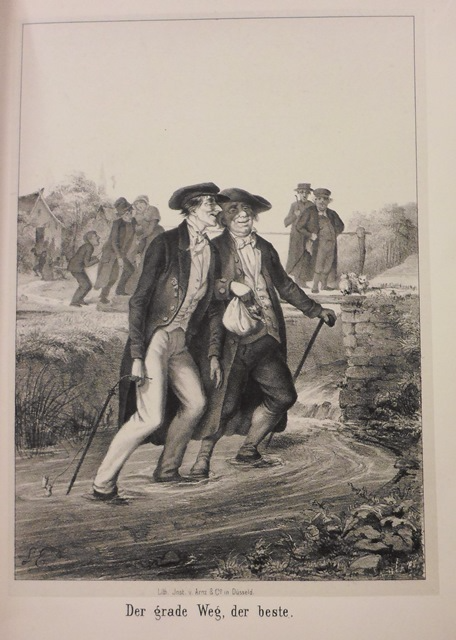 As you can see, here the illustrator opted for a literal and rather ironic representation of the proverb. Again, multiple readings are possible: perhaps the two men should have gone directly to church without stopping at a pub and getting drunk, which only made them end up in a riverbed; or they show us that if the direct path is through a riverbed, maybe you should accept that you have to walk longer to take the bridge but at least that way you will not make a fool of yourself.

Proverb expert Wolfgang Mieder states that the truly marvellous thing about proverbs is their ubiquity. Proverbs do not only exist in many languages, but they have also inspired a lot of literary and artistic work. A prominent example is Pieter Bruegel’s painting ‘Netherlandish Proverbs’, in which he portrayed at least 112 common sayings. Especially for proverbs in English, Shakespeare’s influence has to be mentioned. The bard, whose 400-year anniversary the British Library celebrates with an exhibition which opens on 15 April, has coined a large number of proverbial sayings still used today. Mary Cowden Clarke’s 1848 collection of Shakespearean proverbs is a beautiful little volume worth checking out. 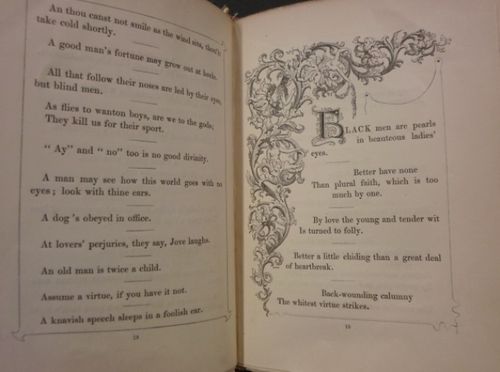 Sample Page from Mary Cowden Clarke, Shakespeare Proverbs; or, the Wise Saws of our wisest poet collected into a Modern Instance (London, 1848) 1344.a.20

You can find a list of all the proverbs identified in Pieter Bruegel’s painting here: https://en.wikipedia.org/wiki/Netherlandish_Proverbs

If you can read German, the Deutsche Welle has a really interesting interview with Professor Mieder on its website: http://www.dw.com/de/no-pain-no-gain-warum-wir-immer-noch-in-sprichw%C3%B6rtern-sprechen/a-18809256